Immortals Fenyx Rising is Ubisoft’s upcoming action-adventure game about Fenyx, a winged demigod who must save the Greek gods and the world they live in from peril. Though we strongly dislike the name change from Gods and Monsters to Immortals Fenyx Rising, we still think this game is a lot of fun based on our hands-on preview a couple weeks back. In the video below, our Press X to Podcast crew discusses their initial thoughts and impressions that you won’t want to miss — just hit play on the video below to join our conversation.

Right off the bat, we think Immortals Fenyx Rising is what you’d get if you took Assassin’s Creed: Odyssey, stuffed it full of Greek mythology, and then crossed it with a totally over-the-top Breath of the Wild. The game feels heavily influenced by Breath of the Wild; with an emphasis on using a stamina meter both in combat and when climbing or flying. The art style and light crafting system are also very reminiscent of BotW, but the game plays much smoother in its combat. We found it to be a rather dynamic fighter, and the game as a whole certainly feels as if it were built on an Assassin’s Creed engine.

The design of the mythological creatures and the variety of beasts is outstanding. Greek favorites like Medusa and Minotaurs are plentiful, and their designs are a cool balance between cartoonish and terrifying. Even regular animals like Lions and Bears have fun design twists, while combat with each of them is more than a mash fest. 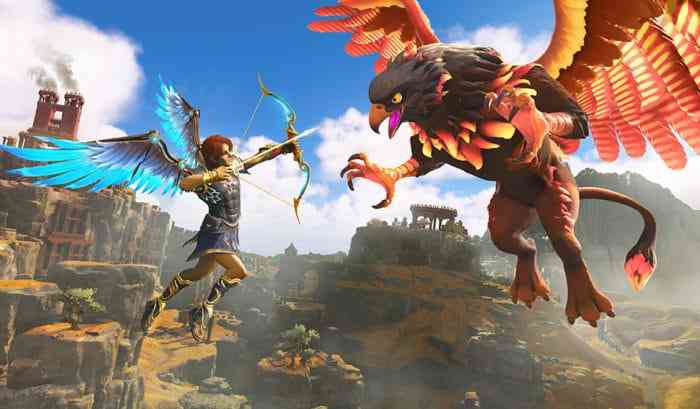 We didn’t get much of a look at the upgrades and RPG-lite elements of the game, but we did extensively explore the available land mass. As we said before, it’s very Breath of the Wild, though not as utterly seamless as that game was. You can climb most surfaces with no trouble provided you have the stamina, though we were occasionally held back by Fenyx failing to clamber up onto a ledge or not recognizing inputs quite right. It’s the sort of thing that could be sorted out by launch, but it served as a reminder of Assassin’s Creed’s infamous limitations.

We look forward to sharing more about Immortals Fenyx Rising, but in the meantime, we’d love to hear your thoughts on the game so far. Are you looking forward to Immortals Fenyx Rising? What do you think about the name change? How do the monsters and world look so far? Share your thoughts with us in the comments below, and don’t forget to subscribe to us on Youtube and follow us on Facebook and Twitter for more video game content like this!