Forza Horizon 4 in Lego is Pure Magic in Gameplay Video

When we think of Lego in video games we think of those adorable and quirky action platformers that span an incredible number of franchises including Jurassic Park, Lord of the Rings, Harry Potter, Star Wars, and so many more. The Lego games – much like the bricks they are made of – are all about fun and creative inspiration, but they have always been a bit slower pace to be accessible to everyone in the family. At the Xbox press conference this year we saw a new side to Lego that we had only dreamed of: Forza Horizon 4: Lego Speed Champions. The trailer they showed floored us, blending Lego and real-world vehicles in a manner not unlike their previous Hot Wheels update for Forza Horizon 3, but how does it look in action? Check out our gameplay footage below to find out.

Forza Horizon 4: Lego Speed Champions is the latest expansion in the Forza franchise, taking the absurdity of the previous entries Hot Wheels expansion and putting colorful, physics defying tracks in with real world vehicles up several notches by seamlessly blending Forza’s iconic attention to detail with Lego’s wacky, over the top styling. Players will be able to race Lego versions of their favorite vehicles not only through the Lego world generated in game, but blend the gameplay with the hyper-realism the Forza franchise is known for. This means you can meep your way along the country roads at break-neck speeds in a Lego mini, or barrel through brick fences in a McLaren. 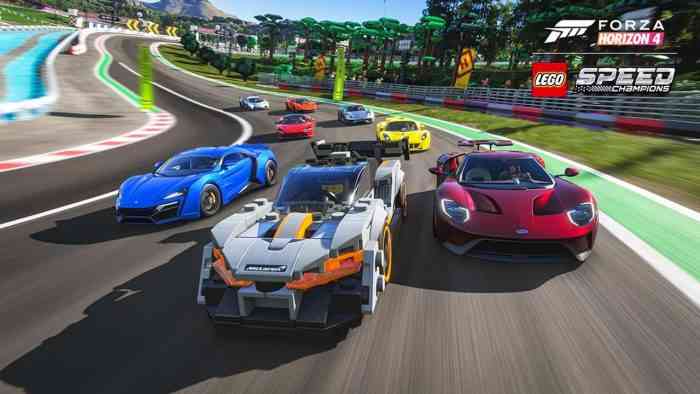 Forza Horizon 4: Lego Speed Champions is available now on Xbox One and PC. For more information, check out the game’s official website.