Xenoblade Chronicles 3D Review – Is the Same Adventure Worth the Money All Over Again?

It was a dark and stormy night. People were looking to get out of the rain, maybe curl up with a good book; some tea or hot cocoa in hand. Many, at dreary times like this, seek the comfort of a good story to set their mind at ease. Story telling comes in many shapes and sizes and it comes in many forms. Most people like to experience a story for themselves, but others…others come in search of reviews. It was just about closing time at the video store when I got the text. “Your next review is here”. My next review…what could it be? My mind raced with all the possibilities. “It could be anything” I murmured under my breath. I got nervous. What if it was bad? I’m allergic to bad games; they give a nasty case of the angries. Then it happened again, a second text. This was it, the moment of reveal. My palms began to sweat, my heart raced, I held my breath and opened the message. “Xenoblade Chronicles 3D” it read. Oh good…a solid title. Now I only need to play over a hundred hours of content in a week. Much better.

Xenoblade Chronicles has often times been described as the Wii’s swan song. One final glorious hurrah before the release of the Wii U. Those many descriptions are not be wrong. Well Nintendo thought it would be a good idea to bring this game to the world of handheld consoles and onto The New 3DS. In terms of size, it would be insulting to describe Xenoblade as anything less than glorious. Your adventures in this Action-JRPG send you running across the lifeless remains of two ancient titans, which as the lore implies, did battle for countless ages before finally succumbing and becoming the platforms for life that they are today. The game leads off explaining that there is a war between the Hom; inhabitants of the titan Bionis, and the Mechon; inhabitants of the titan Mechonis. As the young Shulk, you must pick up the Monado; a powerful blade capable of cutting down Mechon with ease, to save your people from a catastrophic mechanical invasion of your world.

Gameplay, as I mentioned before, falls into the Action-RPG genre. Like all other RPGs of its type, you level up, find new equipment, and learn interesting new skills all while experiencing the deep and large narrative. It also has trace elements of MMO style gameplay, allowing you to pick up many optional side quests in each area to earn you additional experience and items. Combat in Xenoblade is strange if you’ve played many other role playing games before this. It begins by targeting and attacking a wild enemy (much like you would in many MMOs). After combat begins, you get a sort of scroll bar along the bottom of the screen which can be navigated by pressing side to side on your d-pad. This type of control means you can only ever control one person in your party at a time. While simple enough, the lack of overall control of your whole party leads to some minor complications when needing to accomplish certain tasks. 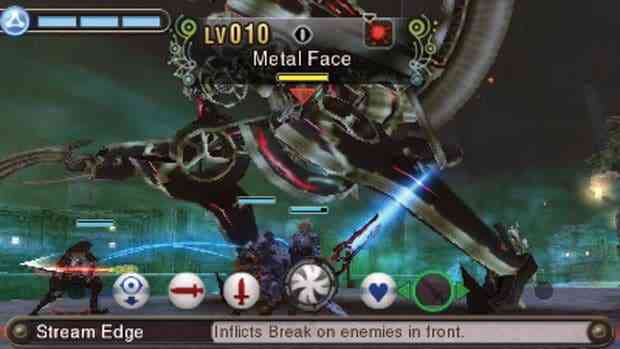 A necessary combat strategy in many cases is something called “topple”. This premise has you knocking over an enemy before you can deal any sort of damage to it. While it sounds easy enough, and it is if done correctly, toppling can only be accomplished by chaining certain attacks from different party members together. Because this strategy is required in some fights, and you cannot directly control your entire party, you sometimes end up in situations where you have to cross your fingers and hope the computer A.I. does its job correctly allowing for the right attacks to be used. If this doesn’t happen, it can be a bit frustrating at times as you try again to start of the chain once more.

Being the first significant piece of exclusive software to Nintendo’s New 3DS, Xenoblade Chronicles did a good job of making use of all the machines new toys. Navigating the in-game world would be nearly impossible without the New 3DS’s shiny new c-stick. The camera pans smoothly, and despite the c-sticks diminutive stature, it feels really, really good. Not once did my thumb slip while pushing against the tiny direction-changing nub. The newly added ZL and ZR buttons are used to zoom the camera in and out should the mood strike you to look at the world through an ever so slightly different lens.

Xenoblade 3D’s new feature (yes singular, just one) to the 3DS version is its collections mode. While somewhat interesting on its own, it’s made even more interesting if you are lucky enough to own a , as of writing this review, VERY hard to find, rare Shulk amiibo. By making use of the NFC reader in the New 3DS you can tap your Shulk down and receive points which can be redeemed for items like game-models and music. Using this method gives you three tokens per day, which can either be spent all at once to guarantee yourself something new, or used individually for only a chance to add upon your collection. These tokens can also be earned using the StreetPass feature of the New 3DS as well, or your seldom touched Play Coins. Each token can be purchased at the cost of five Play Coins while additional tokens can be earned by simply passing others and using the StreetPass feature for the title. 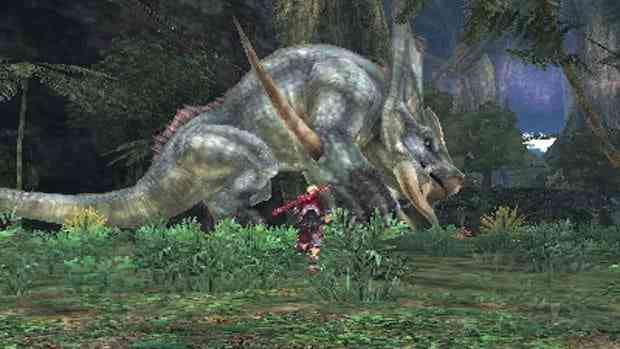 Like everything else in Xenoblade Chronicles, art assets remain completely identical to its original release on the Wii. On the whole the games graphics can be described as visually breathtaking and its new 3D presentation only helps to reinforce that. The entire game’s scope is impressive, with each new zone seemingly larger than the last. Wildlife runs to and fro wherever it likes as if were actually a living breathing world. Many grand landscapes and monuments put everything to scale and help you get that feeling of just how big this game world is. But if I had to be honest, Xenoblade Chronicles looks its best from a distance. Just like its former self, my biggest complaint is in the games textures. When you zoom in close everything looks muddy. Character and monster models lack a certain “cleaness” to them. This wouldn’t be an issue normally, but being part of the story heavy genre that it is, there are many cut scenes that throw the characters, and close up action, right in your face, and this is where the muddiness rears its ugly head.

The music in Xenoblade Chronicles is hands down my favorite part of the game. I’m not shy to say that some of the music is downright inspiring. Monolith really got this part down. The battle theme, like in many other games, will change depending on the difficulty of the enemy you have engaged. In Xenoblade, this happens dynamically as enemies run into you. The overworld theme also changes for each area depending on what time of day it is. During the day you get the standard theme for each zone, but at night, things calm down a little to give you a sense of tranquility. Xenoblade Chronicles also sets itself apart with its voice acting. Instead of a generic American accent, the characters spout British ones, which while a simple change, it is an effective one to make the game feel just a little bit different.

Xenoblade Chronicles 3D stands on its own just as well in portable form as it did on the Wii, but be forewarned that they really didn’t change anything from the console version. That’s not exactly a bad thing though as the original was such a good game. This is where the problem lies though, if you’ve previously played the game on the Wii and would love nothing more than to play the game on the go you have to remember that it can’t even be played unless you shell out an additional $239.99 for the new handheld console needed to run the damn thing. So with at in mind, it loses some if its “appeal” for returning fans when you consider this. In the end, I can’t tell you how to spend your money, but what I can tell you is that for somebody who hasn’t already played Xenoblade Chronicles and just happens to have the New 3DS, or the money to buy one, it’s pretty much a must have, and for those wanting to play again, if you are without Nintendo’s newest handheld and really want to play the “portable” version, take a look in your wallet and think “can I afford what it will cost to play this game once again?”