Wunderling DX is a free update to Wunderling, an indie platformer released by developer Bitwave Games released in 2020. It introduces a new world, cosmetics, and other features into the game, giving Wunderling new life in 2022.

The premise is simple: you play a goomba instead of Mario. A goomba who can jump.

What makes the goomba you play as different, though, is that it can’t control the direction it moves in. The little creature (not actually a goomba, and I’m going to stop calling it that now) moves back and forth without your control. This subverts traditional platformer expectations as the player navigates each stage while working with and around this mechanic.

Not being in control of your character’s direction makes you get creative. Even better, Wunderling DX gets creative with you. The levels get increasingly inventive and continue to play with the goomba-esque (last one, sorry) nature of the game. Wunderling DX starts its players off with only one usable button – the jump – before slowly upgrading your little lad. Eventually he’s able to zoom around and wall jump, among other bounces.

I only have one disagreement with the game’s mechanics, and it’s that you die if you don’t consume a flower for too long. Basically, if you get stuck, you’re punished for it. Trying to solve puzzles was frustrating because I’d get interrupted by my own flower-starvation deaths every few seconds. Then, finally, after dying of starvation five times, I’d figure it out, only to die one last time just as I’m nearing the end. It made what should have been satisfying moments incredibly frustrating.

Not all Heroes Eat Vegetables

Many platformers don’t include or consider their plots much, but Wunderling DX has fun with its premise. You play the first level as Carrot Man, a Mario-esque hero with a smart mouth on a quest to free the obviously named Princess Pea. An evil witch evolved your little player character from a basic lackey in an attempt to stop the hero. Technically, you’re the bad guy. But here’s the thing: Carrot Man is also kind of a jerk. I was invested in Carrot Man’s whole deal, and I laughed whenever I was supposed to. Wunderling DX’s story probably isn’t worth playing the game for by itself, but it adds quite a lot to the gameplay and atmosphere. 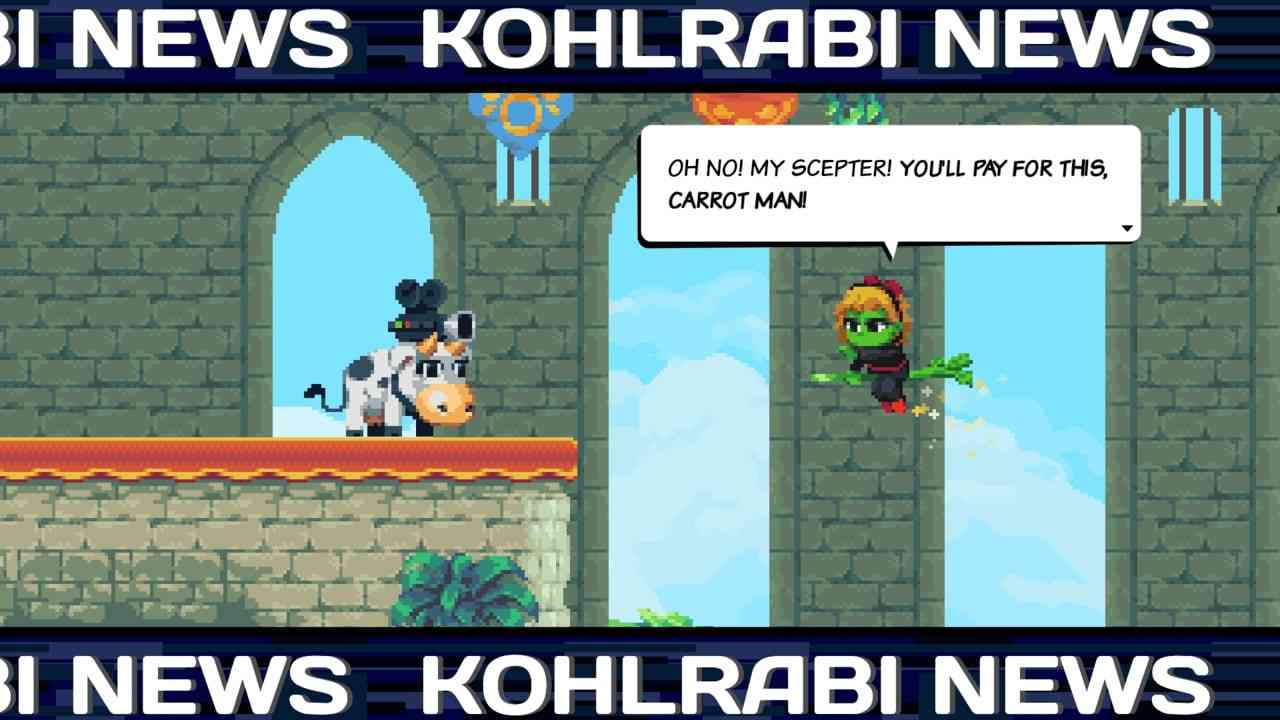 I didn’t play Wunderling DX before the big update, so I don’t know what it was like before the new content dropped. I believe the cosmetics are new, or at least upgraded, and I think that was a neat addition. You get cosmetics through bonus chests you can go out of your way to find, rewarding players who want more challenging gameplay with fun clothing.

Wunderling DX is a fun, competent platformer that any fan of platformers will find unique and compelling. But if you’re not already inclined towards platformers, you’re not going to be swayed by this one. I know this because I’m realizing something about myself: platformers aren’t really my thing. I wasn’t invested in unlocking every secret, so I didn’t strive for the extra chests.. The puzzles were well-built and challenging, but I wasn’t in it for the right reasons

This is a personal problem, of course, but it says plenty about the game, too. Wunderling DX isn’t the kind of game-changing platformer that’s going to draw in all kinds of crowds. That said, the story adds a fun punch to the gameplay while its mechanical twist is worth checking out for fans of the genre. If you love platformers, Wunderling DX is a well-designed, inventive one of those. If you don’t, it’s not going to change your mind.