The Witch and the Hundred Knight 2 Review – Colorful but Dull

The Witch and the Hundred Knight 2 Review

The Witch and the Hundred Knight 2 seems to promise a lot that it is unable to give. Released in February 2017 in Japan, the game only recently made its way to North America and Europe in late March 2018. Not meant to be a sequel to its predecessor, The Witch and the Hundred Knight 2 focuses on a different witch and storyline. For this reason, it is possible to play the second entry without knowing anything about the first one; in addition, the game starts slow and tutorials are inserted at appropriate moments. However, the quality of the story is lower than expected, leading to a rather boring adventure.

At the beginning of the game, we are introduced to Amalie and Milm, two sisters who have lost their parents to a witch. Milm comes home with a cut on her forehead, a mark that the villagers recognized as the Witch Disease, a horrible and mysterious disease that turns humans into witches. A hunter from the village offers to end Milm’s life quickly so she would not have to suffer, but Amalie fights against the idea of losing her only family member and instead offers to leave the village with Milm. A year later, Milm is undergoing surgery but unfortunately, it fails and the witch overtakes Milm’s body, naming herself Chelka. Chelka brings life to Milm’s doll, Hundred Knight, and with the birth of our playable character of the game, the story begins. 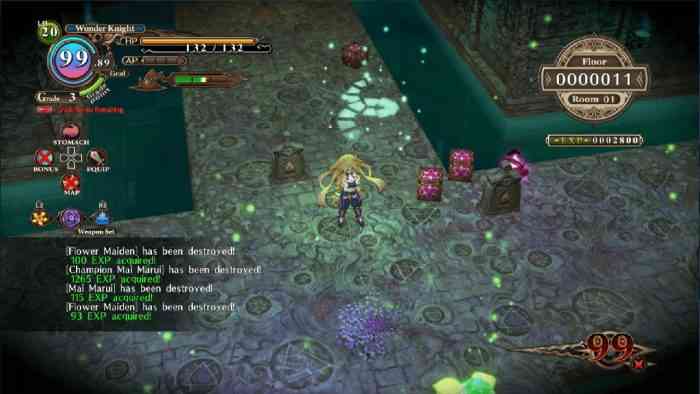 As the player, we are able to control Hundred Knight’s movements and decisions, fighting enemies and determining answers to other characters’ questions as a form of Self Assertion. These answers can decide the path the game will take, but I personally would not stress too much about choosing the best answer. While the plot seems intriguing and offers many different paths for it to take, there seems to be a lack of creativity when it comes to the script. Most of the story is drowned in needless conversations and jokes that are unrelated to the entire game. Although there is the option to skip the dialogue, there is always a chance you might miss something interesting. And while it may seem tedious at times, fun characters are randomly introduced (like a drag queen raven, my personal favorite addition to this game), making the cutscenes a little easier to bear.

Hundred Knight can equip up to five weapons and change forms, known as facets. Facets allow the player to cycle through different weapon combinations for different situations. While this may seem like a great idea, fights are mostly button-mashing and hoping for the best when you try to dodge an unforeseeable attack. Don’t get me wrong, facets are extremely advantageous in the game, but the battle system could definitely use more improvement to make this feature more enjoyable.

“…while it may seem tedious at times, fun characters are randomly introduced…, making the cutscenes a little easier to bear.”

Another thing for players to be aware of is Hundred Knight’s GigaCalories and AP gauge, the former decreasing as time goes on and the latter used for special attacks. GigaCalories are basically your energy level, and when it hits zero Hundred Knight becomes very weak. However, the developers have come up with a smart tactic to gain your GigaCalories and AP back – if you can perform five consecutive strikes on your enemies, you can then land an extra hit known as Depletura. Depletura is especially useful as item drops are pretty random and sometimes you may not have the means to regain these energy levels. By activating Depletura, the weakest enemy around you is killed and you can receive GigaCalories and AP.

When it comes to graphics and sounds, it is actually not bad at all. Using an isometric view, players can see a wide range of the area Hundred Knight travels in. The music and sound effects are fitting and the voice casting is fairly well done – the sounds of swords slashing and hammers thumping is believable, and the voices reflect the cuteness of Hundred Knight and the sassiness of Chelka. For those who want to play the JRPG in Japanese, there is the option to switch to the Japanese dub while the story and subtitles remain in English.

“…despite the improved mechanics, sound effects, and a story with great potential, the game itself is not very exciting.”

Unfortunately, despite the improved mechanics, sound effects, and a story with great potential, the game itself is not very exciting. You fight the same creatures over and over again, and boss fights are nothing more than enemies that take a longer time to defeat. The villains you get to talk to are often just evil for no particular reason, and they are quickly introduced and defeated. In that sense, The Witch and the Hundred Knight 2 is not very engaging and would seem like a game made for children being first introduced to JRPGs. However, with coarse language and uncomfortable references to sex and virginity, this is definitely a game made for adults. To be honest, I’m not even sure if nuances of loneliness and rape are appropriate for young teenagers either, but that is a conversation for another time.

All in all, I believe there was a potential for The Witch and the Hundred Knight 2, but the opportunity was not taken and the story was not established well enough for the gameplay it offered. This was not difficult to learn, but there was nothing motivating me to actually want to complete it (besides writing a review, of course). Despite the friendly gameplay and interesting tactics, The Witch and the Hundred Knight 2 falls short in developing its characters and presenting a satisfactory storyline, thus leading to a somewhat dull experience.