As a newcomer to the Ys franchise, I had no idea about what to expect from Ys Origin, especially 12 years after it’s original release in Japan for the PC. Thankfully, Ys Origin is a prequel to the other four games, and as such, previous knowledge of the series is not needed to play. So does Ys Origin keep its relevance and stand the test of time after more than a decade or does it simply fade into the background of the action RPG genre?

As the title Ys Origin suggests, this is the origin story for the franchise, taking place some 700 years prior to the rest of the events in the franchise. While peace and prosperity reigned supreme in the world of Ys for years, demons came in flocks, forcing the twin Goddesses, Reah and Feena who once ruled the land to bring their people away from Earth’s surface, and into the safety of the sky. Unfortunately, the demons built a huge tower, persistent in their pursuit to conquer the Goddesses, where a second battle occurred, wreaking havoc on everyone involved.

After choosing either Hugo Fact, a mage capable of ranged magic attacks, or Yunica Tovah, a descendant of one of the famous six priests of the Ys capable of melee ax attacks, you will begin your journey to help find the Goddesses. As you might imagine, this isn’t exactly an easy pursuit, as you quickly find out that the twin Goddesses have disappeared from the safety of the sky, making their way to the top of the demon tower. Ys Origin is narrative based, never relinquishing the main goal to find the twin Goddesses, making the story feel not only pertinent but also relevant. This is definitely refreshing in a genre where many titles lose their way amongst all the fighting.

“Overall Ys Origin is a well-balanced action RPG that brings back all those nostalgic feels, and while it isn’t perfect by any stretch of the word, it’s both satisfying and fun to play.”

Interestingly, while I tend to heavily favor the flexibility and range of a mage, and therefore should have enjoyed playing as Hugo, Yurica brings an element of ease to Ys Origin that isn’t readily available with Hugo. This is due to a lack of fluidity where his spell-casting is concerned. Though you may have an advantage with ranged attacks, Hugo can only cast spells in the direction he’s facing, often times making it difficult to maneuver the numerous enemies at any given time. Despite Yurica’s lack of ranged or magical abilities, it is much easier to move around whilst attacking the surrounding enemies. Believe me, quick movement is a lifesaver in this game…literally. And if you’re wondering where the third playable character comes into the mix, you’ll be able to unlock them once you’ve completed the story.

Luckily, the controls aren’t too complicated, despite the short tutorial given at the beginning of the game. With simple jump, attack and ability controls, it doesn’t take long before you feel like a pro at combat. And while the story becomes more difficult the more you progress, as you kill enemies you’ll gain experience, leveling up your character just as quickly, even unlocking new abilities along the way. Despite the difficulty of the game, or the mage attacks, combat is a definite highlight within Ys Origin, bringing the nostalgic feel of the game full circle. Feeling like a combination of the classic Zelda titles for the SNES, and the new age Final Fantasy titles, this classic hack and slash combat just feels so right. Of course, the boss battles dispersed throughout Ys Origin also add to the title, as they’re as frustrating as they are engaging and fun. And after all, isn’t that exactly what makes epic boss battles so great?

Unfortunately, while the combat and boss battles are the best parts of Ys Origin, the gameplay does get repetitive quite quickly. Though there is quite the variety of contextual designs and different elements, throughout the story, a lot of the rooms feel the exact same. Despite knowing that you’re making the journey up and around the demon tower, which suggests a familiarity the further you go, the similarity of the rooms just doesn’t translate all that well while playing for longer periods of time. And if you wanted to try and finish the story in one go, which takes approximately 10 hours, there’s no doubt you’d get bored quickly. Well, if you manage to stay sane after trying to figure the game out by yourself that is. 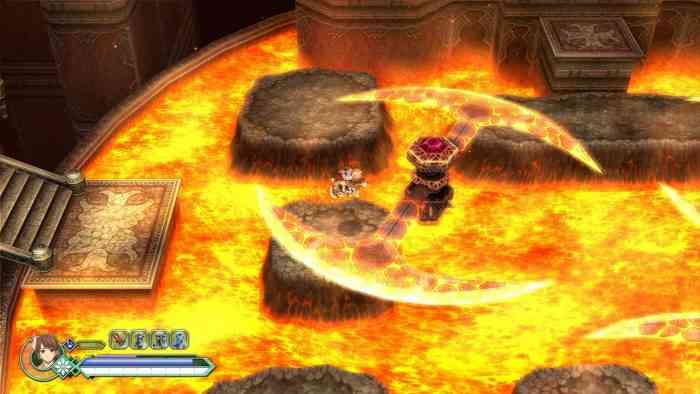 Although I’d prefer not to be hand-held throughout the entirety of the story, Ys Origin gives you zero instruction, unmercifully hanging you out to dry if you can’t remember which way you came from, or if you don’t know where to go next. There is no map available in the corner of your screen, nor is there one provided to pull up on the start screen. As you might imagine, being in a bunch of rooms that look similar to the last, it’s no walk in the park to keep moving forward. Despite the fast pace of the combat, the journey between rooms is anything but. And in addition to this, you’ll have to complete a few puzzles along the way, mainly consisting of finding keys to unlock doors you’ve previously passed. Believe me, you will likely become frustrated quite often. I will, however, save you some of the frustration right now, because if you click on the Goddess statues throughout the map you will not only be able to save your progress, but you’ll be able to strengthen your character as well.

“Feeling like a combination of the classic Zelda titles for the SNES, and the new age Final Fantasy titles, this classic hack and slash combat just feels so right.”

So how does Ys Origin look after all these years? Let’s just say that this is definitely the definition of a successful remaster. With 60 FPS, and beautifully animated cutscenes, if it wasn’t for the nostalgic feel of the 2D graphics, there’s no way you’d be able to tell this was a game born in 2006. With a variety of environmental textures and a funky little art style, there isn’t much to complain about where the graphics are concerned. In addition to this, Ys Origin runs smoothly the entire time, without so much as a single frame drop. And of course, what’s not to like about a soundtrack that pulls you into the combat time and time again? From upbeat tempos for boss battles and more gentle tones for the longer, drawn out dungeon exploring, the sounds match the action perfectly at every turn.

Overall Ys Origin is a well-balanced action RPG that brings back all those nostalgic feels, and while it isn’t perfect by any stretch of the word, it’s both satisfying and fun to play. With awesome boss battles, engaging combat and a story that stays true to itself throughout its entirety, this distant prequel is an example that old-age games can still remain enjoyable years after their original release. 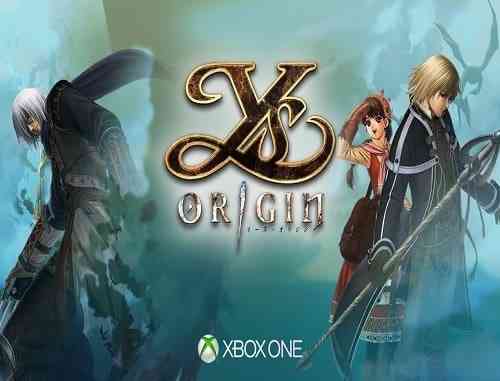 We Need More RPGs Set in Space
Next God of War Review – Kratos is Back: Bigger, Better, Badder
Previous The Witch and the Hundred Knight 2 Review – Colorful but Dull