As a fan of suspenseful survival horror games where light is your best friend, I truly wanted to enjoy White Night. Sadly, I didn’t, or at least not as much as I had hoped. Tiny French developer OSome Studio gets full marks for effort though, as White Night’s black and white art style (reminiscent of Frank Miller’s Sin City) is captivating. The film noir storytelling sets the right mood and there is no question the narrative is strong. The foundation is certainly there for a successful downloadable game but in the end White Night misses the mark and I don’t see it resonating with gamers like Activision and OSome would have hoped. Camera issues, slow pacing, unfair enemies and lacklustre gameplay hold White Night back where the end result is more of a frustrating snoozefest than an edge of your seat old school survival horror.

In film noir style White Night is set in the 1930s. After a near fatal drinking and driving accident where our hero almost hits a ghostly woman on the street, he awakens badly wounded and in need of medical attention. Soon after, he manages to stumble upon a nearby mansion where his goal is to find a phone and get some help. Soon after his arrival, he figures out things don’t appear quite as they seem. What started out as a search for help turns into a quest to uncover the secrets behind this ghostly mansion. Armed with only a box of matches our hero’s journey begins.

The noir style storytelling is remarkable strong. The narrative delivers a captivating storyline and the clues found throughout the mansion only add layers of depth to the game’s plotline. It is a dark story that only gets darker and grizzlier with every door that creaks open. There is no question OSome nailed this aspect of the game. In some ways the storytelling allows you to overlook some of the game’s shortcomings.

White Night is played in the third person and is a game rich in exploration and puzzle solving. Unlike some other modern day survival horrors loaded with gunfire and monsters, White Night goes back to some of those survival horror roots. You won’t find any AK-47’s or blood thirsty zombies in this one. Instead, you are cascaded from one room to another searching every nook and cranny for clues and a light source which guides you to the next room. Along the way you will need to avoid ghosts while finding items that assist you with some of the problem solving sequences. Like all puzzle solving games, there are frustrating elements and White Night has more than a few.

The first major hurdle I encountered was the fixed camera issues. Some may enjoy the use of old school fixed cameras but I found they zapped the enjoyment out of the game. It was extremely disorienting as they often quickly switch angles and that made it difficult to gauge depth. Simply determining exactly where I was was a chore and with every switch it took some time to get my bearings straight. I understand this adds to the intensity of the game but c’mon, the camera issues turn this mansion into a confusing labyrinth. Just to get back to the kitchen that is loaded with matches is troublesome and felt like a game of pin the donkey. I would often wonder which door I came through or which direction I was headed. It was confusing and unnecessary. 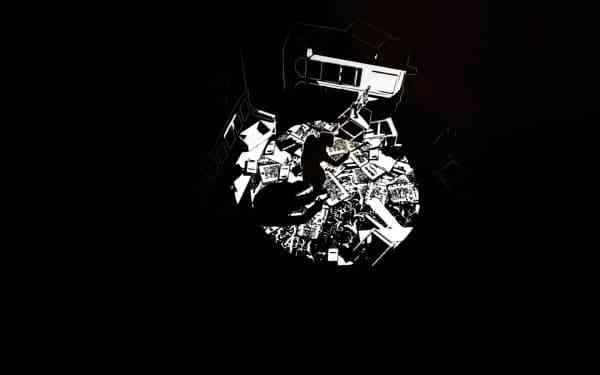 I’m all in when it comes to story driven games but despite its 4-hour length the pacing of the game felt slow. Much of the pacing has to do with some of the difficulty levels of the puzzles themselves. Many are simple to figure but others are more problematic. If you run out of matches things go from bad to worse, quickly. Despite wearing a gigantic trench coat our hero apparently only has room for 12 matches… yet if you pay attention to every little clue eventually you figure it out some of the more brain busting sequences.

Those ghostly figures you encounter in the game are completely unforgiving. If you are caught in the dark or run into an area a little too quickly you will be killed instantly. Hopefully you have saved your game frequently because if you haven’t the game launches you back to your previously saved game. I learned this harsh lesson early in. If you do manage to save your game, frequently running into these unfair enemies isn’t too much of a setback as you progress towards an ending that is surprisingly pretty good.

As far as the sound and visuals are concerned White Night is strong. The music suits the style of the game and only serves to add to some of the tension when a ghost is lurking in the room or behind a closed door. Likewise I enjoyed the artistic, stylized look of White Night. It was certainly one of the more original looking survival horror games of the past decade.

White Night isn’t the most riveting survival horror game I have played in recent memory but it isn’t the worst either. If not for the unique film noir storytelling combined with a stylized black and white look, White Night could have been one of the more forgettable survival horror games of 2015. Unfair enemies and camera issues dampens an experience which otherwise should have been much better than the sum of its parts.