We Are Doomed Review – We Are Impressed

You are a fuzzy eyeball flying around in space. You move with the Left stick, swimming like some sort of amoeba-alien. Strange things appear, flying straight towards you – are they aliens? Smart missiles? Possessed guppies? All you know is, they want to catch you. They want to hurt you. They are oddly beautiful but they are deadly, you know that instinctively. You must not let them get you. You must survive. There is no time for tutorials or practice stages – We Are Doomed throws you right into the thick of it without wasting any time.

Luckily, you have been given a weapon with which to defend yourself. It is a large flame that you control with the Right stick. When you touch your enemies with it, they are vaporized instantly. You are tempted to plow right into their ranks, and wipe them all out at once. But you have to be careful, as they can easily surround you. You have to maintain a safe distance, and move around, and kill the creatures when you get the chance.

The environment in We Are Doomed is filled with beauty and danger. Colors pulsate all around you, light explodes, blinding you at times with its dazzling savagery. You sometimes even lose sight of your enemies in all the visual noise, causing you to die by accident often, especially at first. More things come out of the void – flying boulders, creatures that shoot back at you, even long, centipede-like things made of diamonds. The action gets amped-up as you wipe out wave after wave of enemies, and pretty quickly, you are frantically racing to stay alive in what seems like an impossible situation. 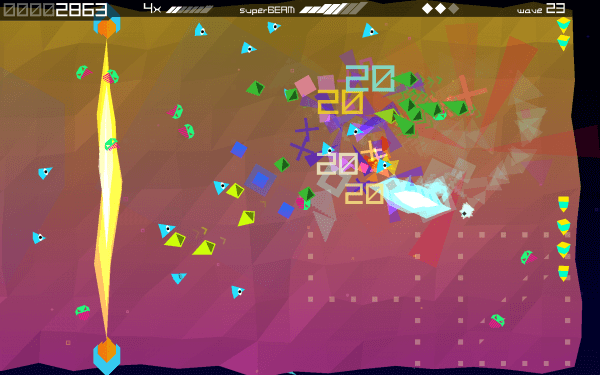 But after a while, a cool thing happens in We Are Doomed – you settle in, relax, and start to understand the language of this game. You work not so much in opposition to the other creatures, but in sync with them, mimicking their rhythms in a weird kind of symbiosis rather than struggle. It is at this time that you start to really hear the music for the first time; chill and entrancing, it seems to compliment the action going on perfectly. Your heart rate slows, you start to appreciate the mellow vibe hiding underneath this game’s hyperactive facade. Whereas at first, you kept your eye focused entirely on your own character in the center, you now find yourself looking at the entire screen, becoming aware of everything around you. You start to anticipate the enemy’s movements, and instinctively react to them.

It is here that We Are Doomed starts to really work. Once you become part of its strange ecosystem instead of fighting against it, you fall into a zone. You revel in the thrill of the deadly dance, and wiping out swaths of enemies, while satisfying, becomes secondary to timing and executing your movements around the screen. Never was mass extermination so Zen.

We Are Doomed is pure arcade eye-candy. Vector graphics and crude polygonal shapes burst with saturated color – this is Asteroids on Crystal Meth. Enemies explode and backgrounds shimmer in a non-stop, seizure inducing display that becomes strangely addicting. In gameplay, We Are Doomed is challenging but fair. You restart from the beginning when you die, which is often at first. While initially frustrating, this hurdle is eventually surmounted with patience and learned skill. Get past Wave 10, and the game rewards you with the ability to restart from there. Your confidence grows, slowly but surely, and you really start to have fun playing We Are Doomed. The developer of this game, Vertex Pop, deserves much credit for creating a perfectly paced and balanced gaming experience, that demands your total focus and respect, but rewards your efforts as well. 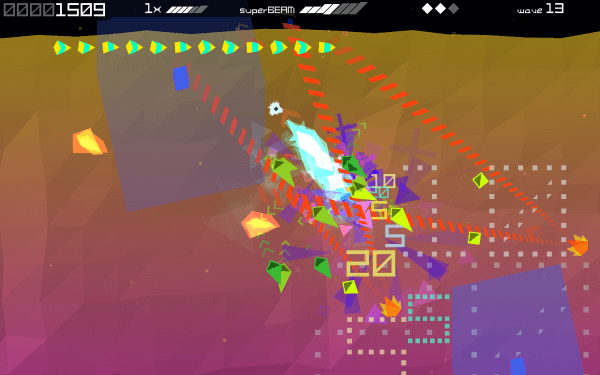 You will find that We Are Doomed has its limitations, like any game this small would. There could be more for you to do in each wave besides just snuff out enemies. More power-ups might have been nice, to give you extra shields, or to freeze all the bad guys, or give you extra health – there are lots of things that could be added to make the experience a little bit deeper (to be fair, there is a Super Powered version of your flame weapon, but that is all). The game’s greatest strengths, its flashy visual style and chaotic action, are also possibly a limitation, as the sheer intensity of the experience makes We Are Doomed a game that is only possible to appreciate in discreet doses – there is only so long your eyes can go without blinking.

But overall, with this game, you will experience a rare feeling as a gamer: playing for pure, distilled fun, for the experience alone. In fact, Vertex Pop seems to have anticipated this, and included a free-form “Endless” mode, in which you can indulge in the atmospheric fun without even thinking about level progression. A transcendent fusion of color, music and movement, We Are Doomed is as close as you will get to poetry in a twin-stick shooter. The more you play it, the less you will care how far you get; you will come back again and again just for the simple pleasure of playing it. But be careful – that 30 minutes you think you have spent will likely turn out to be more like 2 hours when you check the clock.