The crowd funded Dead Synchronicity: Tomorrow Comes Today promised an old school style point-and-click adventure that was going to be darker than what you’re accustomed to. I had a turn with the Alpha and while I wasn’t blown away, the game had a lot of promise. Now after having spent some time with the feature length game, the game does deliver on what it promises, it just happens to have massive hurdles that hold it back from being as good as it could have been.

In DS, you play as Michael, a man who awakens in to a world that he doesn’t recognize and being completely devoid of any and all memories. While I was initially skeptical of yet ANOTHER game with an amnesiac lead character in a post-apocalyptic scenario, as the story unfolded, it actually worked really well for the game. The world Michael awakens to has been devastated by a cataclysmic event colloquially referred to as ‘The Great Wave’ which has left the world broken and society in shambles. You open your eyes to a refugee camp that is walled off by a brutal and merciless army. The man who has taken care of you while  you were in a coma has a very ill son. The boy is a ‘dissolved’, a disease that leaves its victims in a trance until they begin to break down at a very basic level until they quite literally dissolve. 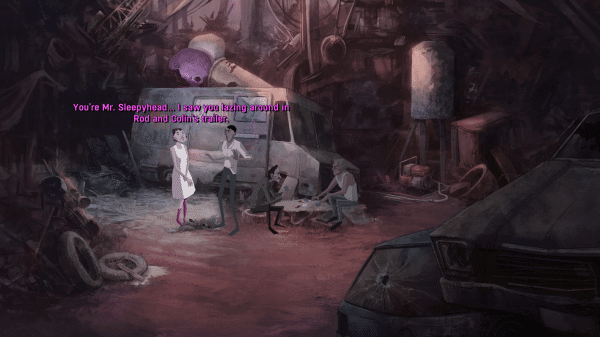 “While I was initially skeptical of yet ANOTHER game with an amnesiac lead character in a post-apocalyptic scenario, as the story unfolded, it actually worked really well.”

What really helps this game along is the mystery style unravelling of the plot. The visions you are stricken with continue to reveal strange things and the farther you go down the rabbit hole, the stranger it becomes. The gameplay is a typical point/click game as you have to acquire items to help people to gain other items that will progress the game. You mill about 2D areas and click on various ‘hot spots’ to acquire items, unlock things, so on and so forth. Some of this is extremely simple, but some of it is so beyond complicated that it becomes a huge, huge hindrance to the game. With a story like this and the type of game it is, the puzzles that progress the story should be challenging to keep you engaged but ultimately should be finished in a timely manner to keep you interested in the story. What happens far too often in DS is that a puzzle is just annoyingly difficult and there is no indication as to how to solve it. At one point, you need a light to enter a sewer area and luckily, in the trailer you awoke in is a lantern. Except you can’t take the lantern because it would plunge the above ground trailer into ‘darkness’. What resulted was me clicking every item I had onto every spot and character in the game until I could find something that resulted in more puzzles that had no indication they even existed. This would happen at least once a chapter which really breaks up the flow of the game and made it really hard for me to care about what was happening when I finally did make it to the next chapter.

What really works for the game is the art, the atmosphere and, weirdly, the music. The art style is definitely a unique stand out in the genre, looking more like an old Heavy Metal comic than anything from today. This works really well for the game and plays directly into the dark and violent tone that has you doing morally questionable things and dealing, quite frankly, disturbing subject material. Like paying off violent pimps so you talk to a woman forced into prostitution with the mental development of a child. Or breaking into a closed off park where literally hundreds of people hung themselves. You know, the chipper, upbeat stuff you usually do in games! What also helps build the atmosphere of the game is the music which is slightly weird because if you heard it out of context, the music borders on comical. It’s so very 80’s you almost feel like someone is trying to be so over the top with their version for a laugh. However, with the art style harkening back to things like Heavy Metal, it fits in really well with what plays out on screen. It’s always dark and subtly shifts tone depending on what you’re encountering in the game. This all adds up to probably the best part of the game. 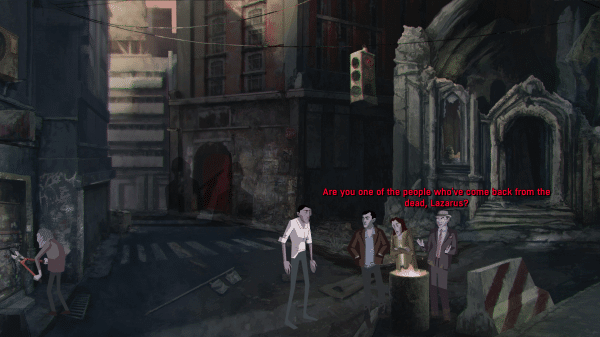 “The art style is definitely a unique stand out in the genre, looking more like an old Heavy Metal comic than anything from today.”

One other thing that is really off putting about the game isn’t really DS‘s fault. The game is European and what I’ve often found is that games from that continent tend to try to appeal to their American audiences by creating characters that are American… or at least what they think Americans are like. This almost without fail ends up in ridiculous dialogue that is out of place, awkward and elicits more laughs than drama. Like frequently using the word ‘dude’ but never in its proper context. I would prefer if studios based in other parts of the world simply made characters that they would make for local audiences and stop trying to appeal to foreign audiences. Whenever American studios do it, it always ends up either racist or laughably bad, so I don’t know why foreign studios insist on making the same mistakes.

Overall, Dead Synchronicity: Tomorrow Comes Today uses a great art style, creates great atmosphere and has complimentary music to create a dark and stylish game to liven up its point-and-click gameplay. However, the flow of the story is regularly broken up by puzzles that are equal parts confusing and seemingly without order that end up with the player spending far too much time trying to advance the story. As far as living up to its Kickstarter promises, DS does an admirable job bring that to life. However, the substantial hurdles that hold it back make it a less than pleasant playing experience.