There are a lot of Warhammer 40,000 games, and if you’re a fan of turn-based tactics games, there’s a pretty good chance you’ve probably played one or two. This week, I got to take a gander at the recently released Warhammer 40,000: Mechanicus to see how the series’ newest entry handles its contribution to the story of the 41st century. Well, the results are in, and they are… okay.

I should clarify. Mechanicus’ use of the futuristic science-fantasy setting is fine. The game is a bit unrelenting in its grit, and it suffers a bit from unimaginative aesthetic design. There’s little here a fan of science fantasy (especially dystopian) won’t have seen before. The heroes of our story are your standard transhumanist cultists, all of whom have at least one mechanical eye and fight for lives they seem to hate living. The villains are ancient sentient alien machines who mostly seem uppity because they don’t own the entire galaxy. Aesthetically, there isn’t much to discuss. Well, maybe one thing. The game loves its SAT words. Seriously, if you’re not a world champion of deciphering word meanings from context clues, you might want to keep a dictionary with you while you play.

The gameplay of this Warhammer 40,000 game does offer something new, however. Most notably, the game’s new cognition mechanic is an interesting concept. Your best units are known as tech-priests, who use science magic to accomplish their goals, whether those goals be massacring evil alien robots, healing allies, or what have you. Essentially serving as mana, cognition points allow the priests to take actions such as traveling further distances within a single turn, using certain weapons, or using other powers. Cognition points can be gained through a variety of means, such as analyzing enemies, watching a grunt get attacked, or by standing next to glowing green pillars and blocks. Trying to find the best way to use your cognition points to really stretch the possibilities of what you can achieve in a single turn is fun, easily the most fun part of the game. The leveling system for the tech-priests is also nice. It allows you to upgrade your priests however you’d like using the in-game currency. 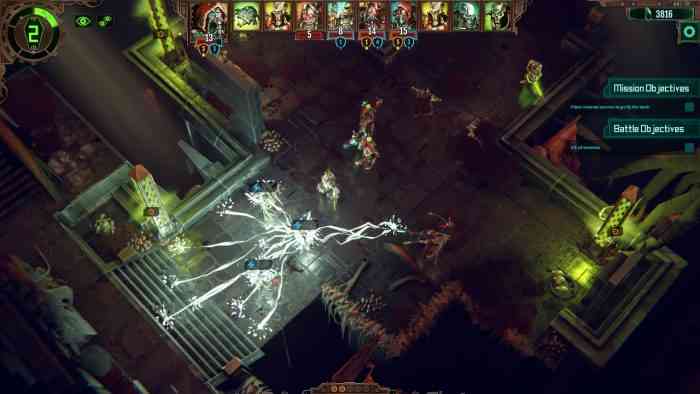 The upgrades are a bit poorly balanced, but more on that later. An issue arises with how necessary cognition points are even for basic play. The feeling of not being able to make a melee attack because you simply couldn’t gain a cognition point this turn is infuriating. The points are precious, but there being a necessity is also a major source of frustration at times. This ultimately leads to a feeling that the early game is only early for the tech-priests. Early on, the player’s very best units can be killed by the measliest enemy grunts almost as easily as the priests can kill them. Then, the stronger enemies that the priests might face (even on missions that the game calls ‘easy’) can have double the HP, do double the damage, and sometimes even make double the number of attacks. I understand that games like this require careful consideration and planning, but when the levels don’t really offer places to take cover, and your priests have to be huddled by glowing green columns in order to use even their most basic abilities, then the fault is on the game for punishing the player.

All of that having been said, upgrades can be used to make the game easy—too easy, even. This is another problem. The very early game is punishing, but if you choose the right upgrades while levels are cheap, the game quickly becomes a laughable cakewalk. The cakewalk is aesthetically very nice at times, as some of the upgrades involve powers that are really cool to look at, but it’s still a cakewalk, and that’s not rewarding. The variety of powers also can help to keep things from feeling overly repetitive (after all, who isn’t excited to test out a new ability?), but only to an extent. I did find myself sitting back in my chair and thinking, “Man, I’m tired of fighting alien death-robots.” That’s not a feeling you ever want to experience.

Outside of the game’s bread and butter, combat, the player spends time navigating ancient tombs as the enemy readies themselves for an attack. Each move you make in the tombs will allow the enemy to ready their defenses more effectively. This causes issues, though, as it actively discourages players from exploring these tombs more fully, as the turns taken to explore allow the enemy to strengthen themselves, and the areas explored often involve choices that may very easily result in unexpected consequences that strengthen the enemy even further. The optimal way to play is simply to blaze through the tomb, avoiding any unnecessary detours.

Overall, Warhammer 40,000: Mechanicus isn’t a bad game. It certainly has its issues, especially in the balancing department, but aside from that, the issues don’t tend to seriously hurt what you’ll be looking for if you’re considering playing this game. The game isn’t ground-breaking, but it’s not a step backwards either.