You’ve probably seen videos of geese terrorizing children, the elderly, dogs, or basically anything that happened to piss them off for no apparent reason. They are known for their fearlessness, relentless nature, long necks, and terrifying honks. In our internet age, the goose has become the jerk of the animal kingdom. But what would you say if I told you that you could experience what it’s like to be that beast? To become the menace of a peaceful English village, sabotage relationships between neighbors, bully children, and ruin the days of hard-working people? If your answer is, Yes, I love being the bad guy, then the Untitled Goose Game is a perfect game for you.

Published by Panic and developed by House House, an independent studio of four people out of Australia, this game is definitely something else. As a goose, you are given a list of tasks (or more like evil deeds) that you need to solve, from stealing items to trapping people in garages. These tasks require the player to use their devious creativity to approach them in different ways like figuring out and manipulating the patterns of humans, following contextual clues, and some stealth.

The best part about the puzzles is the carefully engineered events the developers have in place to see the hilarious results of your actions. Many times these actions can trigger a chain of unexpected events to occur,which may provide you with whole new areas to explore and other ways to torment people. For the most part, the puzzles are surprisingly intuitive, and I was only baffled at one solution at the start of the game, which did teach me a valuable lesson. If you are stuck on anything in the game, just start causing havoc, interact with everything you can and see what happens.

Unfortunately, the only thing I felt was missing from the puzzles is the lack of feeling clever after figuring them out. I was actually more often thinking the other way around, about how clever the devs were for setting up these events. I think this might come due to the fact that the puzzles are pretty simple, leaving me without much sense of accomplishment. However, that is a very small complaint in an otherwise fantastic game. The Untitled Goose Game isn’t trying to be a deep puzzle game, it’s meant to be a comedic and stylized display of what might really be going on in the minds of these creatures. And although the game length is pretty short, about five-six hours to do everything at a casual pace, it is packed with content. 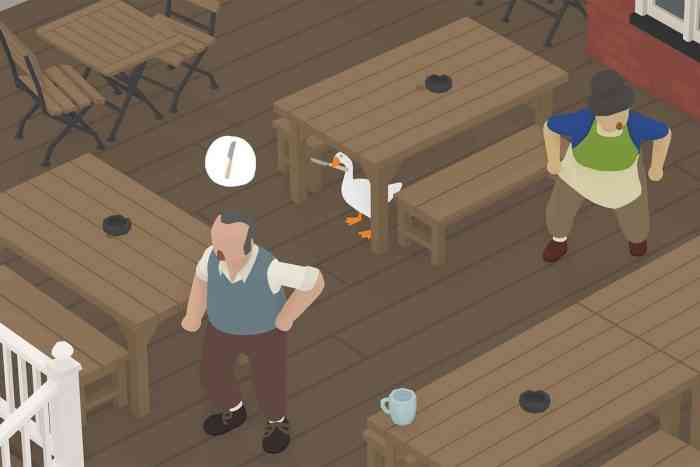 I have a love for minimalism and this game shows you that everything can still be clear, beautiful, and expressive without all the frills of next-gen graphics. The artist and animator of the Goose Game really put in the effort to bring this village to life. I was honestly having fun just running around, bobbing my head up and down in celebration, taunting the people even though I knew it didn’t do anything, just because it was funny to look at.

The sound design also follows the minimalistic route too, but it is equally as excellent in providing extra satisfaction and realism to what’s happening around you. It’s the little things you notice and I really found the pitter-patter of the goose’s footsteps pleasing to listen to, and the honks delightful, no matter how often I spammed it. Although most of the game goes without music, a fitting piano melody is played at times to provide emphasis to the situation at hand. The Untitled Goose Game is perfect for those who play games for creative, artsy experiences. I also think if you are looking for something to play with your significant other or children, this would be a hilarious experience for everyone involved. 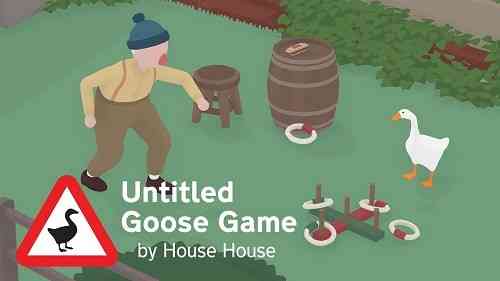