I can’t remember the last time I was as torn about a game as I am about Long Journey Home. The story, the characters, the look of it, the sound, the music, all add up to a game that’s unlike any other. But in the mundane moments of regular gameplay, you start to notice the cracks, and before long those cracks have turned into a breaking point. Then the game becomes impossible. Or, if not impossible, just not very fun. But then it’s also so beautiful and compelling. Let’s try to solve the riddle that is The Long Journey Home.

I’ve seen genre descriptors attached to Long Journey Home that are sort of correct but forget about those. It isn’t really a roguelike, or a management game, or a space combat game, not in any way you’re used to. Long Journey Home is about a space mission gone wrong. A group of four astronauts tests an experimental jump drive, but instead of jumping to nearby Alpha Centauri, they jump themselves to the far end of the galaxy. Thus begins the titular The Long Journey Home, as they attempt to slowly make their way back to Earth. A classic sci-fi story! That’s the premise of Lost in Space, and also Star Trek Voyager, and in a way, it’s also Farscape. Because the far side of the universe is filled with weird aliens to discover, and talk to, trade with, race, or fight. I love all of this. I love putting together the crew of well-written astronauts, all of whom play off of each other in different combinations. I love the conversation system, which feels like it belongs in a classic old school text-based game, or a clunky MMORPG. It’s surprising and charming.

Then there’s the piloting. You’ve got two ships: your main vessel, and a landing craft. Your big ship is piloted in two dimensions by calculating thrust and momentum, while also taking gravity into account. And the way this is portrayed is brilliant, a tight grid that dips and curves next to stellar bodies, just like a real chart of gravity would. The lander is also piloted in 2D, from a side-on perspective. It’s like one of those old moon lander games. You need to take into account gravity, atmosphere, and wind. The information is a little overwhelming, but in a good way. As you figure out how to read it, you’ll feel like a genuine rocket science genius. Remember those cracks I mentioned? Navigation is one of those places where they start to show. You need materials to operate your ships, and you get materials through a simple procedure. You’ve got to get into orbit around a likely planet, send down your lander, mine for resources, and carry them back up. This is the core gameplay loop!, which needs to be strong. While The Long Journey Home it has its appeal, the margin of error is so small that the game feel punishing in the extreme. 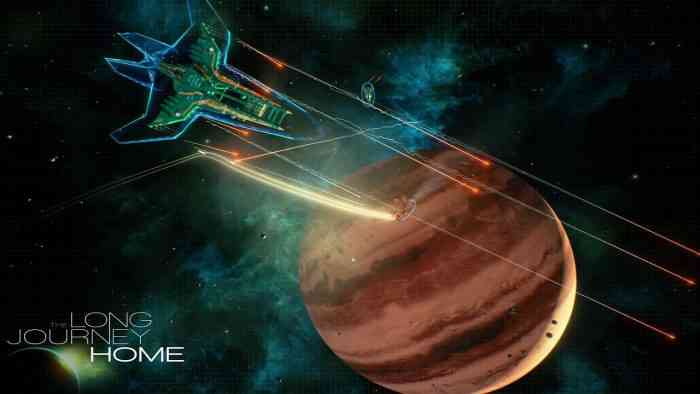 Sometimes the way you figure out the optimal speed and angle for your lander is a matter of trial and error. But if you don’t bring it down perfectly, you’ll end up damaging the hull, which needs metal to be repaired. So you collect the metal and bring everything back up. You damaged your hull about 38%. All that metal your brought back? It’ll repair less than 10% damage. The numbers just don’t add up.Same goes for calculating orbital trajectories. You try to slingshot your ship around a star to get close enough to a planet that it will slow you down and allow you to lock in an orbit around a moon. But if you miscalculate even a bit, maybe you built up too much acceleration, you’ll be burning fuel to slow, to turn, and to speed back up. I found myself overshooting planets 3 or 4 times, burning off tons of fuel, which my lander could only refill in paltry increments.

Sure, NASA scientists don’t get to launch rockets by trial and error. If they shoot too hard towards the moon, they’ll lose billions of dollars of equipment. But that’s why they have teams of experts calculating and peers reviewing each others’ work. That’s why rockets aren’t piloted with a Nintendo Switch. And while The Long Journey Home is crunchier than most space games you might find, it’s not a simulation. There are plant alien people, and beauty contests, cosmic mysteries to solve, and battles to fight. It’s supposed to be something of a fun adventure. But as it stands, it’s mostly an exercise in frustration. I don’t know what it would take to get me to return to The Long Journey Home. I very much want to. I love the animations of the ship landing in an alien structure, and the dialogue between the astronauts as you drift through space. The music creates a lovely atmosphere. The quests are mysterious and intriguing. But the core gameplay just isn’t there, and that discourages me from coming back. The Long Journey Home is bound to drift to the far left side of my Switch home screen, but I hope it’s not forever. I will keep my eyes peeled for an announcement promising “drastic changes.” In the meantime, I will dream of a better game.

***Switch code was provided by the publisher for review*** 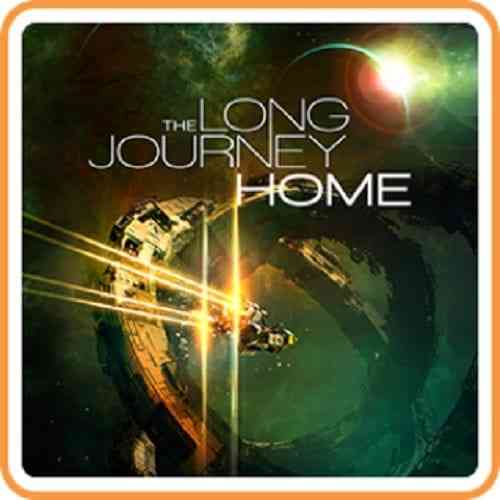