Here we are, Uncharted 4: A Thief’s End. It’s been almost a decade since Naughty Dog first presented the world with Nathan Drake, the illustrious treasure hunter that was part Lara Croft, part Nathan Fillion and mostly Indiana Jones. I still remember the hype that surrounded the launch of the game and the ‘wtf’ moment when the monsters burst forth and try to claim you while you navigated an old Nazi base. I had one friend in particular who voiced displeasure, stating that the game looked good but wasn’t all that fun, something I heard a few people say. I, on the other hand, being a huge Indiana Jones fan in my youth, was smitten with Uncharted and played it through copious times and as the subsequent sequels came out, the realization that we had something special here became more apparent.

Now, nine years later, Uncharted 4: A Thief’s End brings us the last and final piece to the story of Nathan Drake. There have been some shake ups behind the scenes which has lead to some delays and gameplay changes, but Drake is still, as always, Drake. In A Thief’s End, we are not only treated to an absolute wonder to play but we’re given a satisfying and emotionally resonant conclusion to what is, without a doubt, one of the greatest game franchises of all time.

A Thief’s End starts with a familiar opening scene to those Uncharted fans out there. It’s a big chase scene at sea that leads us to ask how the hell Drake got himself into this one before we cut back to a few weeks prior and find out just how. But it’s not just a few weeks we cut back to this time. No, A Thief’s End knew it was going to be the final game, and takes us back through Drake’s life and we discover the treasure that Nathan has been hunting since his youth – the lost treasure of famed pirate Henry Avery.

“…we’re given a satisfying and emotionally resonant conclusion to what is, without a doubt, one of the greatest game franchises of all time.”

We’re also introduced to Nate’s long lost brother Sam, the only person more obsessed with finding Avery’s treasure than Nate. In the hunt for clues to Avery’s treasure all those years ago with fellow treasure hunter Rafe, a spoiled rich kid looking for fame, Sam is unfortunately killed as they try to break out of a prison. Which probably explains why we haven’t seen him before.

When we get to the present, we find Drake, legendary adventurer, working for a marine salvage company. Having settled down with Elana and gone legitimate, he’s barely the Drake that we know and love. It’s with great zeal that Sam finds his way back into Nate’s life, having been hidden away in the prison for all these years only to be busted out by a drug lord who now wants Sam to pay him for the rescue. Sam needs Nate’s help to finally find Avery’s treasure to not only save his life from this threatening kingpin, but for the brother’s to finally fulfill their families legacy. Unfortunately for the brothers, Rafe and his mercenary army are also hot on the trail. No one ever said treasure hunting was easy. 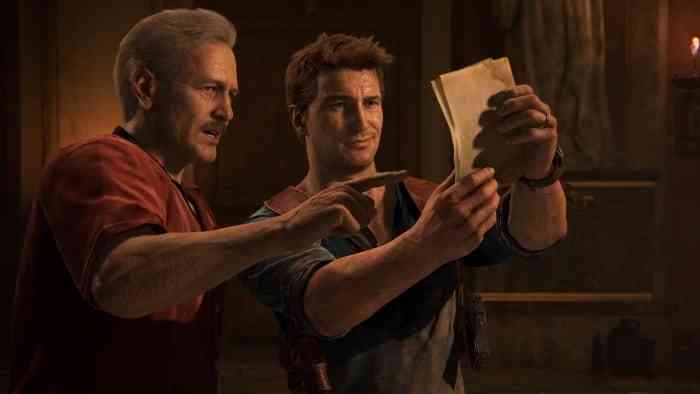 As the game plays out, we are treated to everything you might expect from an Uncharted game – platforming, puzzle solving, firefights and some stunning set pieces that will blow you away. They’ve also brought a load of emotions to the table too, packing a serious one-two to the heart and really drawing out the attachments you’ve made to the characters over the years. There’s one section of the game that is probably one of the most intense 20 minutes that I may have ever played. When it finished, I was happy for the cut scene because I needed to catch my breath. I became less happy for that cut scene because while catching my breath, I was pushed to the brink of tears as they sucker punched me with an emotional low after such an adrenaline fuelled high.

“Druckmann and Straley deliver the goods with gameplay, suck you in and then deliver a straight right that snaps your head back and makes you realize that these characters actually have something at stake.”

That’s where the dynamic duo of Neil Druckmann and Bruce Straley shine the brightest. They deliver the goods with gameplay, suck you in and then deliver a straight right that snaps your head back and makes you realize that these characters actually have something at stake. It’s not just all shooting and jumping and car chases; these characters are fully realized, have tremendous depth and our attachments to them from previous entries make us care all the more.

The shakeup that saw Amy Hennig leave and saw Druckmann and Straley take over after the wild success of The Last of Us was a bit worrisome for some as it showed a dramatic shift at Naughty Dog. What happened behind the scenes I can’t attest to, but the change in the game is quite noticeable but in no way does it detract from the game. 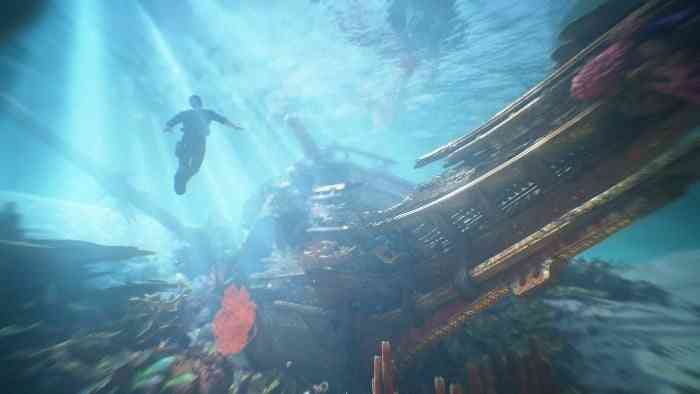 The things I remember most about Uncharted as a series is all of the running and gunning, the chase scenes and some puzzle solving and platforming. In Thief’s End, there is a shift more towards the puzzles and platforming. Using as much processing power as they could, they rendered a world where you need to get to a destination but there are plenty of ways to get there. So, this opened up the world to more explorations and a variety of ways to navigate the treacherous mountains or the perilous caves that you found yourself in. On the other hand, they decided to treat the combat much like how it was in The Last of Us. There is a high stress on sneaking as whittling down the numbers of the Shoreline mercs makes every combat scenario much easier. You can also choose to completely bypass your enemies, sneaking past entire areas if you can. I, of course, have a penchant for shooting silly NPC’s in the face when I can and since the soldiers are far less terrifying than the zombie/mutant/monsters from TLOU, I willingly engaged in firefights more frequently than I think they wanted me to.

I’m sure there’s going to be some that will dislike this shift quite a bit, but I thought it was a good change for the game we ended up getting. While every location got a big action scene, there are three or maybe four really big, explosive, thrilling, set pieces that are simply incredible. Like I said above, you welcome the cut scenes so you can catch your breath because of how thrilling and intense some of the set pieces are. The fact that more of the game is focused on solving puzzles and platforming and not necessarily focused on combat based action, really ramps up the intensity of these big, bold action pieces. Good things come to those who wait, or so they say. The other thing that I must make note of is that Uncharted 4 just may be the prettiest game I have ever played. First, the motion capture on it is out of this world. When even Drake’s eyes emote during particularly emotional scenes, you know that the mo-cap is on another level. Also, the locations are simply gorgeous at every turn. Since it plays out like a Bond film as you trot the globe, solve mysteries and tangle with bad guys every chance you get, it is fitting that Uncharted uses Scotland as one of its locations. It was almost like Sony realized the goldmine they were sitting on while filming Skyfall and they decided to incorporate all the B-roll footage from the shoot. Whether it’s the snow capped mountains of Scotland, the arid desert or the muggy cities of Madagascar, there isn’t even an instant that you won’t be in awe of how simply gorgeous this game looks.

“Goodbye, Nathan Drake. Thanks for the memories.”

When I played, I tried to bomb my way through for review purposes. I spent time exploring, certainly, but I did my best to get through the game as quickly as possible and it still took me 15 hours to play. This is easily the biggest, most expansive and ambitious Uncharted game yet. As I said above, even though you’ll end up in the same place, there are different ways to play the game which makes for intriguing possibilities. There is also a ton of stuff to pick up along the way, so if you do go digging through every crack and crevice in the game, there are lots of pickups to reward the intrepid explorer.

What it all comes down to is that Uncharted 4: A Thief’s End is a masterpiece and a fitting end to one of the best franchises that you will ever have the joy of playing. The game is fun, engaging, challenging and packs an emotional wallop when you were least expecting it. It’s lengthy as it follows our heroes as they hunt for legendary pirate treasure, but it also dives into Nathan Drake’s past, filling in any gaps that were left in our charming heroes back story. Not enough can be said about the skills possessed by Druckmann and Straley nor can enough be said about Amy Hennig and how she brought us one of the best protagonists we’ve ever had the pleasure of playing as. 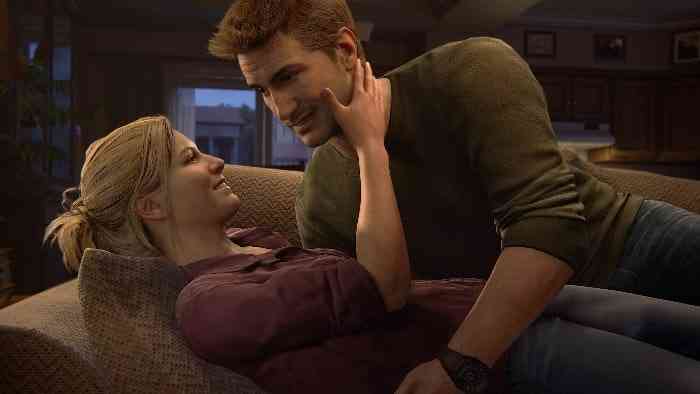 There are parts of this review that make it feel like a eulogy. We’re saying goodbye to a beloved hero and to a beloved series. When the credits finally began to roll for me, there was a sense of loss as thanks was rolled out to Amy Hennig in a very nice touch by the creative team. It was then that I realized this was it. This was the last time I would pick up a controller and get to see what crazy, globe hopping, lost city finding adventure Nathan Drake would charismatically lead me on. The conclusion to the series is fitting, harkening back to Naughty Dog’s early days while also giving us a suitable send off to the Drake’s. Fitting, but still an end.

Goodbye, Nathan Drake. Thanks for the memories. 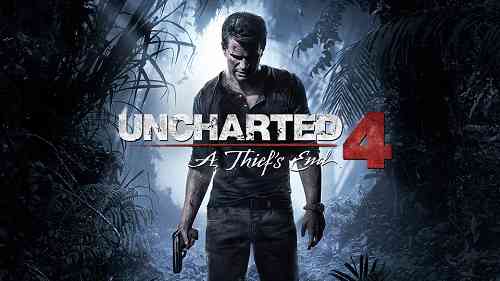 The Last of Us 2 Is Really About Being Human – And it Proves It
Next King’s Quest Chapter 3: Once Upon a Climb Review – This Season is Finally Finding its Foothold
Previous Valkyria Chronicles Remastered Review – JRPG Classic Gets a Minor Facelift