Unbox: Newbie’s Adventure is yet another attempt by developers to dive backward through time and capture that feeling we once had with platformers like Super Mario 64 and Banjo Kazooie. When I watched the previews for Unbox, it definitely looked like it could be a fun and fresh take on a beloved genre. So does Unbox have what it takes to provide gamers a fun, nostalgic platformer? Or is this a game that needs to be labeled “return to sender”?

You are Newbie, a literal box that was designed to deliver goods for a company called the Global Postal Service (GPS). You’re not the first one, in fact, you’re the latest version and the entire company is riding on your potential talent to save the company. Along the journey, you’ll be guided by other boxes, each with their own unique personality and looks. Shortly after you begin your adventure, you’ll come across the notorious Boss Wild, a box with a 60’s era greaser style, who leads the Wild Cards gang who are doing everything in their power to thwart GPS. 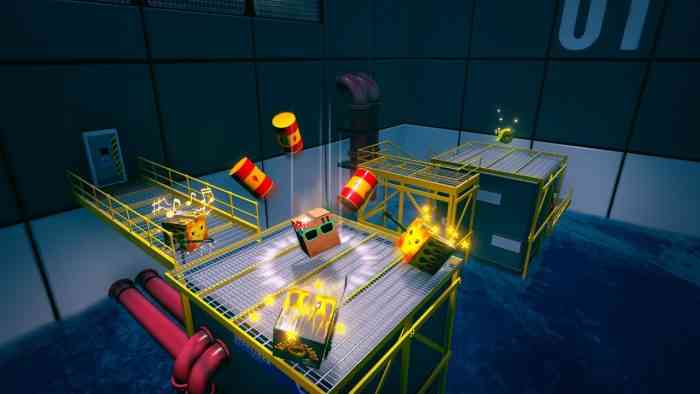 Unbox: Newbie’s Adventure is definitely a game that started with a simple concept, “let’s make a platformer where the lead character is a box!”, that evolved into this game. The problem is that everything about this game is just boring and uninspired, aside from that initial concept. Sure, plodding around in a box is amusing for a few minutes, but that’s about it. In each world, you’ll need to collect Stamps. To collect stamps, you’ll need to either find them hidden throughout the world or complete tasks for other boxes. These tasks range from traveling from Point A to Point B, racing against a clock, or exploring a mini-area hitting switches. If you’ve played a 3D platformer before, you’ve completed these tasks before. Once you collect enough stamps, you’ll get a chance to fight Boss Wild in a “Boss Fight”. It’s just so… meh. The actual controls are simple enough and you have a cool ability called “unboxing” which is essentially a double jump that will have you scaling tall surfaces in no time. When it works, the movement in the game can be a lot of fun, but it always seemed like whenever I got some momentum going, I’d end up getting stuck on an object or in a wall, or fall into a pit of water (touch water twice in a row, and you drown – sending you back to a checkpoint), or the evil Wild Card boxes will appear seemingly out of nowhere to slow you down with their blast of sound.

Fortunately, Unbox features an offline multiplayer mode, with quite a selection of modes and levels to play. It’s a little surprising and disappointing that there was no online mode, but if you’re the type that likes some couch multiplayer action – you might find a decent amount of replay value here. Of course, the developers should have included the option to have “bots” in the multiplayer modes. This would have made the mode more accessible to people who might not have any friends nearby.

The graphics are pretty simple and lack any real “wow” factor. As I mentioned before, each box has a unique look, but they’re still just boxes. You can customize Newbie with an assortment of different looks that are unlocked as you progress through the game. I found myself heading back to the clothing store and changing him up a few times. The worlds are nothing spectacular; a beach setting, a snow setting and a jungle setting – been there, platformed that. The one highlight was the draw distance – you could often see quite a substantial distance away. This was particularly impressive when you were climbing to great heights. Of course, it’s worth mentioning here that there were some graphic/level hiccups throughout – I fell through the world once, and I frequently would get stuck (fortunately, resetting Newbie to a recent checkpoint was easy enough).

In Unbox, all the conversations are conveyed via text, with various grunts that go along with the text to create the illusion of talking. It’s the same thing developers used for Banjo Kazooie, back when voice acting was less the norm. Nowadays, there really isn’t an excuse to not include voice acting – and the lack of it really cheapens the whole experience. Maybe it was a budgeting issue, I don’t know. What I do know is that the text bubbles were distracting and annoying – especially when I was in the midst of a race and the text bubble appears right over top of Newbie, making it difficult to see. The music in the game is definitely one of the game’s highlights – each world has its own music, and it’s very well done. 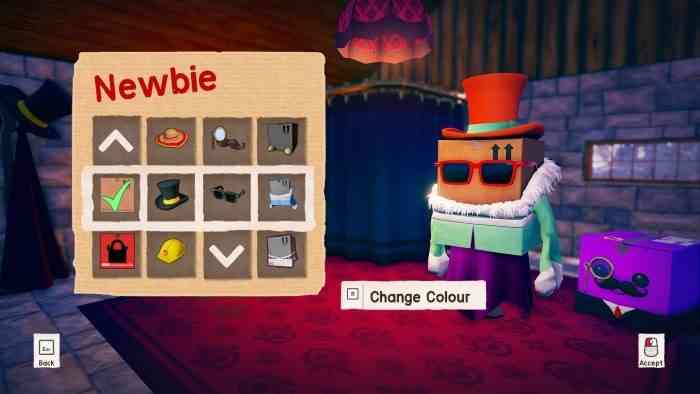 Here’s the thing, Unbox: Newbie’s Adventure is a platformer that doesn’t bring anything new or fresh to the genre and can be downright frustrating at times. Rather than try and evolve the genre, developer Prospect relies on simplistic standards that have been done to death. It’s not visually impressive and the sounds are generally bland, especially the “grunting” conversations (though, as noted, the musical score is very well done). Considering this is a “budget” game, you’ll actually get a decent amount of playtime from it. While the PS4 doesn’t keep track of my playtimes, I would imagine I probably logged in at least five to six hours into the game (and if I was compelled to find all the collectibles and get all the PlayStation Trophies, I probably could have added another two to three hours to it). Local multiplayer is definitely a nice surprise in any game these days, but I’m disappointed the developer didn’t also include an online multiplayer mode. I guarantee this game won’t offer you many wow moments but there will be some moments where you’ll just throw up your arms and ask “what the hell were the developers thinking?!?”. It’s possible your kids might get a kick out of the game and if you absolutely love platformers, you might find some redeeming moments contained within. Unbox with caution. 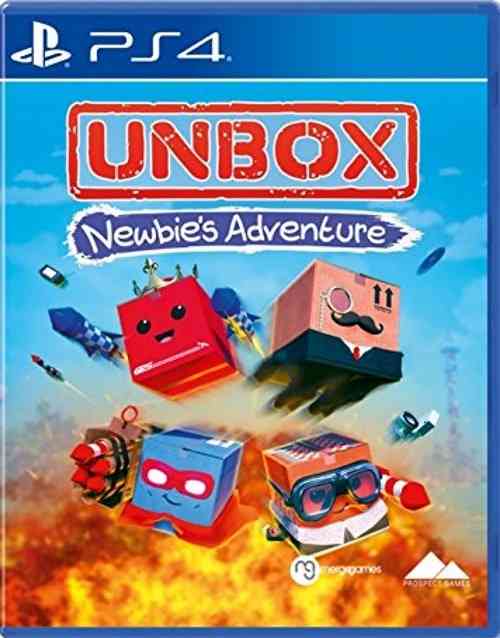 Wavetale Diving Into Release Pool On PC and Consoles
Next Lone Echo Review – It’s a Good Day to Own an Oculus Rift
Previous Yonder: The Cloud Catcher Chronicles Review – Fishing and Farming in a Wonderful Open-World