EA Sports UEFA EURO 2012 is a Downloadable Content (DLC) pack for FIFA Soccer 2012 and features all 53 UEFA-member nations.  With the UEFA tournament right around the corner, EA Sports has taken the somewhat usual move of releasing this tournament tie-in game as DLC.  After some extended playtime with the game, it can certainly be seen as its own stand-alone game with the amount of content it has, but is it really worth the $19.99 price tag? Read on to find out.

As I just mentioned, EA Sports UEFA EURO 2012 is a digital add-on content to FIFA Soccer 2012 and features all recognized UEFA teams. Not only that, but it is the only officially licensed videogame of the European Football Championship, which will be starting June 8th, 2012 in Poland and the Ukraine. Not only is the number of national teams staggering for this DLC (53 in total), but I was impressed with the amount of content contained in this DLC.  This could have easily been released as a stand-alone game but EA Sports did the right thing and released the game as DLC.  So in terms of making this DLC affordable, the FIFA team at EA Sports get plenty of kudos.

There is no question many, including myself, will argue UEFA EURO 2012 is essentially FIFA 2012 with European teams as nearly all the options and game modes are transferred.  The physics, visuals, and gameplay remains by in large the same.  So this is FIFA 12 with a different skin.  But this is not a bad thing as FIFA 12 was an outstanding game.  Despite this, there are some new wrinkles added to the mix. 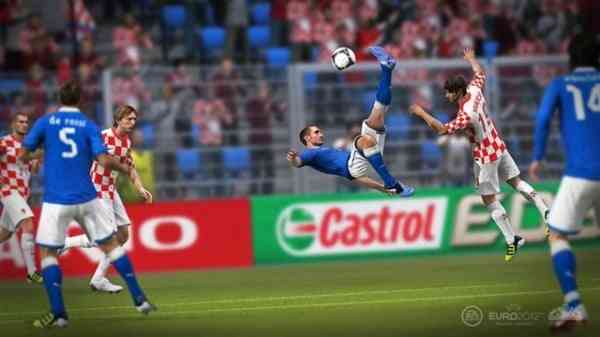 In addition to the tournament style mode where you will take your favourite UEFA team through the tournament in an effort to claim the cup, UEFA EURO 2012 features an additional new mode called expedition mode. The expedition mode is where you customize a team to compete against all the UEFA teams. In this mode, you build your team by competing against others and eventually sniping star players from other teams.  It is by beating teams how you accumulate a decent roster as you progress along.  You can also import your Virtual Pro team from FIFA 2012 to use as well.  Needless to say, it

As I suggested above, one of the key elements that won me over was the depth regarding the amount of players in the game and the customizations. Staying true to the tournament, UEFA EURO 2012 has all of the 53 teams featuring actual players from their respective teams.  In terms of customizations, you can customize your own team with numerous badge styles, colors, away and home jerseys and more. For gameplay that involves around 22 characters on screen, this is quite impressive. Speaking of the characters, you are completely in charge of who is in your starting 11 if you choose the customization route. Furthermore, you can choose which tactical position your team will play with. If that’s not your flavour, you can still play with the starting 11 of any of your favourite UEFA teams.  Whether it be playing with an existing team or your own team, this DLC will give you some options.

I spent the bulk of my time playing the simulation tournament.  Here you pick one of the officially licensed teams, you are then thrown into your group and from there you can jump right into a game.  Setting up your lineup, and tactics are exactly as they are in FIFA 12.  So there is no new menu system to figure out and no massive gameplay changes. The games themselves run very smoothly and feel exactly as they do in FIFA 12.  The atmosphere is great and the games themselves feel very true to life. 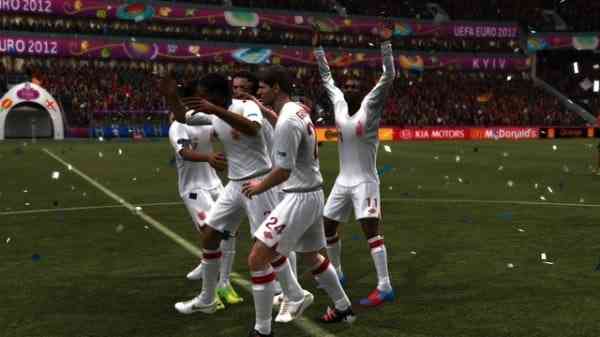 UEFA EURO 12 also features some online play as well. I found connecting to EA servers can take some time in between those pesky load times, but for the most part I connected without a hitch.  The games I played contained little to no lag, which is vital in a sport of this nature.  There is also a challenge mode, which throws you into a particular situation that is changed periodically. There are also other modes such as kick-off which is akin to an off-season or exhibition match.  As you can see, this DLC offers up a decent amount of modes and there is a little more to this game than simply playing through a simulation of the football championship.

The visuals themselves are pretty much the same as FIFA 2012’s and work nearly flawlessly.  Realism is the name of the game and the FIFA development team have once again nailed it.  In terms of bugs, glitches and other issues, I did not notice any.  For me, UEFA DLC was a smooth experience and I was impressed with all the games wonderful visuals.  Everything from the stadiums to the players themselves, the development team has done a wonderful job capturing the authenticity of the EUFA experience. 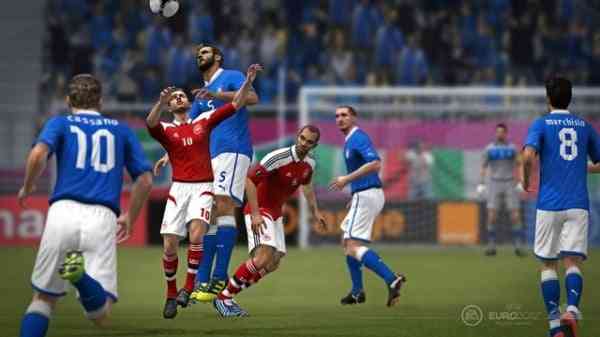 Much like the games visuals, do not expect anything different in terms of the games sound. It is the typical easy-listening pop/rock soundtrack that is meant to make you focus on the game. However, while playing the game, the announcers seem to drown every other sound out and if it wasn’t them, then it was the buzzing of the crowd. Granted, the sound levels are completely adjustable, but the default levels made it difficult to hear some of the things I enjoy in soccer games such as kicks, on-field chatter and other sounds you would typically hear in a soccer game.  This being said, I am certain many will love the new commentary brought in specifically for this game.

Overall, EA Sports UEFA EURO 2012 is a good piece of FIFA 12 DLC that provides numerous options and a ton of customizations. UEFA EURO 2012 shines in terms of keeping with the feel, gameplay and look as FIFA 2012.  I was also impressed with the amount of depth this DLC had to offer. The polish is certainly there but at the end of the day this DLC is merely FIFA 12 with different skin and geared for those who will be tuning into the 2012 UEFA European Football Championship next month.  So if you have a burning to desire to play with the UEFA teams in this tournament style set-up, then taking the $19.99 plunge is your best bet.