In Episode 1: A New Day you take control of Lee. The game starts out with Lee being escorted out the city of Atlanta in the back of a cop car, for a crime that he may or may not have committed.  After some lengthy banter with the escorting officer, an accident occurs and Lee eventually awakens on the side of the highway with zombies lurking at every corner.  On so the journey begins for Lee as he encounters new characters and is forced to make difficult decisions at every turn. The Walking Dead game’s timeline runs concurrently with the comic’s timeline timeline. In the comic, Atlanta is the big city where the events of the early issues take place. I have to say it was cool to see crossovers with characters from the comics in the game.

While you are riding in the back of the police cruiser, you are introduced to the games conversation system. When prompted to speak you are given a bunch of choices which are assigned the face buttons. The responses can range from being kind, rude, angry, lying, telling the truth and so on.  Also, you are only given a short amount of time to make your choice. The choices you make in the game are important and much to my surprise permanent and likely carry over into future Episodes. Your responses and the tone of those responses are remembered by other characters and it affects how they treat and respond to you later. 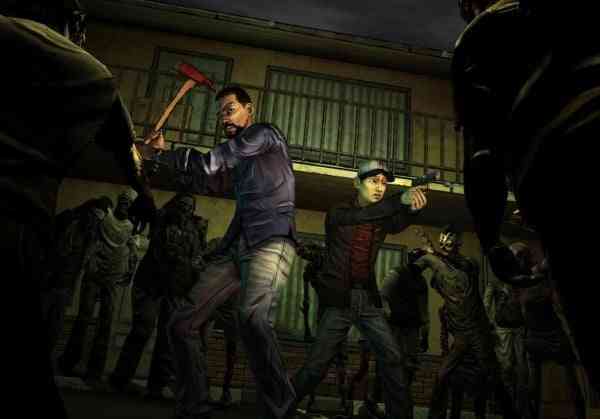 The controls in the game are fairly simple. You use the left stick to move Lee, and the right stick moves a cursor. Moving the cursor over certain spots and items allows you to interact with that object by assigned actions to the face button. This allows you look at things for more detail, talk to people, open/pick up objects, and even kill Zombies. I am assuming that these controls work better with a mouse and keyboard but they are fine with the controller.  This being said when a zombie is approaching, moving the cursor and triggering the correct response can be difficult.  That panicky feeling leads to some wrong moves at times and often I wished the game featured some standardized melee and attack buttons.  Using the cursor to select the action took me away from the experience somewhat.

After that initial segment where you are interacting with the officer and subsequently involved in a crash, after a couple of zombie encounters Lee finds himself in the backyard of a little girl’s, Clementine, house. A little bit of snooping around and you discover that her parents are not likely coming back and that she is alone. As a parent of a little girl myself, I was instantly drawn into this aspect of the game as I felt compassion for the little girl and I wanted to protect her.  Throughout the game you are encountered with many tough decisions when it comes to Clementine and her safety is only a portion of those difficult decisions. Shortly after leaving Clementine’s house you will run into other survivors and will engage in even more difficult conversations, and on several occasions have to decide who lives and who dies.

I have never played any previous Telltale’s games, so The Walking Dead was a little weird for me in that it didn’t feel like a traditional zombie game, more like an interactive movie. There are some great puzzle moments and interacting with the characters including uncovering the back stories was great.  Despite this it just did not feel like I had a lot of control over the action. Not that it was necessarily a bad thing as this style of game works perfect for The Walking Dead.  After finishing my first playthrough (just under 3 hours) I immediately started another game to make different decisions. There are three save files so I am guessing Telltale was expecting people to play though multiple times, and with decisions you can make over the 5 chapters I have a feeling that 3 save files won’t be enough. 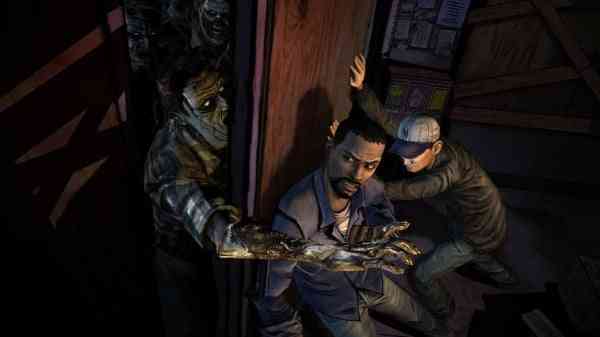 The Walking Dead Episode 1 is a single player only game with a rather short single player progression mode but like I just suggested there is incentive to play through it again just to see what outcomes will surface after you make some alternative choices.  One of the slick little aspects of the game is that after completing it, a menu appears which shows you a percentage of other players who made the same key decisions as you. It was also nice to see that even though the game’s story is split across 5 chapters.  I have to mention I also liked the fact Episode 1 finished without an annoying cliff hanger.

The graphics in The Walking Dead are simply amazing.  The hand drawn style really captures the comic book feel, and even though the comic is black and white, Telltale has some beautifully coloured environments. The voice acting is great, and the zombies sounds can give you chills down your spine. The lip syncing could have been a little tighter but this is merely a small hiccup in otherwise great looking and sounding game.

While The Walking Dead: Episode 1 – A New Day is only a two to three hour affair, it is game that manages to perfectly capture the essence of the comics and TV series.  For only 400 points ($5.00), Episode 1 is one of the more unique games on Xbox Live and one that fans of the franchise needs to pick-up.  Fans of fast-paced hack and slash zombie killing games may get annoyed with the style of game but those looking for an experience which stays true to the brand, then this is the best 5 bucks you even spent.