For those of you who have an itch for something God of War’ish then Bloodforge maybe the game for you; however, I should warn you this game suffers from several issues and at the end of the day is anything but a God of War quality game.  Before I get into the issues I had with the game, let me just give you some background. First you can find Bloodforge in the Xbox Live Arcade for only 1200 points. So keep the price point in mind when reading this review.  Second, many games on XBLA can be hit or miss.  Bloodforge falls somewhere in the middle but more towards the miss end of things.

Once you download the game, the main game screen gives you the basic line up of single player, options, challenges, downloadable content, achievements, and extras (which are just previews to upcoming or already released games).  I spend the bulk of my time with the game in the single player campaign.

The game takes place in a land of ice, snow and a lot of bloodshed. Our main character is named Crom who suffers from nasty dreams when he sleeps due to a troubled past full of war and death. Coming back from a hunt he finds his village on fire and under attack by monsters.  His wife is killed in the crossfire and so he swears revenge on the gods who have launched the attack and so begins his journey. Along the way he encounters another lesser god who is willing to help guide him and gives him a magic gauntlet which can absorb the blood of his slain foes. 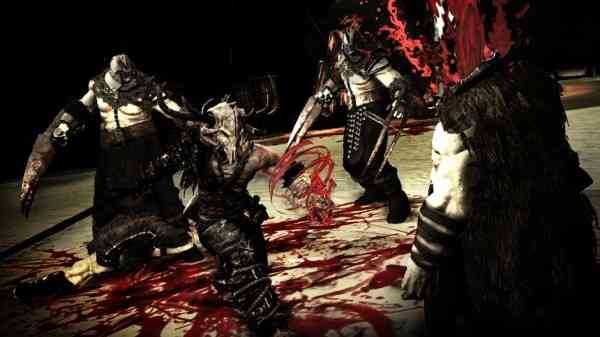 You will find yourself slogging through eight long levels in the game separated into frequent checkpoints.  The nice thing about the checkpoints is if you die you do not get sent back too far. The game also auto saves a lot which you think would good thing but I found myself restarting an area over and over again with very little health because there is no manual save slots.

The controls are your normal layout for a third person brawler. You control Crom with the left analog stick and the camera with the right. At your disposal you have a light attack, heavy attack, an independent crossbow button and jump all laid out on the main X, Y, A, and B buttons. The trigger on the left is for dodging and the right trigger is for your rune power which is held down to activate while you use one of your attack buttons. The left shoulder button is for access to your quick items (heals and special power ups).

I found the gameplay to be fun at times because of the number of possible combos that you can string together with various button combinations. You can find all the combos listed by pressing the select button. Did I mention that you will get other weapons in the game other than the sword you start out with?  Eventually you find more powerful swords, hammers, or claws on altars during the game. You will also find power ups in forms of health, and blood points which is used towards upgrading your magic.  You will also find others that give you special temporary powers like “rage”. Rage is triggered once your rage bar is full.  You then go into a bullet time mode and are able to cut down enemies faster for a limited amount of time. You also have a set of runes that can be upgraded using the blood you collect at certain (and very few) alters found in the game. The mana bar is limited to the number of swings with your weapon that you can do that will have the magic ability tied to it. The number of swings you can do with the runes can be upgraded throughout the game but I rarely used it.  I just found it awkward to attack with the button and right trigger held down at the same time while trying to hit something. Also found that even when the runes are powered up, they really didn’t make much of a difference. I also found this with the different weapons of the game. I tried them all but stuck with the sword because even with all the different combos it worked the best in my opinion. 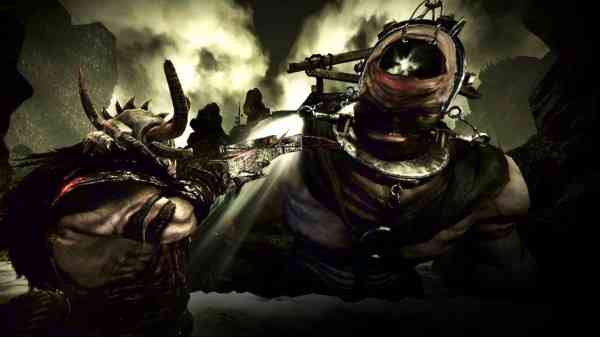 Now we come to a weapon I need to talk about which is the crossbow. I found it odd that the game would be designed with a crossbow dedicated button. At first I thought it would have been used for other projectile weapons later in the game but none ever arrived other than stronger versions of the bow. It is almost as if the game included the crossbow to make up for some of its shortcomings.  This being said, the game really shines when you pull off huge combinations of attacks.  The only drawback is when you encounter some clipping issues or other issues where I would walk right through the enemy. This happened many times.  Also, I found I could make certain enemies spin on spot if I got in too close which was comical.  Another fun thing to do was enemy surf which was jumping on top of a large group and sliding around on their heads for a while. The finishing moves are also a little entertaining. After wailing on an enemy for a bit they will become dazed. So when you hit them with the heavy attack button, you will finish them off in various gory delights in a small cut scene. The finishing moves are quick and don’t take away from the momentum of the gameplay but I had cut scenes not work a few times which just left Crom standing there while ghost slashes showed up on the enemy till it fell to the ground in pieces. I even got stuck in the map so I was only looking at my feet close up and under the entire level. I had to quit the game and restart it. This happened more than once to be and always seemed to happen when an enemy would knock me down if I was jumping.

Another problem which hindered gameplay was the camera. It had big issues keeping things in perspective in tight places compared to wide open arena type spots. I had the right hand analog stick to adjust it myself but it seemed way too wild and loose so I rarely used it. I had a basic idea where all the enemies were on screen so I just steered Crom in that direction to attack and the camera centered itself out.

After beating the single player game which took around the 8 hour mark the only real thing left is to play Challenges. They are a set of five stages where you can change the situations you face per round like strength of enemies, mana powers, and exploding corpses. After going the five rounds you can challenge friends to best your score. The downloadable content at this point seems to be various skins for the main character and other weapons to use. There is also a few “making of” videos that you can purchase. The leaderboards seem to be fairly busy with stats of other people’s games and how they did overall. 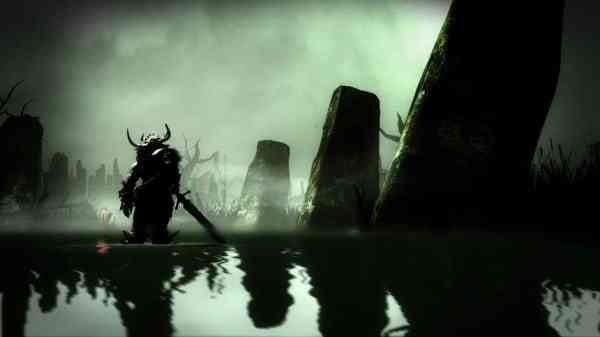 I did enjoy the overall look of Bloodforge. The game reminds me of a Sin City comic because of the black and white with a splash of color here and there. Also you can tell the game was inspired by Gears of War because whenever you run with Crom the screen has the similar shaky camera effect. Each area of the game has a specific color that it is centered around which seems to work most of the time but I found that some other levels are harder on the eyes than others. Crom is very well designed with his barbarian look crossed with Scottish influences. Enemies are also nicely designed but there seems to be only 5 different types of enemies and have a different color palate for later levels. Environments are kind of vacant as there is nothing really to interact with. It would have been nice to have been able to smash a few things here and there. There was also many other times I wanted to venture to a certain area only to find out I couldn’t.  So to that end I found the experience quite linear.

The audio in Bloodforge is mixed. The overall score for the game is good with heavy drums and such which gives it a nice tribal feel but the battle music is always the same and became tiring over time. The voice over work is also mixed. Crom is voiced well but some of the gods seem to change accents in mid-sentence. For example, the lesser god that helps you seems to switch from a Nordic accent to something that sounds Italian in mid-sentence.

Overall, Bloodforge for the Xbox Live Arcade was an enjoyable experience.  This being said, the game felt unpolished and could have used several more months in the shop to iron out some of the issues.  If you are looking to burn 1200 Microsoft points on a mindless hack and slash third person game then Bloodforge may be right up your alley; otherwise, you may want to pursue far better alternatives already available on the Xbox 360.