As a huge fan of PC gaming, I really appreciate tools that can help restore my computer.  I’m always working or playing on my PC, and I find myself constantly downloading large files.  Unfortunately for me this causes my PC’s performance to begin to decay slowly.  With this in mind, I had an opportunity to check out iolo System Mechanic, and in the end I have to say that I fairly impressed some many of the results.

Among these tools are Designated Drivers, which manages drivers in an attempt to keep your PC problem free, and a strong anti-virus program.  I have thoroughly enjoyed using iolo System Mechanic 10.8, and I feel it is one of the best PC utilities around, as it is able to tune-up a computer and clean up the hard drive with a very efficient and user-friendly interface.  It also offers informative, easy-to-understand help about the problems that can plague a computer. 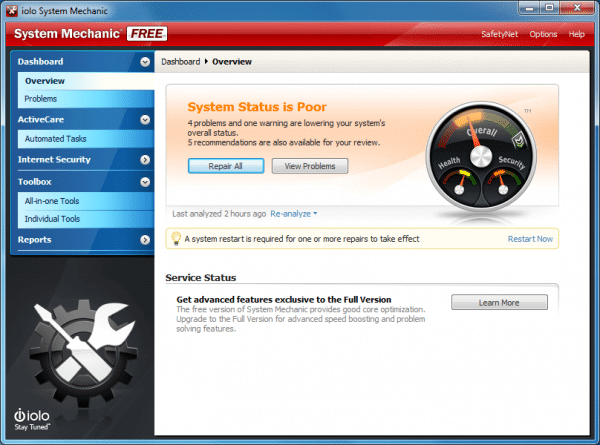 Compatible with the pre-release version of Windows 8, Windows 7, Vista, and XP PCs, iolo System Mechanic 10.8 requires only 30MB of disk space, 256MB of RAM, and an Internet connection for activating the license.  Unlike most PC tune-up utilities which have strict license restrictions, iolo System Mechanic 10.8 lets you install the software on any number of computers within a household. This is a most welcome feature as most modern homes have more than one PC and it hurts to buy multiple copies of the same software.

The interface is approachable and well thought out. The program has been constructed in a fashion that allows computer novices to easily navigate through its many menus.  Iolo System Mechanic 10.8 also gives you the option of installing a useful widget on the desktop that gives you an “at-a-glance” PC health and security readings.  From this widget, you can launch any number of iolo System Mechanic 10.8’s features to begin the clean up process.  This widget is optional but I did find it quite a nice feature.

The Overview screen opens by default when the program is launched.  This is the screen that serves as the user’s dashboard.  Clicking the arrow next to it dropped down a menu bar that presented two choices: “Perform Quick Analysis” and “Perform Deep Analysis.”  The former is a one to two minute scan that looks for the most common PC problems.  The “Deep Analysis” is a seven-minute scan that checks for all problems.  Underneath the reading a highlighted message appears: “Boost speed and stability by removing redundant programs with CRUDD Remover.”  CRUDD is iolo’s acronym for Commonly Redundant or Unnecessary Decelerators and Destabilizers, in other words, programs that clog your system.  The concept behind the CRUDD Remover is to eliminate those unnecessary programs as each installed application eventually slows down your PC’s performance.  After running CRUDD Remover,  six problems were detected on my PC, which were explained thoroughly and clearly in a “Problems” screen.  Following the scan, I restarted my computer as it prompted me to do so.  My start up time shrank by approximately eight seconds.  I found myself quite impressed. 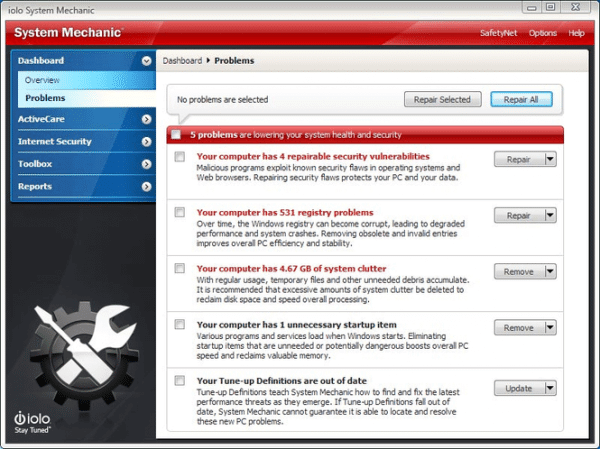 Designated Drivers is a feature that helps you locate drivers that have been tested and certified by Microsoft.  I liked this feature in theory, however Designated Drivers was only able to locate 4 driver updates for my PC, while a separate program I ran found 14 drivers out of date.

The NetBooster Internet booster option is designed to increase the speed of your Internet connection by optimizing settings.  This option is most beneficial prior to running web-connected video games and assists in opening web pages faster.  This option is a neat idea, however the boost it provides is hardly noticeable.  Whether it was on or off, I did not notice a difference in my web browsing or online gaming experience.