In the past I have had the pleasure of using the Tritton AX 180 headset and I thoroughly enjoyed my time with it. When given the chance to review another product from Tritton I was incredibly excited. After taking the Kunai through a few trial runs via my PS3 and PS Vita I can honestly say I’m quite impressed by it. Sitting at an affordable $60, the Kunai presents as a comfortable and adaptable headset.

Tritton has always done a great job including all the necessary bits and bobs in one box and the Kunai is no different. It is attaches to the PS3 via a usb plug adapter and it simply plugs in to the PS Vita like any other pair of headphones. The content box slides out of a matte sleeve with glossy accents, and one end reveals the design of the ear cups. Inside, there is a large plastic locking mechanism that holds the headset in place and an insert for the quick installation guide. Once you pull the content box from the sleeve, the headset design is showcased well and easily accessible with the detachable microphone held securely in its molded place. All the plugs and cables that you need to use this headset are found in the box too.

The Kunai boasts an attractive design. The Kunai name can be found written in silver, and it looks sleek against the glossy white frame. In the specific model we were able to review there was little to no color to be found. A black stripe went from ear to ear over the head support to add some simple detail. Although it is plain in its color scheme, the Kunai looked very sharp. For those wanting a little more color the Kunai has two other options; you may prefer red with black trim or black with silver trim. Considering the Kunai headphones are a smaller size then Tritton’s other headsets, the Kunai still retains Tritton’s heavier design aesthetic. 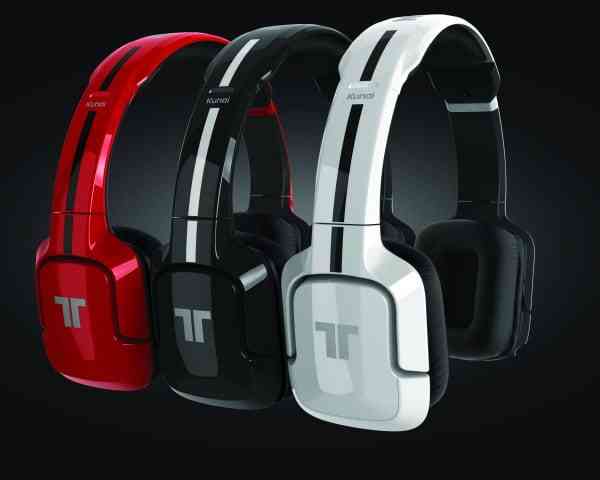 The Kunai comes equipped with a 3 foot attached cable with a 3.5mm plug. The microphone works with the PS Vita and smartphones out of the box. When using it on the PS3, an additional cable is needed. A 3.5mm end affixes to the headset cable, an RCA audio pass through connects to the TV, and a USB connects to the PS3 console. When the adapter is in place, attaching the headset to the PS3 extends the cords length to 14 feet. While connected to the PS3 the Kunai’s adapter offers remote volume control for both output and input volumes. This is fantastic, but when it comes to the using the Kunai on either the Vita or a phone, this feature is unavailable. If these options could be made available, it would give players the ability to have full control while gaming and multitasking on either a phone or the PS Vita.

On the sides of the Kunai I found traditional adjustable sliding arms. The earpieces fold 90 degrees inward should they need to be stored in a flat area or you want to hang them off your neck when taking a break. Currently there is no pouch or protector for the headset. It would be nice if Tritton would release an optional case of some sort so that when you are out and about with the Kunai you wouldn’t have to worry about banging it up. The detachable microphone attaches just as easily as it detaches. A rubber plug for the empty slot when the microphone is detached would be preferable to keep it clean.

Tritton’s Kunai headset provides a solid experience right out of the box. Initially, I had concerns regarding the smaller ear cups. After putting the headset on my worries were pushed aside. The ear cups are rectangular in shape, and have comfortable padding around them. At the top of the headset there is a soft padded area that offers head support which allows it to fit snugly and comfortably for long periods of time. The initial set up is simple and easy to follow with the assistance of the start up guide. 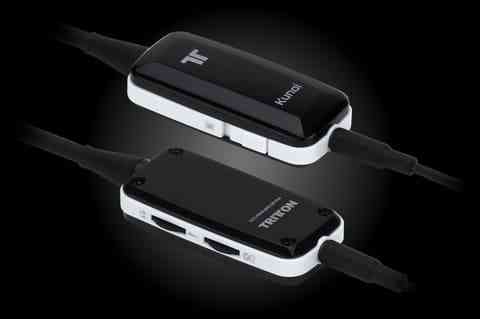 Once I was hooked up and I was ready to go I booted up my PS3 and tried out Killzone 3 thinking the game would provide a nice soundscape for the Kunai headset. After a couple of hours I found only a slight discomfort around my ears, but elsewhere I was very content and the bit of discomfort was hardly noticeable. The sound provided by the Kunai is fantastic and the microphone works flawlessly. Following my PS3 testing session I used the headset as headphones on my PC, my Vita and my iPad.  The Kunai comes equipped with a very short cable (3 feet to be exact), which is intended to be used with the PS Vita for travel purposes. The shorter cable works great for on-the-go audio support, but when using the headset for other purposes you’ll want to attach the adapter cable.

When playing Uncharted on the Vita, each bit of audio came through crystal clear and every song I listened to came through with rich, full sound. This is impressive considering the Kunai is only a $60 headset. As mentioned briefly earlier, the microphone tested well on my PS3. I found no issues involving noise canceling and there was little to no echo when used for gaming. The Kunai’s sound comes through crisp and very discernible.  Overall I would say that the Tritton Kunai sounds fantastic. It could easily pass for a $100 headset based simply on the crisp highs and the rich lows. When connected to the PS Vita, the Kunai gave me the best audio based experience I’ve had with the Vita so far.

All things considered, the Kunai is a great product. Given that the Kunai works with the PS3 and PS Vita, as well as serving as a fully functional headset for other standard devices, you definitely get your money’s worth. With its crisp sound, sturdy build and attractive design, the Kunai is a solid headset with reliability that you won’t find elsewhere for the same price.