I wish I had better moves.  I am far beyond my club days but I was that guy on the dance floor biting his lip and pretending he had moves.  Just Dance 4 isn’t the first dance game I’ve played, but it’s the second.  Dance games, or just dancing in general, really aren’t my strong suit, but I am a pretty equal opportunity gamer so when asked to give Just Dance 4 a spin for review I couldn’t resist.  Just Dance 4 isn’t without its flaws but it excels where it is most important, it is really fun.

If you are new to dance games, the premise in Just Dance 4 is really simple.  Pick a song you like and follow along to the models dancing on screen.  All you have to do is mirror what you see.  Sounds simple right?  Nope!  The whole mirror-their-left-with-my-right thing took a little bit of getting used to.  I’m having a little fun at my own expense here but if you are new to dance games there is a slight learning curve.  My brain seems to always want to move the wrong arm or leg for some reason. 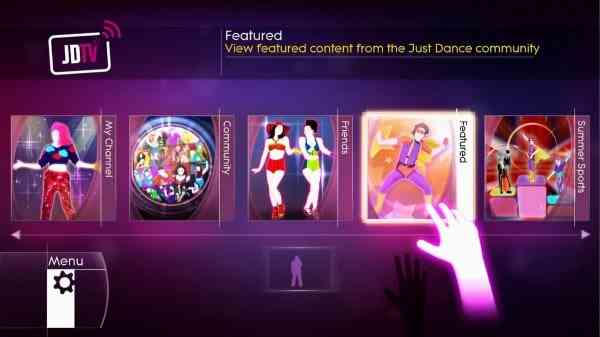 Just Dance 4 requires the Kinect sensor to play and can be controlled completely via gesture and voice commands.  Much like other rhythm games your performance is ranked out of five stars.  This score is based on how you pull off each dance move in time with the music.  Remember Guitar Hero where getting it perfect was the end-all-be-all?  That isn’t the case here.  The great thing about Just Dance 4 is that you can focus on precision if you want to but the game also gives you ranking on other things like effort, which not only adds to the fun but also makes the game more accessible for a wider audience.

In addition to the various modes that return from previous games there is a brand new Battle Mode.  Battle Mode pits two players against one another in a test of dance skills.  Each player has their own set of moves and health bar as they battle.  Whoever performs best gets that’s character’s song track played in full.  If you are brave enough, you can also upload video clips to Facebook to share with your friends.  For anyone with an interest in fitness there is also a Just Sweat mode.  With fitness specific routines and a calorie counter, you can certainly work up a sweat playing but it is really just cardio.  If you are looking for something truly fitness related there are better options out there but I do give them bonus points for looking at and implementing this feature.

Also new is the fact you can play with up to three friends (four players total) at any one time.  The advertising for Just Dance 4 makes a big deal about this.  It is a great idea in theory but I am left wondering just how many people will have the room to actually make this feasible given the space requirements the Kinect has for even a single person, let alone four.  Two works fine, as evidenced by my two nephews who taught me I truly have no skills.  The neat thing about any of the multiplayer modes is that each player has their own choreography. 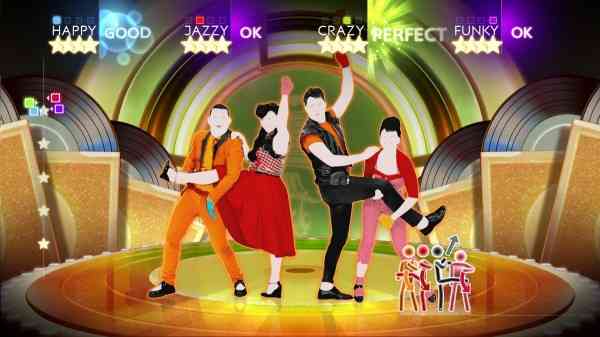 Just Dance 4 carries over a similar look from previous games.  Characters on-screen lack any sort of facial detail but are unique in their costumes and key colours that accentuate key movements.  A freakishly bright colour palette looks like it was borrowed from the movie Tron.  In most other rhythm games my attention is generally focused on the “runway” but not here.  Backgrounds pulse and animate in time to the music and range from psychedelic light and shape shows to monsters trashing cities.  As garish as this might all sound it actually works.

In a game like Just Dance my opinion on how it sounds completely has to do with the track list.  Sporting over forty five songs from several genres, there is bound to be something here that people from all ages will recognize.  Heck there is even a nod to the 80’s chick flick Dirty Dancing and a little bit of Elvis.  Unfortunately even Elvis wasn’t enough to get my dad to play.  I’m not typically a top 40 or pop music guy but the songs in Just Dance 4 are as catchy as they are recognizable, even for me.  When the beat is pounding through a decent surround sound system it is hard not to tap your feet even if you’re not playing.  There is also the promise of additional songs via DLC.

While I might sound overly critical at times of what Just Dance 4 offers, it is undeniably fun and that is ultimately most important.  Despite the fact this game seems to have fallen into a schedule of yearly releases, Just Dance 4 is well priced and comes with a good variety of tracks, modes and multiplayer options.  This is a total party game for when friends come over or if you just feel the need to bust out and dance.