Trine 3: The Artifacts of Power Review – Please Sir, Can I Have Some More?

Trine 3: The Artifacts of Power is a small game that got some big things right. The amount of polish that went into this game shows in every colourful, beautifully stylized view; as well as in every creative use of its well tested puzzle mechanics. The game is a puzzle platformer, utilizing three heroic leads with varied abilities when it comes to interacting with the environment and navigating its obstacles. Though the plot itself lacks substance and length, how the story is told is a kind of storytelling feat within itself. Trine 3’s most glaring issue is how little content it has, and how its length is framed by the experience as a whole.

This is the first game in the franchise to implement a 3D world to explore. This shift has allowed for more creative hiding places for its collectible items, with the occasional secret room accessible via puzzle or platform. Yet, this choice accounts for a lack of variation in obstacles and solutions given the pricey contrast between 2D and 3D environments. Despite this lack of variation, however, existing puzzle mechanics are implemented in new, interesting ways throughout the game. Gone also are the skill trees of the series previous titles, leaving each of the three heroes with only their starting moves to work with. Puzzle platformer fans will be let down by a lack of challenge found within.

Combat – primarily against waves of weak minions – is also still present. Zoya the Archer can shoot enemies, Amadeus the Wizard can drop conjured boxes on them, and Pontius the Knight – who seems best suited to these sections – can slash, body slam, or charge them. I should also note that the only time that Trine 3’s 3D environment felt unwieldy to me, were instances in which Amadeus was left to combat enemies by smashing boxes on them. Otherwise, animation and difference in movement for the three playable characters – beyond their archetypal abilities – also provides a different feel in how they controlled, in a way that perfectly suited their individual personalities.

“Though the plot itself lacks substance and length, how the story is told is a kind of storytelling feat within itself.”

An exception to the bland nature of the hack and slash minion battles was an early boss fight requiring use of more than just one character or mouse button. This boss, a golem made from junk and stone, came across more like a proper obstacle than cannon fodder. Though different solutions to defeating portions of the boss existed, by the end you were required to use at least two of your heroes to defeat it soundly. This treat of design is never repeated in ensuing confrontations. Damage in most battles is dealt from a sole source, and Pontius is the best solution for getting it from ‘point A’ to ‘point boss’.

The story of Trine 3: the Artifacts of Power (playable in singleplayer or co-op) is adequate at best. The three main characters make a decision early on in the game to try and give up the responsibility of their powers because of how ‘inconvenient’ it is to be pulled away from regular dangerous adventuring, to take part in equally dangerous adventuring in order to save the world. “How’s this for an idea,” says Zoya, one of our heroes. “If we give back our powers we can go back to living our lives like free and normal people.” Pontius and Amadeus agree faster than Anakin Skywalker could say ‘dark side’. As a result, the series next antagonist is released from his magical prison and the heroes set off once more without any further contemplation of their reluctancies. 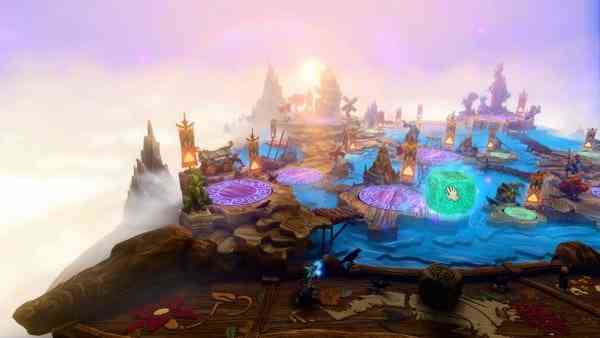 I did mention that this game got a lot of big things right, right? While the story may be inane, and the lack of even cartoon logic behind character action may be at fault, it’s an inane story told very well. Cutscenes are as rare as they are short. And story progression happens primarily through the action on the screen, the voice acted dialog between characters, and some limited narration. One chapter in particular stands out as phenomenal in this feat, as the three heroes are left to move from left to right in the confines of a storybook.

Trine 3’s screenshots do little to show just how beautiful the game looks in motion. Only, more often than not it’s difficult to see that beauty through the excessive brightness. The use of bloom here is excessive. Over-saturation of the screen, especially in outdoor segments is persistent throughout most of the game’s early levels. At first, I thought the impenetrable brightness might be concealing a lack of a background. But, once able to remove the glow I was surprised to find art beneath all that light. The backgrounds of the games early levels were filled with landscape features matching the aesthetic of the game’s art. Whereas the quality of cartoon trees might look dated for a modern title bereft of lighting entirely, a smattering of bloom might have been a better choice than washing out entire sections of the game’s colourful, welcoming aesthetic.

“While the story may be inane, and the lack of even cartoon logic behind character action may be at fault, it’s an inane story told very well.”

The musical score is exceptional. Composed by Ari Pulkkinen, the use of natural sounding instrumentals – produced by a keyboard – gives the game a bright, adventurous feel. Less prominent is the game’s unbalanced quality of the English voice acting. This is unfortunate, given Trine 3’s cast of talented industry professionals. I’d like to blame the humorous banter, which frequently lacks enough punch for a punchline. But entire swaths of exposition lack any semblance of investment from anyone but the narrator and the absent antagonist. After the mind boggling attempt to give back their powers, and the world threatening catastrophe that results, Zoya remarks, “This turned out worse than I could ever have imagined.” With the same dull inflection that I might reserve for a poor choice in pizza toppings.

If you noticed that I didn’t touch on the conclusion of the story yet, that’s because there isn’t one. The game ends abruptly after defeating a boss who warranted build up but received none. This was followed by a short cutscene of the heroes move on to what is implied to be the next section of the game. Then the credits roll. This is actually the end of the game. No comical fake out, no mid-credit boss fight or post-credit level unlock. This is the end of the game’s content. I didn’t believe this, at first, so I went to the internet for clarification. And I wasn’t alone in my confusion. 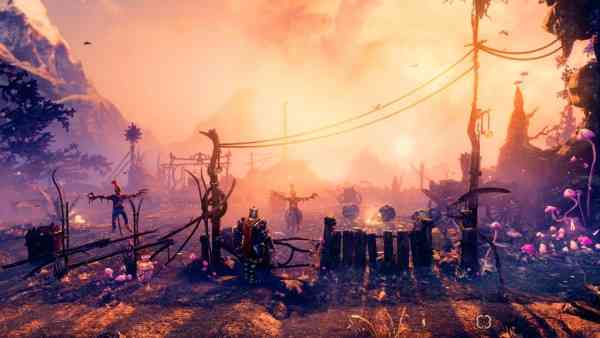 Since release, Frozenbyte VP, Joel Kinnunen has commented on this confusion and resulting community backlash, stating that they were much too ambitious for their own good with this project. He says, what was released will be all there is to the game. While the game’s short length isn’t entirely unheard of for a current gen title, that’s only the set up for Trine 3’s most problematic issue. The glaring issue in play here, is that the game promises more than what it has to offer. The gradual increase of puzzle difficulty never reaches fruition, and the abrupt end of the game’s story occurs at what feels like the halfway mark.

It’s unfortunate that the fate of Trine is in question, for everything that it got right, and for what it could have been if Frozenbyte’s vision were in line with its budget. But, Trine 3: the Artifacts of Power, in its current state, is an unfinished game. Priced at $23.99 with little chance of completion, and no confirmation from the developer on whether the story will ever be finished, the result is a tough sell. And one that I can’t recommend buying into. 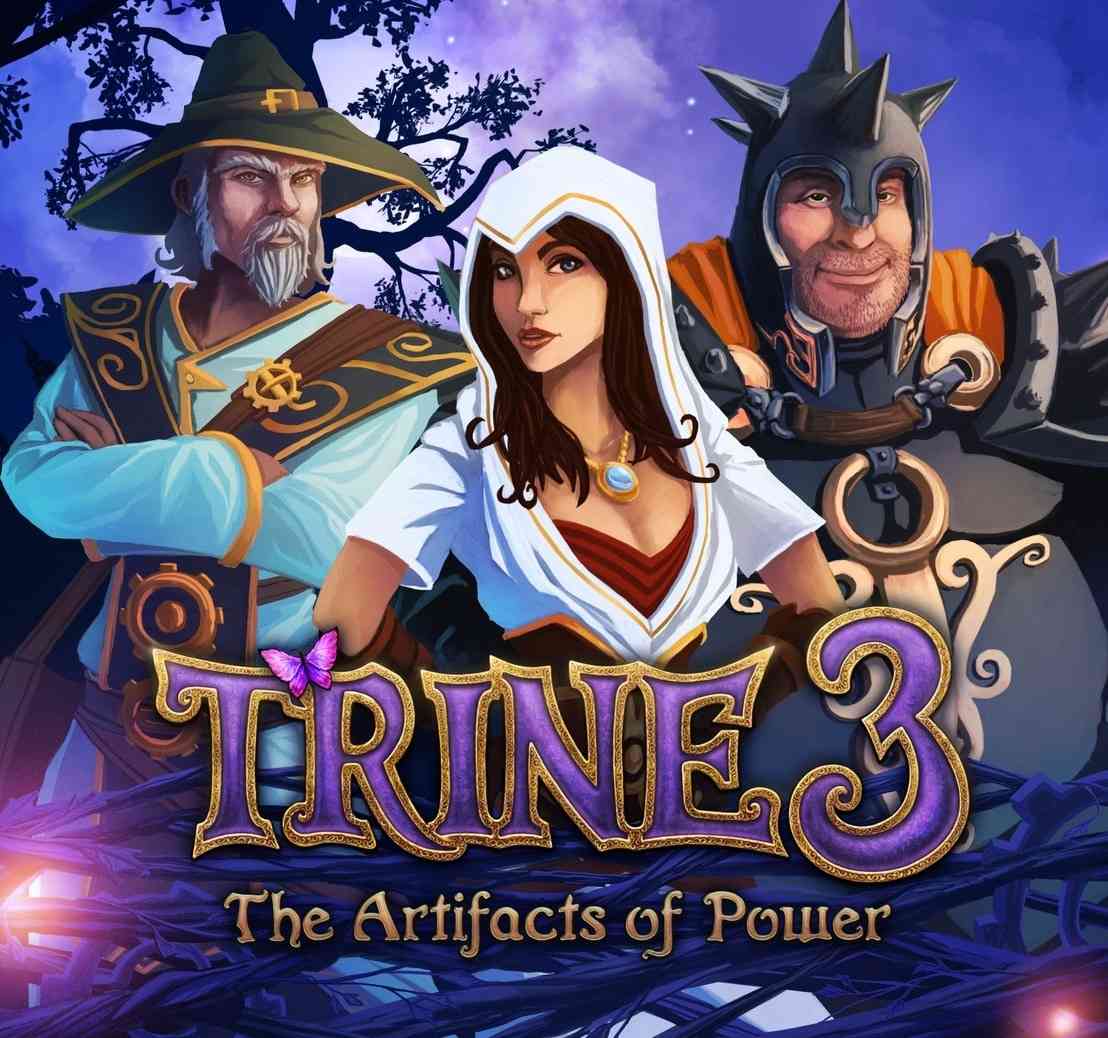 Next Dishonored: Definitive Edition Review – Back to the Shadows
Previous Warlocks vs Shadows Review – Fun and Challenging But Sports a Mangled Online MP