I previewed Warlocks vs Shadows a while back when it was in early access. While I was pleasantly surprised with what was ready, I knew changes still needed to be made. Now, just a few months later, Frozen District has deemed their game ready and you can purchase it for $11.99 CDN on Steam. I’ve since gone back to play through the content again, and while there was certainly more of it I still found myself just a tad disappointed overall.

For those of you unaware, Warlocks vs Shadows is a 2D arena fighter where your hero can move, jump, and use four different skills to combat your enemies: the shadows. There are five areas, with five levels and a boss fight in each area. As you progress, you can enhance your hero by levelling up each of the four skills, and by putting on equipment that is dropped by monsters or purchased from the merchant who shows up occasionally. Each level up earns one point to spend on one skill, so choose wisely. On the fifth upgrade, the ability itself will become enhanced and reach a new form that often comes with bonuses like faster firing rate or increased area of effect.

As for the equipment, these items increase your warlock’s stats like armour, cooldown reduction, and movement speed. You can also equip up to two weapons for higher damage and crit chance. This allows you to really customize your warlock to suit your play-style, one of the more redeeming factors of the game. There are a lot of warlocks, and a lot of ways to use each one. Aside from Horde mode, this is the only way you can get some replayability out of WvsS, but twelve dollars for a campaign that can be beaten in two to three hours isn’t too bad on its own.

“[After previewing the game in Early Access] I’ve since gone back to play through the content again, and while there was certainly more of it I still found myself just a tad disappointed overall.”

Now in the preview, one of the biggest problems mentioned was the net code and I regret to say that it’s still bad. After moving, my ping in other games has increased by about thirty generally, and this is now unplayable. If I wasn’t the host, monsters would hit me from across the screen and my teammate would teleport all over. Don’t even bother trying to play online, and stick to the local co-op or set up a LAN. This is really too bad as the multiplayer is tons of fun, and some builds synergize rather well together. Well to be honest, some builds synergize too well together…

Another big problem with WvsS is the difficulty ramp, and the ability to cheese through multiple arenas with certain characters. I played through as Jake this time, and instantly buffed his firestorm ability every time I could. This resulted in me just finding tall platforms and raining fire from the sky until everything was dead. There were only a few levels on which I couldn’t use my ultimate strategy, and these were mostly in the third area due to one enemy that seems rather overpowered. You see, instead of a difficulty ramp, you get something more like a bell curve. The first two areas are alright, the third area is very difficult, and then the remaining two aren’t that bad. This is due to the spear enemy. 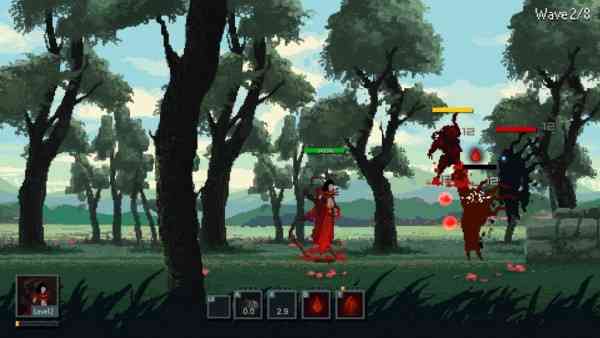 You may find the spear enemy to be a bit annoying. First, he is both melee and ranged, one of the few enemies in the game to suit both roles. Second, when his ranged attack hits, you are slowed and silenced. Many times I was forced to restart after being hit by this attack while moving through a mob, only to be nearly stuck in place and unable to cast my utility skill. The spear guy also hits like a truck and can take a lot of damage, making him quite deadly. I don’t mind a challenge, but this just seemed rather out of nowhere. He either needs a nerf, or he needs to be moved to later levels to keep the difficulty from spiking like it does currently.

In terms of art and sound, Warlocks vs Shadows has some nice pixel art that suits it rather well. The warlocks all look and play rather differently, so there is some decent variety both visually and in terms of gameplay. Each of the five areas sport a unique environment with new monsters being introduced along the way. While not flashy, everything looks good and nothing clashes. There weren’t any moments where I felt like my heroes didn’t belong in the world, and I never got lost or had trouble discerning different enemies. The sound could use some more effects and a couple extra music tracks, but it’s also well-done and lends nicely to the atmosphere. Not bad, but nothing to really write home about either.

“Warlocks vs Shadows is a fun indie game that has a lot of variety to offer, but falls short in important areas like online capabilities and replay value.”

Aside from the campaign, players can fight each other in Versus mode or team up against an endless source of enemies in Horde mode. For local play, this is great and got a ton of laughs and cries of frustration as myself and some friends fought it out. The PvP feels oddly a bit like Smash Bros, but mostly because it’s an arena free for all with up to four players. I didn’t touch the Horde mode all that much, but it seems pretty standard: pick an area, pick your warlock, go kill monsters. Both of these modes address my previous concern about running out of content, and easily add a couple more hours to the game if you’re looking for some fun with a few friends.

Warlocks vs Shadows is a fun indie game that has a lot of variety to offer, but falls short in important areas like online capabilities and replay value. If you have spare controllers and friends to play with locally, this could easily be a great game to grind through over the weekend and then boot up occasionally for some PvP action. However, if you don’t have a lot of people over and like to play games with friends, then even at twelve dollars you should probably pass this one over unless it really catches your eye. 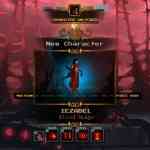 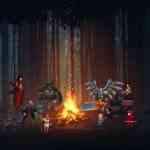 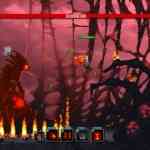 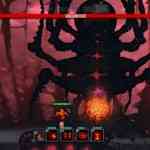 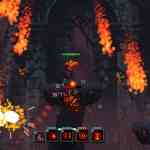 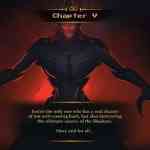 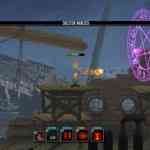 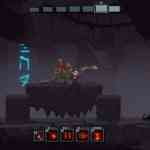 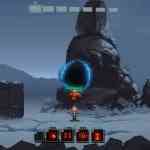 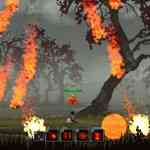 Next Trine 3: The Artifacts of Power Review – Please Sir, Can I Have Some More?
Previous Gauntlet: Slayer Edition Review – Warrior Still Needs Food, But Not Nearly As Badly