Dishonored: Definitive Edition Review – Back to the Shadows

Here we are starting to round out the back half of 2015 and the parade of remasters, re-releases and definitive editions just keeps on coming. What started with Tomb Raider (the first definitive edition I remember covering for current gen) has evolved to these graphical bump-ups hitting store shelves and online retailers almost every single week. The latest in the Definitive Edition department is Bethesda’s fantastic Dishonored. A genuine success when it was originally released in 2012 it was a hit amongst stealth and action fans alike. The question that needs to be asked is if this upgrade is worth your hard earned cash?

The term definitive, in the context used here, is ‘the most complete’ version of a game and to that end Bethesda delivers on that promise exactly. With all the included DLC (The Brigmore Witches, The Dunmore City Trials, The Knife of Dunwall) plus all the retailer bonuses that were originally included as well, this is your complete package. The retailer bonuses included give you an extra 12 bone charms when you start out so while that’s a great perk it kind of throws off the balance in the beginning by giving you a powered up protagonist. On the whole that perk diminishes as the game ramps up in difficulty mind you so it doesn’t necessarily over power the player for the entire experience. The 1080p/30fps graphical update is new but unless you’re paying very close attention and running the original side by side this still very much looks like a last generation game. Not to say that it looks bad, because the art style used holds up very well, but if you were expecting to be blown away with upgraded visuals you’ll walk away sorely disappointed. For those of you who play this on the PS4 you’ll get the added perk of your controller talking to you every once in a while but I’m not sure if that qualifies as anything ground breaking.

Dishonored tells the story of Corvo Attano, a man unfairly stripped of his honour as the Lord Protector of the Empress Jessamine Kaldwin. He has been framed for the Empress’ murder and embarks on a quest to rescue her daughter and avenge his wrongdoing. Over the course of the game Corvo gains access to many powers and abilities. These abilities allow players to approach the game in any fashion they prefer whether it be stealth or action and combat. Everything from teleporting to posession of people (fish and rats too!) to bending time, you have a wealth of options in which to attack each mission. If combat is your style, Corvo’s selection of weapons and attacks are equally as handy although the game tends to lean towards the stealth side of things on the whole.

“Nothing has really changed from that original 2012 version in this version here. You are getting the same game fully and completely that Arkane released with that promise of a bit more shine and polish.”

Nothing has really changed from that original 2012 version in this version here. You are getting the same game fully and completely that Arkane released with that promise of a bit more shine and polish. Sadly though, even that polish gets muddied when you get up close to a lot of items, NPCs etc in the game. Part of this of course is due to the watercolor paint art style used but for what’s being touted as an upgrade it really doesn’t feel like it. Again, as mentioned before, the game looked great in 2012 and still looks great now but I’m not sure how much more polish can be added to a game with this style.

One of the things that stuck out to me when it was first released and stands out just as much to me now is the cast and voice work. It’s a revolving door of notable talent from Michael Madsen, to Susan Sarandon and Chloe Grace Moretz. Great voice work goes a long way in selling a story, creating a connection and pulling a player into a game world. Arkane does this masterfully by not scrimping on their actors as I imagine this talent didn’t come cheap. 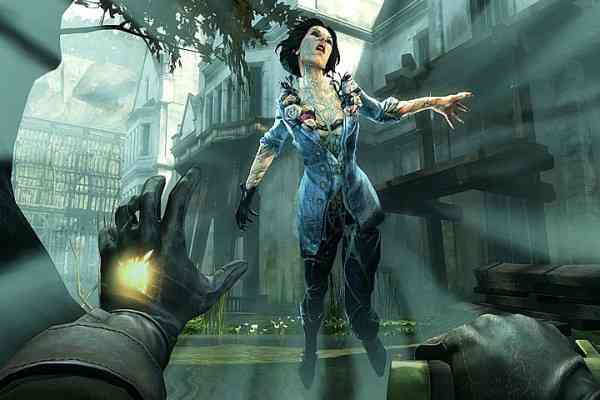 I find it hard to review these re-releases when it comes right down to it. When I covered Tomb Raider: Definitive Edition I asked the question do you base your score on how the improvements alone stack up or take in the game as a whole regardless of the fact it was released already? At the time I chose the latter saying that hey, the game is great even if we have already played it. Two years and a plethora of re-releases and definitive editions later I find myself starting to skew the other direction. Yes, Dishonored was – is – a great game but did it really warrant a re-release for anything more than sucking extra cash out of consumers? In the end the game does still stack up as one of the greatest stealth action games of last generation but unless you missed it the first time around there is absolutely no reason to look at it now. That being said, if you passed up this gem in 2012 you can’t go wrong with jumping into it now.

Nothing new to offer
Graphics update nothing notable

Next Clash Review – Lack of Replay & Limiting Gameplay Choices Hamper a Good Looking Game
Previous Trine 3: The Artifacts of Power Review – Please Sir, Can I Have Some More?