I really had no idea what Clash for the Xbox One was all about when I was handed this title to review. I watched the trailer to get a feel for what I could expect and my initial impression was that it looked like a title made in vein of many side-scrolling brawlers like Super Mario Smash Bros. At first glance it seemed to be a game that I could easily sit down to play with the family perhaps, or hop online to duel with some friends. So, with that in mind, I sat down, grabbed my controller and played.

I was surprised to find out that there is no online multiplayer in Clash and that the game has entirely been made for local multiplayer only, which is a huge mistake given how ingrained online multiplayer has become on current-gen consoles. Don’t get me wrong, couch combat (being in the same room as one another) is a good thing, as nothing beats smack talking someone in the same room, but you don’t always have that friend who happens to be over at your house. On top of that, the game isn’t even playable in a single player mode against AI, which had me calling on my newest co-op partner, my 9-year-old son. 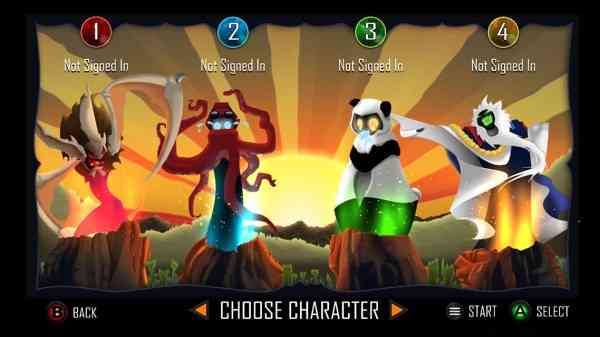 At the start of the game we are able to select from 4 different characters, which are basically just differed skinned characters that provide no tactical advantage. They don’t even have distinctive moves for the characters to perform. There is a Panda, Squid, Arachnid and maybe a Monkey (I honestly couldn’t tell what it was). Once you pick your character you can select your level, which also happens to be the game mode selection. You can choose from Atlantis/Team Deathmatch, Necropolis/Deathmatch, Kibo’s Throne/King of the Hill and Island of Spirits/Crystal Hunt, but there is no way to mix and match the levels and game modes, which in my opinion is one of the games greater weaknesses.

Starting in no particular order with Deathmatch, it was clear that the controls of the game are simple and quite intuitive. Running, jumping, attacking, using your shield and taunting can all be achieved with the press of one button making it easy for players of all experience levels to have some fun without having to master much of a learning curve. Timing your moves to bring out your shield to block or performing counter attacks is especially important to get an edge on your opponent. Play the game smart and you just might come up on top in this button mashing frenzy where getting the target number of kills will win the round.

I also think that with the simplistic approach to characters, levels and some game mode choices have hampered the game and limited the replay value of the title as well.

The controls don’t change from mode to mode; however, the objectives vary. Team Deathmatch is obviously team vs. team and King of the Hill involves controlling a point on the map to score. Finally, Crystal Hunt has you killing opponents to trigger a crystal drop that you then have to transport to a specific scoring area to win a point, kind of like Capture the Flag.

If you like playing around with gameplay customization, Clash allows you to modify the physics of the game such as jump height, dash length, cool down, block and gravity. The physics options can be cranked down to 10% of normal or all the way up to 400% more than normal, which can make for some fairly interesting combinations. One of my favorites was having the dash cool down and jump height as low as it can go, but have the dash length all the way cranked up. This makes it so you have to time your attacks perfectly to get across the map. On top of the physics options you can also customize the number of points it takes to win a match and the orientation of the level maps to change the difficulty.

Clash is a great game to look at with hand painted levels, characters, backgrounds and a vibrant landscape to battle on. I especially liked the little touches that were thrown in like water bubbles or glowing plants in the background that added something extra to liven them up. Sadly though the game only boasts four levels to play on and even though these take you from the depths of Atlantis to the top of the trees on the Island of Spirits, this small variety is disappointing. The developers definitely did some quality work, but really how hard could it have been to throw in a bit more variety? 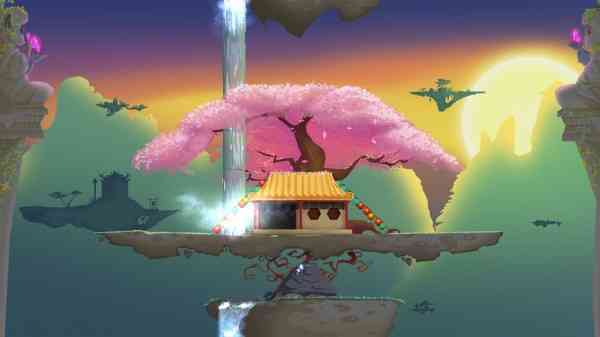 In terms of the games audio, the music and sound has been fine-tuned for each level and does a good job enhancing the game experience. While fighting you are surrounded by the sound of your combat efforts, from blistering attacks to shield wielding defenses.The biggest compliment I can give the music is that I would download it to my video game playlist if it was an option, which, unfortunately it doesn’t seem to be at this point.

There is some good to Clash with its great art style, impeccable soundtrack and a cool way to change up how the game is played by altering the many of the games physics, but while it has a local multiplayer option an online multiplayer component would have been more exciting. I also think that with the simplistic approach to characters, levels and some game mode choices have hampered the game and limited the replay value of the title as well. Some DLC or a patch might bring this game up from average, but unless you play a lot of couch co-op with friends or family you might want to wait to see if anything is upgraded down the road.