Transpose Review – A Mind-Boggler Unlike Any Other in VR

Not long into Transpose comes a level in which you must pass a cube across a chasm. To do so, you have to make use of both your past and future selves. First, you record yourself retrieving the cube and throwing it to where the future you will be, then respawn at the destination as the future you, technically now the present you, to catch the cube and complete the pass. This simple exercise showcases the brilliant complexity of Transpose, in which each puzzle requires you to work with yourself across time. But the downside of such complexity is that it also presents a punishing degree of difficulty for the player. Though it is without a doubt a puzzle game unlike anything else currently on VR, Transpose may be as likely to alienate as it may captivate.

The objective is deceptively straightforward: all you have to do in each level is bring a cube of energy to the endpoint, which in turn powers up a portal to unlock the next level. However, accomplishing this task is an entirely differently story. You’ll have to do some platforming and manipulate the environment, gravity, and time itself.

As a being of energy, simulating the cycle of creation and destruction of the universe, time is no stranger to you. You have the ability to clone yourself, creating what is known as “echoes”. Every time you step off the beginning spawn pad, all your actions become recorded. The next time you respawn, you’ll see your echoes moving about the environment as ghosts, carrying out actions in the past, allowing you to bypass obstacles in the present time. Picture the 2007 movie Next, with the many copies of Nicholas Cage being onscreen at once.

Transpose’s puzzles make great use of this novel gameplay concept. While the initial levels simply consists of platforms of differing elevations, the latter levels take on impossible shapes. One level that completely stumped me is set within a giant cube. I had to figure out how to use gravity to my advantage, and travel to each of the six sides of the cube to collect the pieces of the solution. By making gravity and time tangible elements the player can exploit, Transpose forces you to approach its puzzles with a whole new mindset. Think harder, the game begs of you. The surrealness of such strange mechanics was almost incomprehensible at first. Even towards the end, my mind still had trouble grasping the full extent of my abilities because Transpose is that different. On more than one occasion, I’d realize the solution after plenty of trial-and-error and go, “Wow, I can do that?” It stands as a testament to the strength of Transpose’s design.

While the core loop of recording echoes has no shortage of surprises, it does have its share of annoyances. A lot of playtime is spent waiting for your echoes to carry out their actions so your present self can continue. You have the power to fast-forward time, which makes the wait easier. But when you’re on your fifth or sixth echo, you’ll still be doing a considerable amount of standing around waiting for the past to catch up. This issue is made worse if you make a mistake somewhere along the chain of echoes. There is no easy fix to this. You will have to physically go back, watch each echo play out, figure out where the mistake lies, and make a new recording in its place. Often times, this mistake is as minor as not throwing a cube far enough. The worst offenders were the sections that required absolutely perfect timing between all your echoes, which can be so frustrating that they made me want to throw in the towel. 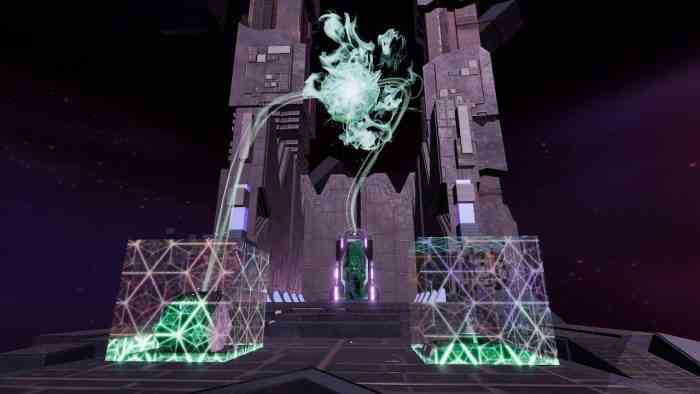 I don’t think I’ve ever had to say this about any game before, but Transpose seems to put too much trust in the intelligence of the player. Helpful hints are far and few, and are almost nonexistent by the second half of the game, which is where the hardest puzzles are found. Non-player-recorded echoes guide you toward crucial points of interest, but they also don’t appear enough. Most hints pop up during the loading screens in the form of cryptic sentences such as “each death is a lesson,” but even they offer little in terms of real help. I got stuck more than I can count over my journey in Transpose. There were times when I had to spend minutes peeking around the starting platform, trying to spot the energy cube and determine where I’m supposed to go first. Certain puzzles can be infuriatingly obtuse, to say the least. Without more available assistance, I can see many other players running into these same walls.

Transpose is by no means perfect, but it’s unique take on physics puzzles is compelling, not to mention a great fit for the VR platform. Manipulating time and gravity never loses its charm, and the reward of watching all your past echoes work together in the end is equal parts bizarre and incredibly satisfying. Puzzle fans should find plenty to love here though unless you have the IQ of a genius you will likely get stuck on a puzzle sooner or later and find yourself shouting profanities into the void. 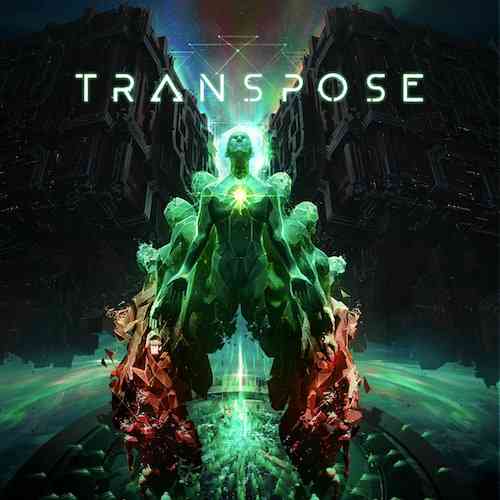