The Heavy Fire franchise has lain dormant for a few years but a change of developers has brought a new entry in the form of Heavy Fire: Red Shadow. In this entry, you hop behind a serious mounted machine gun and fight off the incessant attacks of North Korea. While there’s lots of fun to be had mowing down wave after wave after wave of men (read in Zap Brannigan’s voice), the length of each stage makes the gameplay pretty redundant, the storyline doesn’t make any sense, and quite frankly, it is uncomfortably patriotic. All in all, the franchise probably should have stayed dormant.

As the storyline goes, the Korean peninsula puts its differences aside and the two countries of North and South Korea are reunited. Once that happens, the Americans are forced out and the North begins to build nukes again. Somewhere in there, the South Koreans appear to lose any and all say in what happens as the North and the Americans begin to wage war on each other – even though it’s supposed to be a reunited country. Anyway, as the gunner in an insanely powerful mounted machine gun, it’s your patriotic duty to slaughter each and every solider that comes across your gun sights in several key battle stages that are primary battlegrounds … or something like that … they never really explain where you are.

The gameplay is fairly self explanatory; there’s the mounted gun, you have 360 degrees in which to defend, and the waves come from everywhere and consist of men with a variety of weapons, including suicide bombers, and armed vehicles. To help you defend yourself, there are a number of ways for the armed forces to back you up. The more you kill, the more XP you gain, which allows you to call in supply drops, air strikes, ground forces, artillery shells, or even a chopper to help you keep your fortified position strong. The XP also translates into perks, like upping your choppers’ guns to rockets, or not having the need to reload your machine gun – all things to help you ward off the ever-growing waves of North Koreans.

While there’s fun to be had in Heavy Fire: Red Shadow, each stage takes roughly a half hour to clear, so you can imagine how long it takes before the wanton violence and destruction becomes a bit repetitive. There’s also the fact that you can level up so quickly, it’s almost ridiculous. Within the first stage, I no longer needed to reload my gun, which meant I could just hold the trigger down forever. By the second, my machine gun was doing double damage and I was getting dropped double rockets. Suffice it to say, the game was a little bit too easy. 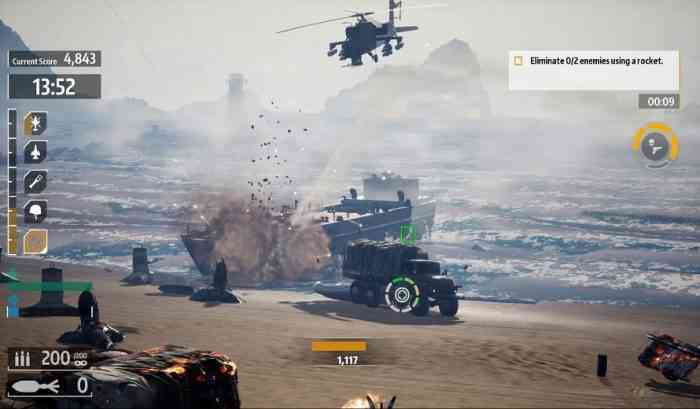 You Have Been Recruited

All of which kind of reminded me of ‘The Last Starfighter‘ from the 1980s. The game isn’t very long, the storyline is nonsensical, and you’re far too overpowered. Once you finish though, you unlock endless mode, which is exactly what it sounds like. Add in the fact that this game is VR friendly, and I couldn’t help but feel like if I survived enough waves, I was going to unlock an invite to join the Special Forces. The game is ridiculously over the top in its patriotic stance, paints your enemies in near WWII propaganda levels of exaggeration, and puts you in scenarios that make little sense in connection to what’s happening in the game – but look oddly like American battlefields around the world. So you’ll forgive me if I draw reference to a video game designed to draw in the best pilot for a real world combat mission.

All in all, Heavy Fire: Red Shadow is a game that is easy to overlook and doesn’t really give you much reason not to. There’s fun to be had and it’s an easy way to waste a half hour, but that’s really all you’ll be doing. With repetitive gameplay, a strange storyline, and a tone that oddly feels more like a recruitment video than anything else, Heavy Fire seems like it probably should have stayed dormant. Seriously though, if it does unlock a special invite to join the military, someone please let me know!

Blizzard Will Launch Crossplay Into Overwatch ‘Soon’
Next Achtung! Cthulhu Tactics Review – Squandered Potential
Previous Transpose Review – A Mind-Boggler Unlike Any Other in VR