ToeJam & Earl: Back in the Groove Review – Old Time Grooving

ToeJam & Earl: Back in the Groove Review

At one time Sega pimped ET rappers – the funky, groovy duo of ToeJam and Earl – as mascots for their Genesis console. However poor sales of the original 1991 game nixed that and that mantle fell to the decidedly more kinetic Sonic and Crash Bandicoot. Enter ToeJam & Earl: Back in the Groove!

Series creator – Greg Johnson – takes his fourth kick at the can with this iteration of the series, the first one made without any involvement by Sega. Getting the groove back for this franchise was not an easy birth. Game funding came from a 2015 crowdfunding campaign that met the target goal but failed to reach a stretch goal where the game would be released on consoles. In 2017, just when the game was scheduled to be released, the Adult Swim channel stepped in and provided the additional funding to allow console gamers the opportunity to experience the game. It took the three-man team two more years to attain console readiness. Interestingly, Adult Swim dropped out of the picture and is no longer be publishing the game. HumaNature Studios is self-publishing digitally. Diehards can pick up physical copies for the PS4 and Switch from Limited Run Games.

For a game with such a long and twisting nature, one would expect a game that pushes the ToeJam and Earl franchise in new directions. But it doesn’t. Whether that is a good or bad thing is up to the player to decide. The game plays most like the very first game, ToeJam and Earl on the Sega Genesis. Players not familiar with the franchise but have played any of the Pikmin games will experience a strong sense of deja vu.

Getting back in the groove figures literally for this game. As with the original, ToeJam and Earl crash their spaceship, the Rapp Master Rocketship, on earth due to some ill-advised button pushing. Ten ship parts are scattered throughout the twenty-five randomly generated levels and must be retrieved before the bopping duo can leave. The game employs a three-quarter overhead isometric view. The levels represent a variety of earth environments presented in tabletop islands floating either above a background starfield or surrounded by water. Players must navigate the levels and avoid being caught by the inhabitants while searching for parts. 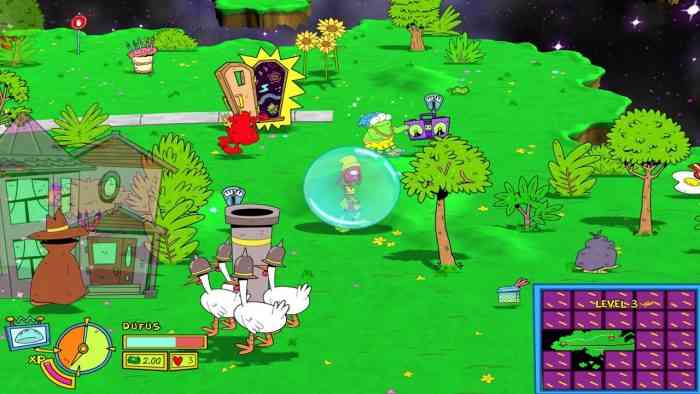 There are nine different characters – ToeJam, Earl, girlfriends Latasha and Lawanda, and three unlockable characters. ToeJam and Earl can also be played in their old school representations for purists. Each character has different attributes of health, speed, and other skills that require players to adjust their play style accordingly. In addition, the game supports multiplayer split screen playing for two or four players locally as well as online. While the game hews mostly to the original it does include the “Jam Out” minigame from the very different ToeJam and Earl in Panic on Funkotron game.

So what’s the verdict for this game? In one word – FUN! It’s a casual laid back type of game that possesses tons of character. And characters. As you play you’ll come across many colorful – both in terms of personality and design – NPC characters. My personal favorite is a Gandhi type character who spreads peace and love. The hip-hop funky aesthetics of the game crossed with Dr. Suess visuals make for a chilling, laid back experience whether you play it solo or cooperatively.