For me personally, when Titanfall was released back in March I was hooked.  The new entry into the FPS genre from former Infinity Ward staffers working for developer Respawn caught me by surprise in such a way that I couldn’t stop playing.  Sure, I am not the best gamer out there, but being able to hold my own in a world where jetpacks and parkour are an important part of the game was, and still is, fun.  With 15 maps out of the box I found that I got lots of gameplay out of the online only game.  That being said, with the lack of modes I found myself wanting something to make the game a little fresh.  Well low and behold the first map pack, called Expedition, is available in the Xbox LIVE Store.  With three new environments for fans to explore while shooting up those who go against them it was time to get my Titanfall on again.

One of the first maps I played was War Games.  During the lead up to the DLC’s official launch this map intrigued me given it was supposed to be a virtual simulation of previous maps melded together and it was set to be a training exercise of sorts.  As I played it’s a map that I found myself drawn to as my time with the DLC went on. 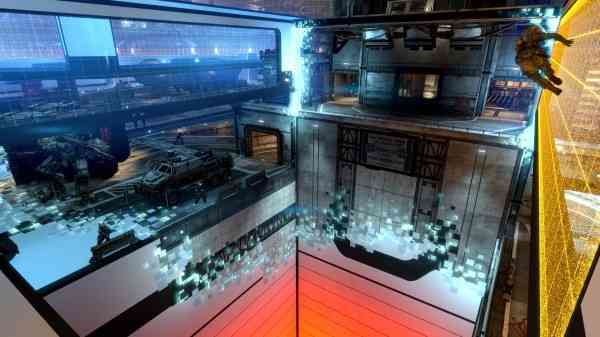 You don’t start with the usual dropship entry; instead you are put into a simulation-pod.  When you first step inside it states what level pilot you are, then the game “initializes” the training sequence where the mode begins.  Once you start exploring your surroundings you get the feeling something unusual is going on.  With a meld of different and existing maps, new areas to explore, and some very “Tron-like” grid visuals, you realize that this is definitely not your usual Titanfall looking level.  Heck, should you meet your demise, you’ll disintegrate given it’s all a virtual simulation.  All game modes seem to play quite well here.  My first experience was Last Titan Standing and teams were able to coordinate some good tactical maneuvers, from darting back and forth to and from cover spots to flanking enemies.  Once I got a chance to play CTF or Attrition, the level design and visuals became more prevalent.  From the two large orange and blue translucent parallel walls in the middle of the level that allow for some great wall running to the clean and very computer-designed areas that didn’t seem to be totally finished downloading their aesthetic look, it all melds together well.  Running and gunning is key and using the traditional assault weapons is a plus.  I came across a sniper or two, but being that there is a lot of cover in the map you can stay hidden from those who prefer to fight from afar.  War Games is a great addition to the line-up of maps that already exist.

The next map that I played, and another one that have found I like a lot, is Swampland.  As you look at any poster or box art for the Expedition DLC, including that which we here at COG use, it seems that the environment of Swampland was the focus of the marketing.  I have to say that after playing it I can kind of see why. 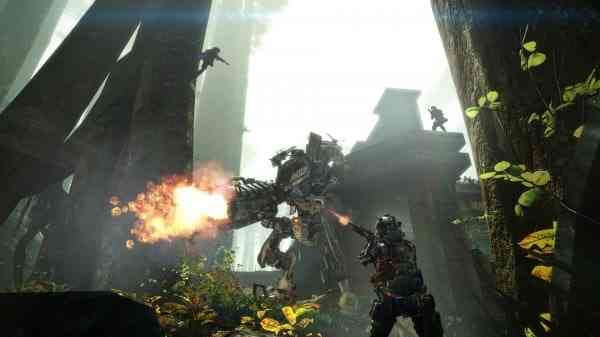 Swampland is a large level that will take quite a bit of exploration to get a handle on.  I felt very lost during numerous matches in the beginning, and there are still times that I find myself trying to get my bearings strait, so to speak.  What is very evident is the level of verticality that this map presents.  There are tall trees throughout, and a few with some platforms for you to perch on.  This will allow snipers to enjoy some success.  The trees also provide a way for the expert jumper to make their way across the level from above.  Those who wish can also hang from the trees and take a pot shot or two at enemies below.  Titan fans can get some satisfaction from this level too as the ground level, and as some higher rocky terrain, allows for some epic Titan versus Titan battles.  There are a few open areas or corridors for those who wish to use powered up Titan Weapons from a distance (e.g. Arc Cannon or 40mm Gun).  As would be expected in such a diverse level, fans of all game modes will find Swampland is entertaining no matter what you play, just be prepared to explore a lot in order to find your best path for success.  I found that Hardpoint could get pretty crazy in some areas, particularly at point “A”.  Visually, Swampland is a treat from the industrial platform on one end, the ancient ruins in the forest, to the trees themselves, it’s a pretty good-looking map overall.

The final map of the three offered is Rundown.  Out of the three this was my least favourite one, but it doesn’t mean that I didn’t like it.  I know that a bunch of my online friends views of this map were mixed too, but in the end I didn’t mind it at all. 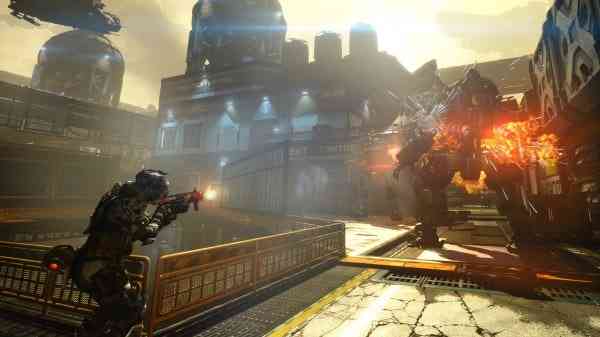 If you look at the surroundings in Runoff you’ll see that this map is a water treatment plant of some sort.  The level is basically rectangular in shape, but long, and there are lots of areas for you, as a pilot, to run around, in, or through.  There is even a zip line or two for you to ride should you want.  It is a multi-tiered level in such that there is a lower level (the canal like areas) where Titans are free to roam back and forth, while the main level is a little more crowded and has access to other rooms or buildings, and overall it’s a little tight for Titan warfare.  There are buildings and walls that allow for some enjoyable wall running too and it allows for some harrowing escapes now and then.  I found that the most fun I had here was CTF.  While I am far from a CTF guru, the paths that can be taken, especially when supported by your teammates, can add a sense of satisfaction.  Visually the level seems to fit in with the first batch of maps found in the game, particularly those with city like areas.  It’s not too original looking, but in the end Runoff plays fairly well.

Overall the Expedition DLC for Titanfall is solid add-on for the game.  With three very different maps Respawn has shown that they take pride in their level design.  Even my least favourite of the three, Runoff, still has the ability for some enjoyable moments.  This is a great start to the Season Pass of DLC and Titanfall fans would be silly not to add these maps into the game.  Although some modes play better in certain maps, the gameplay modes that are available to date do mix well in all three.  Now if Respawn could hurry up and give me even more gameplay modes dammit.