Mobile games with touch-based control have absolutely exploded in the past few years. At the same time, we’ve seen the rise of the ‘casual game’ which are experiences meant to be consumed in bite-sized portions. One glance at the iTunes App Store or Google Play makes it obvious that mobile games are big business in 2012. PC gaming has also seen a resurgence as of late, and many developers are looking to hit both markets with single titles. Tiny Troopers was originally an iOS title, but has recently made it’s way onto the desktop. I went to war with the PC/Mac version and came away feeling indifferent about many aspects of the game.

The game is composed of multiple short, stand alone missions in which your team of soldiers works to complete straight forward tasks such as wiping out enemy forces or destroying strategic locations. A short text blurb outlining mission objectives precedes each mission, but there is no storyline linking missions together. Completing missions and objectives earns points that can be used before missions to purchase temporary mission specialists like grenadiers or power ups like increased armor and rate of fire. Additionally, medals can be found occasionally during missions, and allow access to training packs that permanently boost the stats of your team. Soldiers also gain experience and improved stats over time, but are generally lacking any sort of personality. 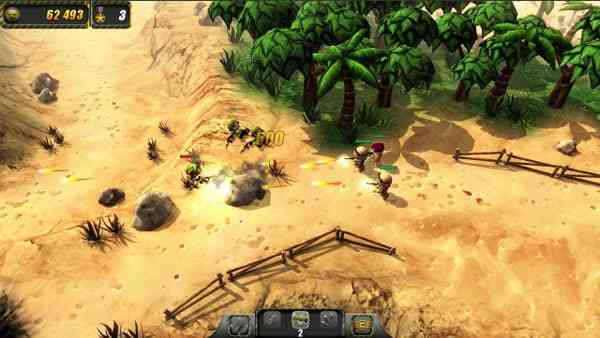 Tiny Troopers plays somewhat like a top down shooter, but controls more like a real time strategy game. Unfortunately, it doesn’t do either of these things particularly well in the PC version.  Having played and reasonably enjoyed the iOS version, I was interested to see how the control scheme in Tiny Troopers would transfer over to the mouse and keyboard. Sadly, the abundance of available keyboard space is not utilized, and the game offers a very limited number of schemes that cannot be modified. The mouse is used to direct your ‘squad’ around the map, and I say ‘squad’ because they can only be moved as a unit – severely limiting your strategic options. Left clicks move the squad to a point, and right clicks cause the squad to fire at your pointer. Since you must continuously tell the squad to fire, it makes it quite difficult to move and fire. Special weapons like grenades and rockets are selected first by clicking them in the HUD, and then toggled by holding the control key. It seems to me that being able to assign a few buttons to simply activate special weapons would make more sense and simplify things. I think the most sensible scheme (besides touch, which works well on iOS) would be a dual stick shooter type setup. If this game ever shows up on XBLA and PSN, it would be borderline criminal to not include such a setup.

The camera sits at a static ¾ angle above the action, similar to most real time strategy games. For the most part this works well enough, but I often found myself being attacked by enemies I couldn’t see. Because your team is incapable of firing without your input, there were a few times that snipers or tanks mowed down half my team before I even found where the fire was coming from. That brings me to another thing – team members killed in battle are permanently toast. Your supply of soldiers is refilled after skirmishes with inexperienced green recruits who have significantly lower stats than the people you lost. This can make later stages quite difficult, but I usually had enough points racked up to make up for this with upgrades and specialists. 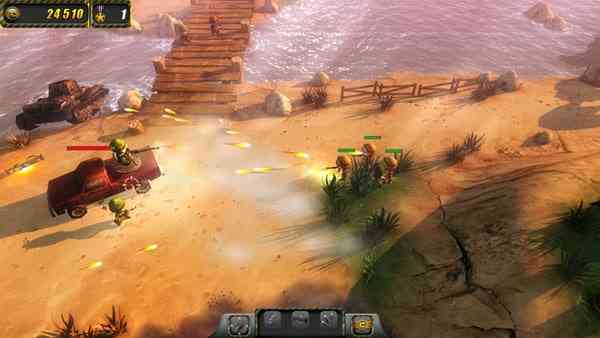 Enemy AI is hit and miss. At times they’ll intelligently attack you from multiple sides, but more often than not, you’re able to lead them into an ambush. For example, running into the middle of an enemy camp and then running away to hide behind a cliff catches the attention of all the bad guys, and you can mow them down easily as they round the corner of the cliff. In all honesty, this game is meant to be played casually, so I didn’t expect all that much on the AI front.

The aesthetic of Tiny Troopers is somewhere between Animal Crossing and the Worms franchise. The quality of the characters, scenery and effects is solid, and the game definitely has its own unique art style. The sound is good but unremarkable, utilizing fairly standard effects and music. Characters all have Alvin and the Chipmunks voices, which adds to the element of cuteness the visuals bring. Despite the ‘cutesy’ quality the game carries, it has moments that are somewhat graphic. Defeated enemies bleed out, and occasionally they’ll beg for their lives before giving up the ghost. Again, although the fidelity is good, it seems obvious that the game belongs on mobile platforms when looking at it.

The real problem I have with Tiny Troopers is that it is meant to be played casually such as when you are waiting for the bus, waiting for a friend, etc.  The experience just doesn’t translate well to the desktop format. Like most casual games it’s fairly mindless and repetitive, which is perfect in 10-15 minute chunks, but playing any longer turns it into a chore. The mechanics of the game are hindered greatly by the PC interface and the bite-sized nature doesn’t suit the PC environment. If you are looking for a strategy game on PC I would highly recommend saving the $10 you would spend on Tiny Troopers and put it towards one of the other excellent RTS games out there.