Serious Sam is a series that doesn’t try to conform and be something it isn’t.  You won’t find Sam ducking behind cover from enemy fire or stealthily backstabbing a monster from behind.  You also won’t find him working with a squad, barking commands for suppression fire as he and his team attempt to capture a checkpoint.  Sam is the kind of guy that you hand a rocket launcher, point in the general direction of the bad guy and watch the bloody fireworks. That’s because Serious Sam: BFE, the prequel to SS: The First Encounter, is intended as a throwback to the classic first person shooters that jump started the genre.

Before there was Call of Duty, Battlefield and Halo; there was Doom, Duke Nukem and Quake, the fathers of destructive weapons and lightning fast, arena styled anarchy.  These were games that banked on the idea of huge deadly arsenals, hordes of blood thirsty enemies and never ending action…and Serious Sam is no different.  So the question that begs asking is whether the time of old FPS games has passed or if there’s still some juice left in the ol’ tank. After all, we evolved from the endless grind of monster slaughter to a more civilized, slower paced form a combat that taxes not only your reflexes, but your ability to strategize, position yourself and work as a team.  Not to mention the upgrade in realism and the addition of more complicated weapons and gear that can be modified and refitted to suit a players individual play style. 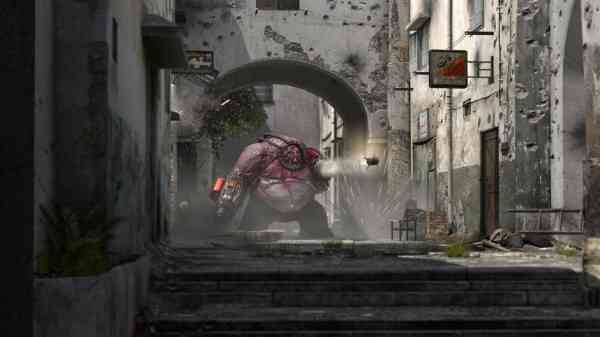 Is there room for both forms of the genre? Or have developers left the bloodied corpse of the age old shooter behind for good reason. The guys over at Croteam seem to think otherwise, and in the holiday season of 2011, launched Serious Sam: BFE on the PC to a bevy of positive reviews from the press; and in the process proving that classic first person shooters are still desirable and relevant.  Now, less then a year later and at the request of die hard fans, Sam “Serious” Stone has returned once more, guns loaded, in a ported version of the game on Xbox Live Arcade.

Right off the bat, it’s pretty obvious that the game is a port.  The options in the settings are more numerous then you’d expect to find in a common console shooter.  You can toggle the FPS (frames per second) on and off , change the color of blood, disable the gore, toggle the auto aim and auto equip, change the crosshair, switch your player model, etc etc etc…there’s a lot to tweak, which is usually more akin to a PC game then an Xbox title. Also, the graphics have suffered in the transition.  The textures on the environment and character models are noticeably lower resolution, and it wasn’t unusual to experience laggy texture loading during cut scenes and occasionally during gameplay.  However, the optimized graphics are most likely a necessary evil to maintain a constant FPS needed to enjoy consistent smooth gameplay on a static platform.

At the start of the single player playthrough, Sam is accompanying his team on a helicopter ride, headed for a museum containing important information crucial to the war effort.  Sam and company trade some blunt flaky banter about hookers and drugs when the chopper is suddenly attacked by a Major Biomechanoid, which in turn flings Sam, who’s not wearing his seat belt (for shame), out of the helicopter and into the buildings below.  Being the badass that he is, he survives the fall and so starts his adventure. Lets be honest though, no one plays Serious Sam for it’s predictable story full of campy one liners and cliché plot points.  It’s just tacked on to move you along to the good parts, like kicking ass and taking names…and in that regard, mission accomplished.  The action you experience during encounters is unparalleled when it comes to intense, over the top battles.  Serious Sam: BFE is what Doom or Quake might have evolved into had they continued to be developed.  My only complaint about the gameplay is the feeling of redundancy I experienced after long play sessions. The constant stream of enemies spawning at every step can make for an overwhelming pace. 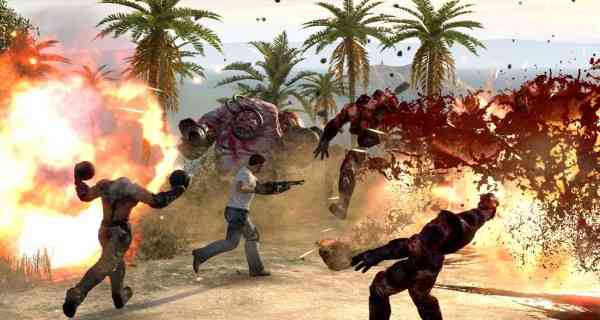 However, the game plays it smart enough to start you off slow, Sam’s first deadly weapon acquired being a sledgehammer; and unlike the previous games where every map is wide and open, SS:BFE throws in some smaller, narrower areas for Sam to explore, where combat becomes more challenging due to limited space. The maps themselves, both the small and larger areas, aren’t all that creative or intuitive.  There’s a lot of buildings you can dive into for loot, health and cover; but each map is squared off like giant arenas, which is great for maneuvering during massive battles, but leaves little to the imagination.

As for combat, you’ll first encounter enemies individually or in small groups, pairing the same enemy types together for easy management. After awhile though, as you encounter more and more creatures like Gnaars (one eyed gorilla?), Cloned Riflemen, Kleer Skeletons and the infamous Headless Kamikazes, you’ll begin to notice mobs growing larger and larger with wave after wave of various enemy types attacking you all at once.  I’ll admit, when I’m in the middle of taking down a Major Biomechanoid and a flock of Scythian Witch-Harpies simultaneously, the sound of mind-numbing screeching inching ever closer from headless suicide bombers never fails to send me running in the opposite direction for dear life, and more then once I had to pause the game and catch my breath after an insanely intense battle.

Fortunately, Sam is not without a myriad of deadly weapons to help him fight off Mental’s massive slave army, and each weapon discovered will prove more devastating then the last.  At first, like I mentioned earlier, you’ll start off with a basic assortment of armaments like the sledge, pistols, shotguns and assault rifles.  As the body count starts to rise, you’ll find more powerful weapons like the dependable rocket launcher and the more powerful devastator, both explosive types useful for bringing down larger opponents.  Sniper rifles, ancient magical gauntlets, explosive charges; Sam’s got ’em all and you’ll need them all to survive the massive mobs.  The great thing about your arsenal in Serious Sam is the huge amount of ammo you can carry for each gun, and the fact that you never run out of space for more weapons; which is a lot less common in modern shooters. 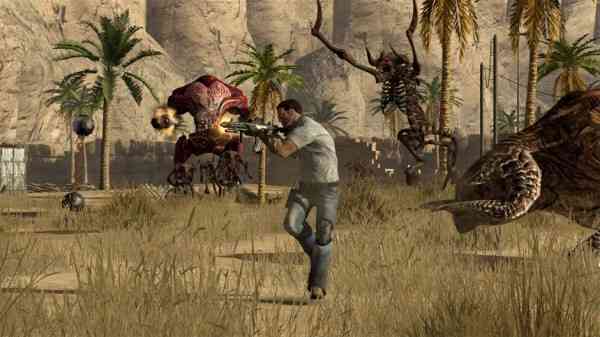 The game also takes advantage of Xbox live, with cooperative multiplayer that supports up to 4 players in a single session.  Not all the modes from the PC version are present, but you can play the entire campaign together, or opt for the survival mode instead, pitting you against an endless stream of monsters to see how long you and your mates can stay alive.  Standard and survival mode are also available in the single player and split screen multiplayer, so your covered even offline.  At the end of every level, in any game type, your given a score card tracking kills, saves, secrets found, time played and difficulty, adding up to an overall score that ranks you in the online leader boards, which is great for replayability and competing against friends.

Serious Sam: BFE is a game that does what it’s designed to do well and doesn’t pretend to be something else.  It won’t win any beauty pageants or appraisal for artistic ingenuity, and it probably won’t be marvelled at for it’s in depth story and character development; but if you crave that old fashioned, non-stop mayhem of an old school first person shooter, no one does it better and with more attitude then Serious Sam.  Uncle Duke would be proud.

***This review reflects the Single Player Campaign and Cooperative Mode of Serious Sam 3: BFE, and does not include Serious Sam 3 Jewel of the Nile and the Online Versus mode***