The Legend of Zelda: Tri Force Heroes Review – Three Links are Better than One

Even without thinking about it, many people buy into brand names. It’s practically human nature. When you have a good experience with something it’s only natural to build up trust for that thing. The Legend of Zelda is one such brand within the world of gaming. Those four words in that specific order ring like a bell through the ages of gaming that stretch all the way back to the early days of the NES. When you hear The Legend of Zelda, you know you’re in for a treat.

The Legend of Zelda: Tri Force Heroes is the latest entry into this iconic line of games, albeit a bit of a departure from the usual formula. Tri Force Heroes is a multiplayer co-op title that sets three ‘Links’ off on a grand adventure to save a princess’s stolen sense of fashion from an evil witch. Players must work together to solve puzzles and overcome challenges in each of the games 32 levels. Seasoned Zelda players may notice a strong resemblance in this title to one that appeared on the GameCube. Unlike Four Swords Adventure, which could be played co-operatively or competitively, Tri Force Heroes forces co-operation through a shared health pool, and enemies or obstacles that need all hands on deck. 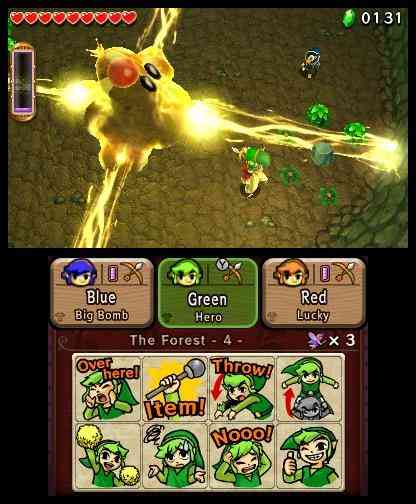 Running, Slashing, Shooting, Throwing, Swimming, and Hooking (to wooden posts of course, get your mind out of the gutter) are all still present. After all, this is Zelda. The uniqueness doesn’t come from what has been changed; rather it comes from what has been added. As is obvious, a three player game needs three player mechanics. The ‘totem pole’ is one of the key tools to your success in Tri Force Heroes. Players stack up to make themselves taller, the bottom player in the stack controlling movement, and the player on top commanding actions such as attacking or using special items. Players in a stack can be thrown across chasms or up ledges to reach new places that wouldn’t normally be accessible. Working in a group of three is your greatest strength, but it can also be your greatest weakness.

The puzzles in Tri Force Heroes never border on the absurdly difficult. They need to be solvable within reason for a team of three that has no way to communicate outside of colorful emotes. As is the case with each and every online based game, you are only a strong as your weakest ‘Link’ (bah-dum-bah). Some groups will run more smoothly than others, and that’s going to depend entirely on how hard your teammates want to screw with you. Of course, as I stated earlier, your team shares a life pool, so messing with each other isn’t advised. It still happens though….a lot. For a game that isn’t designed to be competitive in nature, it’s amusing and almost downright hilarious watching other players create competition out of nothing. The game itself is also playable solo using two artificial players known as ‘dopples’. You’ll switch back and forth between green, red, and blue Link manually. While doable, the game shines more brightly during multiplayer sessions, with the puzzles themselves being more seamlessly overcome when you have more than one mind on the matter.

“Nintendo has once again managed to take a series that we all know and love, tell us that they’re going to do something unthinkable to its formula, and somehow have us walk away not hating it. “

If ever there was a way to make a fashion hungry witch give up the ghost and relinquish her spoils back to the victim she robbed…I would probably say it’s to dress up as a Goron, Tingle, and one of the Ice Climbers. I mean…it’s basically science. One of the core elements featured in Tri Force Heroes is your ability to play dress-up. I say this tongue and cheek, but these costumes you create come with some interesting and very helpful side effects. Costumes are crafted using materials gathered during your adventures. These materials are gathered in one of three ways. Firstly, at the end of each mission your efforts yield three treasure chests. Each player may choose one, but only one will contain a rare material. The other two players will be left with common supplies. The second way to collect material is a shop in town where many materials needed to craft these suits are available, but at the cost of rupees. And lastly, there is a treasure chest game in town that gives you a one-in-four chance at materials every day. It’s free, but you could also end up with nothing. Such is gambling!

Something that remains a constant across nearly all Nintendo titles is solid artwork. One need only look at my review history to see that I rarely have much bad to say about first party developer visuals, because it’s true. Nintendo follows a philosophy that places good art-style over realism, which ultimately helps their titles age slower and feel more timeless. The same is true of Tri Force Heroes. If there was only one truth to be spoken about modern Zelda games is that they always come in one of two forms; normal or “Toon”. Tri Force Heroes falls into the Toon category and does so with all the big eyes and round face that come with it. The game runs incredibly smoothly both on and offline, which is very likely one of the reasons Tri Force Heroes feels so polished. 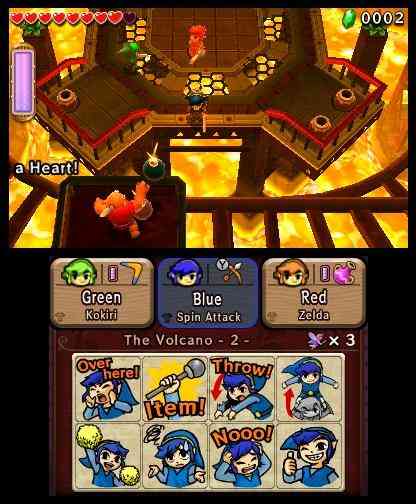 Being a spin-off within the Zelda universe, Tri Force Heroes spins just about everything on its head, the music included. Many of the tunes and sound bites will feel familiar but different. This time around, many fan favorites have a folksy twist to them. Acoustic string instruments and windwoods of all types rule the score. And as one would expect in a “toon” like Zelda game, Link has some appropriate grunts and groans as he, or your teammates, do their assigned duties.

Nintendo has once again managed to take a series that we all know and love, tell us that they’re going to do something unthinkable to its formula, and somehow have us walk away not hating it. At this point I’m convinced that there is some variety of black magic sorcery involved. Or maybe they have a team of invisible hypnotist-ninjas that visit us in our sleep and fill our minds using the power of suggestion. Speaking of suggestions, playing Tri Force heroes is one of the smartest things you can do as a 3DS owner right now. With or without friends the game is a blast. If this is the first of other Zelda themed spin-offs that manage to keep the spirit of Zelda alive, then I’m jazzed to see what else Nintendo can cook up for us. 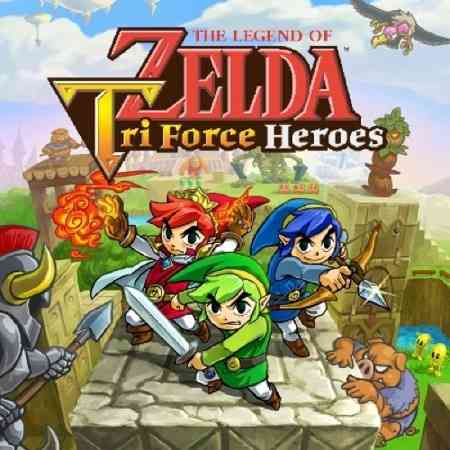