Oh man, my first Dragon Ball review. A touchstone that anyone who reviews video games looks forward to; until you remember the pedigree of Dragon Ball releases thus far and that is they haven’t exactly received amazing reviews. But that hasn’t stopped me from sinking an illegal amount of time into them. Myself and my brother played a ton of the Budokai series against the will of the universe and I beat that decent DS Origins game. I kind of love this dumb series and I hope against hope every time a game is announced that Namco Bandai will get their act together and help get an amazing game developed that does the property justice.

“Dragon Ball Z: Extreme Butoden is in an unfortunate position where the core game is kind of good, but everything surrounding it is kind of bad.”

For me, Extreme Butoden was the great hope. This was a fighting game (I love fighting games) being developed by Arc System Works (I love BlazBlue) for the 3DS. There was so much potential for things to go right here. Arc System carries a certain clout in the fighting game community; specifically, they make really good anime fighting games. Of course this isn’t their first shot at a DBZ fighting game, but those other two were less traditional fighting games and they’re also ten years old. Way before Arc honed their craft and cut their teeth on their recent games. That’s probably enough of a history lesson, eh? Let’s talk about this new title.

As a fighting game Dragon Ball Z: Extreme Butoden is actually interesting. The stuff surrounding that base fighting game is not. I’ll talk about that surrounding stuff first. It suffers from the same thing nearly every other DBZ game has suffered from in the past, which is that they’re obliged to include a story mode that rehashes all those story beats you’ve heard a hundred-thousand times at this point. But they do it in such a boldly uninteresting way and that makes it somehow more offensive. They present a series of static images and chunks of dialogue that are supposed to lead into these epic battles but they’re so devoid of any real impact that they end up committing the worst sin in video gaming; they’re wastes of time.

They lock all of the fighters and assists behind their story and adventure modes so you’re required to endure them if you want to experience the full game. Which makes a certain amount of sense; you’ve built these modes and you want people to experience them. But when they feel like insults to my time, that builds a certain resentment in my soul. So okay, in addition to the story mode you’ve got an adventure mode that offers an original story but plays the same as the previous mode. The story here amounts to: “All the guys we defeated are back! Now we have to defeat them again! Let’s go!” Real talk, that’s almost a line Goku says verbatim in one of his dialogue boxes. It’s not a great mode.

But whatever! This is a fighting game, not a story mode game. And like I said, the fighting is actually done fairly well. It plays like a stripped back version of BlazBlue. You’ve got three attack buttons, a dodge, and a power-up, and as Arc System has become known for, these buttons can be combined in a bunch of weird ways to perform and activate a bunch of weird attacks and systems. There’s a fair amount of depth here and it avoids crawling up its own butt with systems that alienate the casual fan. The combat is snappy and impactful, and once gotten the hang of, comes as close as any game before it in recreating a true DBZ experience in a 2D format. Oh, and get this, it also has Marvel Vs. Capcom-style assists. Like 70 of them! And why the hell not? Let’s start getting a bit crazy with these games. It’s actually where a great deal of the game’s fan service comes from. Butoden equally mixes accessibility and depth in an act of unlikely alchemy that somehow works. 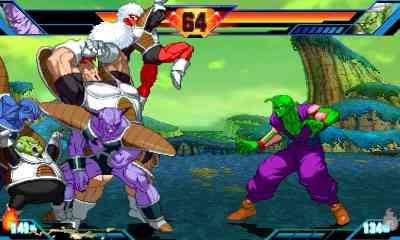 The sprites are gorgeous and some of the best I’ve seen on the platform. It makes the fights just as fun to watch as to play. The really nailed the look of the anime, and in some cases made it look even better. The characters are a bit more expressive than in the cartoon. It’s all quite impressive actually.

Dragon Ball Z: Extreme Butoden is in an unfortunate position where the core game is kind of good, but everything surrounding it is kind of bad. If you have a friend that’s as into fighting games and Dragon Ball as you are, I could see Butoden being a worthwhile purchase. But with the lack of online play and any satisfying single-player modes it’s hard to recommend to even the most diehard enthusiasts. 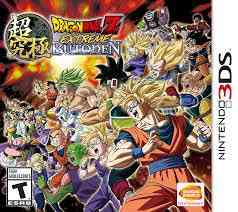