A game and series that has flown under the radar, The Incredible Adventure of Van Helsing III is the last chapter in the hack and slash trilogy from Neocore Games.  Coming in to the series at the last installment, I had several questions in mind: With the resurgence of isometric ARPGs, how does a relatively un-publicized game stack up against the likes of a Diablo or Path of Exile?  Is it one of those hidden gems?  Or will it be a just another footnote in the Annals of Gaming?

Set in a steampunk world, the story takes place in Borgovia after a civil war.  As Abraham Van Helsing himself, you are set on a quest to hunt down a former ally, “Prisoner 7”, whilst discovering the dark past about the aforementioned city.  Along the way you’ll deal with warring clans, criminals and a cult predicting “the End Times”.  You also learn the back story of your ghostly companion, Katarina.  The story starts out interesting but eventually gets too complex for its own good, starting to ramble.  The voice acting is fairly weak and you will find repeating voice overs along the way.  A bright spot, however, is its humorous writing and the banter between Katarina and our hero.  Call it cheesy, but the dialogue is certainly refreshing from the otherwise dreary atmosphere.  There are a few instances in the game where choosing dialogue responses are required but it doesn’t affect the overarching story, just access to certain side quests and rewards.  At the end of the day, Van Helsing III stretches itself too far with too many plot lines; I sometimes forgot I was hunting this “Prisoner 7” as he is neither imposing nor feels like a threat throughout the game. Overall, the story is very forgettable.  However, as many people say (myself NOT included, but that’s a debate for another article), hack and slash RPGs are about killing monsters and getting epic loot.

“A bright spot is its humorous writing and the banter between Katarina and our hero.  Call it cheesy, but the dialogue is certainly refreshing from the otherwise dreary atmosphere.”

In IAVH3 you can choose from six playable classes, a step up from three in the previous title.  Characters include the Umbralist, Constructor, Phlogistoneer, Elementalist, Proctector, and Bounty Hunter.  Each class is very distinct in how they play and feel.  For example, the Bounty Hunter can charge his primary attacks for extra damage and the Protector can raise his shield to prevent damage in an arc in front of him at the cost of mobility.  Neocore should be commended for how distinct each class is, encouraging you have to play each class with a different mindset.  Furthermore, it seems the classes were made for multiplayer, as the weaknesses of each class are also very prominent.  The only exception is the Umbralist, a solo player BEAST, who can speed through most enemies and down bosses in no time without even a scratch.  The skills of each class are interesting, some more imaginative than others, and you will find your character and specialize in the skills that you like.  The game can get confusing for beginners; there’s much to learn about the skill and powerup system, and the game tries to explain everything through journals.  If you don’t like reading, too bad.  On top of all the aspects of character management to learn (ugh, learning), there are crafting systems, enchanters, a war table, and pet chimera you can send out to find loot.  It can be a lot to take in, and people who have enjoyed games such as Path of Exile will appreciate the depth. 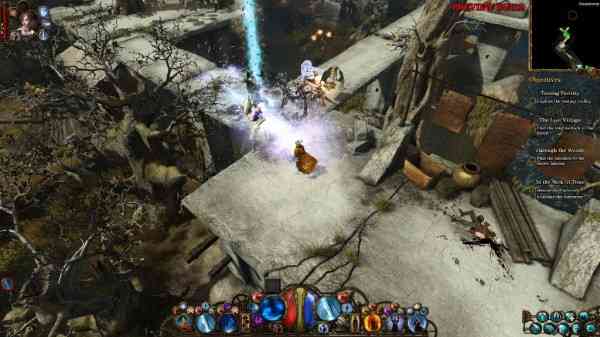 So what about killing monsters and finding loot?  Monsters are plentiful and a few do have some interesting mechanics.  You will be literally swarmed from all sides by enemies as it seems to be their only strategy.  You will most likely die in this game because of the swarming tactic not because the enemies are powerful, but the pathing in the game can be clunky.  Enemies will block your path even though it looks like there is room to walk around.  It seems like you are a giant block, while your enemies can stack on top of each other while swarming you.  Targeting can be a little imprecise on the smaller creatures, as not only do they move fast, their bodies also sway while walking.  Bosses are fairly… meh… nothing memorable.  Returning from previous titles is a tower defense mini-game, where you build defending structures and use your own character to thwart off waves and waves or respawning enemies.  It’s an interesting concept and really relies on your love of the tower defense genre.  The loot in the game is very basic, increasing the stats of your character with better loot.  In my time playing, I did not run in to any gear that was “build changing” or interesting.  So if you are looking for “epic loot”, then you may not find it here.

Apart from the regular story mode, there is a “Scenario” mode in which you can complete mini quests either solo or in co-op.  These quests include defeating a certain number of enemies in a time limit or finding a mini boss.  There are also certain restrictions that you can put on yourself for increase rewards, such as degenerating health.  The mode takes you back to already visited locations and can be considered your “end game” if you so desire.

“Neocore should be commended for how distinct each class is, encouraging you have to play each class with a different mindset.”

PVP arenas are present and support up to 8 players.  In my experience playing, most characters are playing Umbralists; the result is people one-shotting each other from the shadows.  It’s definitely not a balanced system and won’t hold your interest for too long.  There is also another competitive mode called “Touchdown”, in which 2 teams of 4 try to get a ball across the opposing team’s goal line.  I was unable to join any games as the player base is for this mode is non-existent, but I can imagine what this mode may be like (refer to Team Fortress mods).

The graphics are serviceable, a couple notches above Path of Exile, and few notches down Diablo 3; certainly nothing to write home about.  What is nice, however, is the level design.  Some levels have an almost over the shoulder perspective, giving a different POV of the action.  The environments do have their own personality and do look “lived in”.  Areas are fairly large, giving players much to explore and places to discover easter eggs, so keep an eye out for clickables. 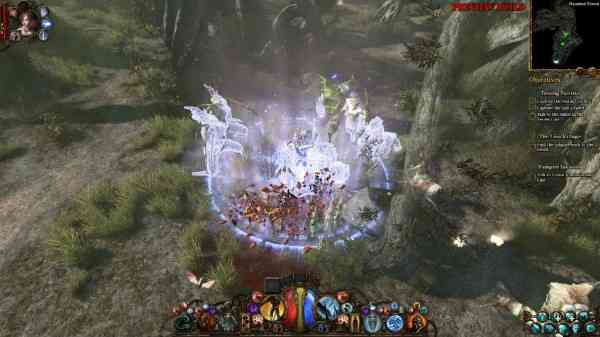 So, back to our original questions: how does a relatively unpublicized game stack up against the likes of a Diablo or Path of Exile?  Is it one of those hidden gems?  Or will it be a just another footnote in the Annals of Gaming? My answer: a footnote.  Van Helsing takes a bunch of ideas and mechanics from different games and tries to amalgamate them.  It doesn’t attempt to do anything original or push the boundaries of RPGs.  If this were the 90’s, I might be impressed.  Nothing sets this game apart; it strives to be a solid game, nothing more.  Unfortunately, ‘solid’ is just too flimsy to warrant a second playthrough.