“Hero” can mean different things to different people. Some people see soldiers fighting for their countries as heroes, police defending our streets, firefighters racing to emergencies. In “Not a Hero”, you work for an anthropomorphic rabbit from the future named Bunnylord, who says he wants to become the mayor of your city so he can prevent an upcoming disaster. A key part of his election strategy involves getting you to clean up the streets – in any way possible. But is it a noble task? Will you be a hero or a zero?

You play as various gun-toting hired hands, each with their own special abilities. There are nine characters in total that you gradually unlock as your employer’s approval rating improves. Some characters can reload faster than others, some can do quick take-down moves to dispatch the bad guys, and all seem to come with different weapons to fit their personalities. Bunnylord will be sending you on a variety of missions that will find you storming through building complexes and sometimes leaping from roof-top to roof-top in classic 2D side-scroller action, although you are also able to “take cover” behind items in the background.

There are usually some specific goals you have to complete to finish a level, plus optional ones to raise the approval rating higher. Whether it be “kill everyone in the level in a set amount of time”, or completing various fetch-quests, I found it rather addicting to try to complete everything before moving on. As long as you complete the main goals you can proceed deeper into the game, but you will unlock new characters slower. On the other hand, some of the later characters you unlock can help you with earlier levels and gaining those last few goals, so you can choose whichever path works for you.

“The best way to describe the look of the game is if the classic arcade game Elevator Action and new indie title BroForce got together and had a child.”

As you play enemies will drop weapon power-ups that have a number of uses attached to them. Most of the power-ups seem to come in the form of fancy bullets that can fire up through floors, ricochet around rooms and blast through multiple enemies. There are also some grenades, mines, and (my favorite) a bomb that involves a cat. One word of advice: don’t be on the same floor when it goes off!

The controls of the game feel a little too floaty for my liking. Often I would find myself sliding too far, or having issues trying to hide behind objects for cover. Running out of windows and floating down to the window below you is an interesting mechanic, and came in handy – but go too far and you will fall to your death. Maybe with a patch or two they could really tighten the controls up.

The game also doesn’t seem to support Steam Achievements, which is a little disappointing. Maybe the developers will add this in a future update. 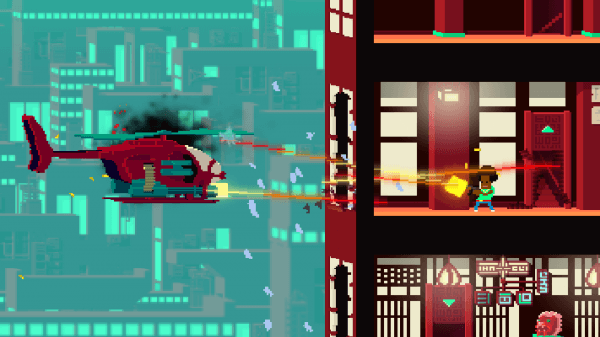 The best way to describe the look of the game is if the classic arcade game Elevator Action and new indie title BroForce got together and had a child. Graphics are in a blocky 2D look, similar also to Super Time Force, and it works well at the scale you play at. Any bigger and things would be a bit too blocky for the modern gamer. Don’t get me wrong, the game has tons of personality and had me chuckling at times at the visuals. Of course there is plenty of action and lots of pixelated blood spraying around (a la Hotline Miami), so the visuals are colourful and engaging. The buildings have different layouts, although I felt they could have benefitted from some more visual distinction between levels.

As you blast your way from one level to the next you will be treated to some awesome chiptune music from a range of musicians. It all fits perfectly and each level seems to have its own track. I just may have to look into finding the soundtrack to buy. I’m a sucker for a good soundtrack because it can really make or break a game. 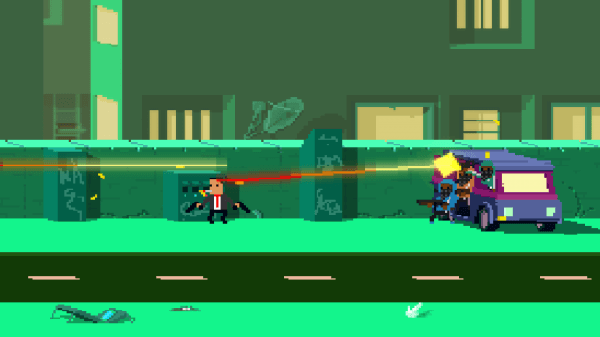 The rest of the audio is fine but one glaring thing that gets me every time is the Bunnylord’s voice. His voice is a cross between the grownups on a Charlie Brown cartoon and nails on a chalkboard. You have to listen to it as he explains what is happening in the upcoming mission and the debriefing after the mission. It’s such a shame because I want to read the subtitles as he speaks but the “voice” just grates on my nerves. What he says is often quite funny (although some of the humour falls flat), which makes it even more heart-breaking. There is no way to speed up the text shown on screen (and pre-empting Bunnylord’s voice) without skipping the scene entirely and starting the mission.

After the gun smoke cleared, and the last bullet casing hit the floor, I did enjoy most of my time with Not a Hero, but the sloppy controls and a few audio issues tempered my enjoyment. There is hope some of the issues will be ironed out in the future, but don’t let that hold you back from checking it out now and enjoying the great soundtrack that comes with it.

Next The Incredible Adventures of Van Helsing III Review – Abe’s Finale Doomed to ARPG Mediocrity
Previous Destiny: House of Wolves DLC Review – Still Looking for All That Extra Meat on the Bone