Destiny: House of Wolves DLC Review – Still Looking for All That Extra Meat on the Bone

Destiny has been an interesting journey. Many people love the game and continue to play it regularly, while others gave it a try and moved on. Seeing the split of people who have varying views is pretty telling. Bungie, and publisher Activision, promised an FPS like no other, and when released in September 2014 the reviews and opinions of this effort were all over the map. Regardless, the game sold well and was a hit. Destiny’s first DLC, The Dark Below, was released in December 2014 and gave fans of the series a new raid, 2 new strikes (one was PlayStation exclusive), some new maps for PvP, and of course new gear, weapons and items. Like the original game, this DLC was met with mixed reviews. Well, fast forward to present day and the next DLC for Destiny has been released. House of Wolves has been out for a week and we’ve played enough to give you our opinion of what we think. As one of the main Destiny players on our review crew, and tasked with writing this review, I have to say that although there is indeed some improvement, and there is some fun to be had, there is still a lot more sizzle and not enough steak.

One of the big additions is the new way to level up your gear, including gear you have, and new gear you find. This, in essence, is one of the more positive moves the DLC makes. During the Dark Below DLC you had to reset your exotics and level them up all over again. You also had to find DLC branded legendary gear that you may have already had in order to play with a higher spec’ed version of that item. In House of Wolves, if you have exotic gear levelled up to the max you simply use an exotic shard to bump it to the new top level. For legendary gear however, you’ll need something called Etheric Light. This can be found in Nightfalls, but they are as rare as exotics, so you’ll have to put in a lot of hours to find enough to boost your already leveled up legendary gear to the new max. That being said, levelling up weapons and armour is easier this time around, as the new gear you find in House of Wolves doesn’t have the need to grind for Ascendant or Radiant materials. People will enjoy this fact for sure and feel a bit more rewarded this time around. Props to Bungie here.

“…levelling up weapons and armour is easier this time around, as the new gear you find in House of Wolves doesn’t have the need to grind for Ascendant or Radiant materials. People will enjoy this fact for sure and feel a bit more rewarded this time around.”

House of Wolves offers up new story missions. If you played through the original story mode you might remember when arriving at The Reef how the Queen had a relationship with the Fallen. Well, The Fallen have betrayed her and killed some of her people. She has called upon the Guardians for help. You start off by hitting the new social space called the Vestian Outpost found on The Reef. Here you’ll be given a quick tour, disguised as a quest, to become familiar with what is there and where to go to cash in your bounties, pick up your postmaster packages, and do whatever else you need to do. From there you launch full into the “plot” of the story.

You hunt Draksis and his band of Fallen who have turned on the Queen. There are around 5 main chapters in the DLC story missions and you’ll find yourself playing for a couple of hours max to complete it. I found that the story was made somewhat better by the involvement of the Queen’s Emissary and a member of the Fallen who wants to see those who betrayed the Queen face the consequences for their actions. These two act as narrators during the adventure. 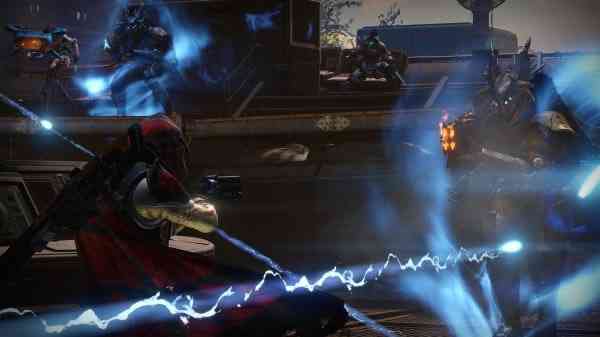 The story missions take place in familiar areas, even taking you to where Destiny began, outside the walls of the Cosmodrome. There are a few new areas that link to the old, but overall you’ll find yourself in areas that you clearly recognize most of the time. You’ll come across a few new baddies, such as some explosive or tracer shanks as well as some new enemy weapons, such as Scotch Cannons or mines that slow your movement down. My biggest disappointment is that the story missions exist in the areas that I have been exploring since Destiny released. The feeling of familiarity was disappointing as I sought something new. The fact that the story is not too deep, and I got through it with a couple of my online friends in a couple of hours, was also disappointing. I don’t know if Bungie is handcuffed to using the existing levels and in-game assets for telling a new story chapter, but if so, it doesn’t do much for people wanting some depth in this area.

You will also find a new cooperative strike called The Shadow Wolf in the new DLC. This strike isn’t any different than others you’ve played as it has you going through the level and eventually fighting a boss character. What I did enjoy about this strike is that it did seem a bit tougher, but maybe it’s the new coat of paint so to speak. The lead up to the final boss battle was pretty fun and playing with my online friends was somewhat enjoyable, so that is a plus. Like all strikes though, people eventually find their “strategy” and make their way through it on a regular basis with little to no trouble.

“For me, as a fan of Destiny, I can appreciate this new Prison of Elders mode; however, it is something that I feel I am already becoming tired of.”

There is no raid in House of Wolves. In its place is the new Prison of Elders, a three-player “horde” like mode. You and your teammates start in an airlock where there are four doors leading to four different areas. You must go through each door and fight three rounds of enemies. Some of these rounds may also have special objectives that must be completed during the wave (e.g. disarm/destroy mines, kill specific target). Special modifiers may also be implemented, such as your grenades cooling down faster or your shield having more health but it does not regenerate. After you complete all four rooms you face off with a boss. Once this is complete you head to a treasure room where there are two small chests and one big chest. The latter can only be opened with a special treasure key that you acquire by defeating House of the Wolves Fallen in patrols on the game’s various planets and randomly finding it in a reward chest. Even if you don’t have a key you can still play the mode and get some loot from the smaller chests. Prison of Elders is playable in four settings; 28, 32, 34, and 35, with better rewards the higher you go. Level 28 is the only level that allows public matchmaking.

For me, as a fan of Destiny, I can appreciate this new Prison of Elders mode; however, it is something that I feel I am already becoming tired of. There is not much variance in the gameplay, and the maps, although they come up in different order, are the same. It is something that really comes down to wash, rinse, and repeat. This mode definitely does not replace a raid. When either of the raids was first released it was a challenge to figure out how to get through each section and beating it with five other people was truly rewarding. With Prison of Elders, I just don’t get that feeling, and that is very disappointing. Plus, I have played enough “horde” like specific modes in other games and I am kind or getting tired of it. 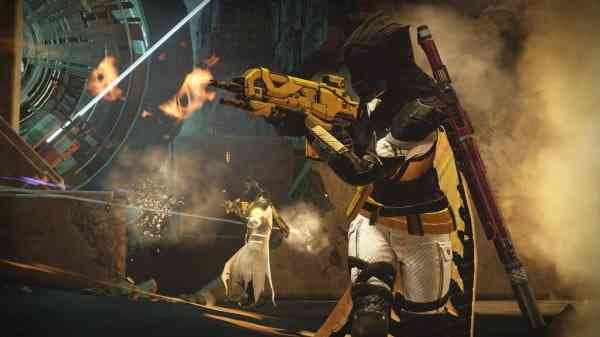 Along with the new three-player PvE comes a new three-player PvP called Trial of Osiris. This new adversarial mode is a 3v3 elimination game where only teammates can revive you when you die, and if all three of you give up the ghost the round is over. If no team dies then it’s a sudden death playoff where a control point shows up on the map and the first team to take over the control point wins the round. First team to 5 victories wins the match. Lose three matches and you must start again. To play this mode you MUST have a team of three people, as there is no matchmaking; level advantages are also enabled. You also need a Trials Passage which you can buy from Brother Vance for 100 glimmer. Trials of Osiris takes place every Friday to the following Tuesday reset.

Although it’s nice to have a new PvP mode I find that the limit of three players, and the shortened availability each week, hampers it. Having level advantages also discourages newbies to play. Finally, it occurs on one map only, which by the end of a couple of hours can get tiresome given it’s the same level match after match. There is no doubt that Bungie is answering the call for the truly competitive to have something of their own, but for a game that is need of some general freshness, even in the PvP area, it feels tacked on. I think if they rotated a few maps it would have given this new mode some much needed life. Limiting the time you can play also hurts more then helps

“Make no doubt about it, at the end of the day House of Wolves DLC is an improvement over The Dark Below DLC, but it could have been so much more.”

I think that Bungie’s approach to revealing the DLC piece by piece a week at a time prior to the release softened the blow of what many were hoping for: added content and change. In many ways the DLC recycles levels and enemies, and there isn’t nearly as much new content needed to continue to push the franchise forward. Sure, there are a couple of new modes, some new PvP maps, and new story missions, but the new modes are limiting and the new story missions are easily completed in a couple of hours. There still is the addictivenss though of finding all those new items and gear, and the more refined levelling up of most of these treasures is not such a grind.  Make no doubt about it, at the end of the day House of Wolves DLC is an improvement over The Dark Below DLC, but it could have been so much more.

Next Not a Hero Review – Addictive 2D Side-Scroller Featuring a Fabulous Soundtrack
Previous The Witcher 3: Wild Hunt Review – Much More Than Sex on a Unicorn