There is no question Shinji Mikami’s primary goal with “The Evil Within” was to scare the absolute bejeezus out of anyone who dared to pick up the game. To a large degree his team at Tango Gameworks have successfully managed to accomplish that goal. You will jump out of your chair, the hairs on the back of your neck will stand on end, your palms will get sweaty, you’ll close your eyes and there are a glut of ‘holy shit’ moments where you just know that grotesque looking butcher wielding a massive machete is going to slice you in half like a ripe watermelon. Despite nailing the fear factor, “The Evil Within” fails in a number of other areas and in the end it left me with the view that this old school horror game would have fared better some 5-10 years ago.

If you are considering “The Evil Within” for something innovative or genre bending, you won’t get it here. There is a sense of familiarity with almost every aspect of the game. Everything from the frustrating mini-cut scenes every time, and I mean EVERY TIME, you open a door to the horrendous melee combat where you are incessantly fighting the camera controls, “The Evil Within” contains many elements from previous classic horror games. Unfortunately many of these elements should have been left in the past or at least ironed out to make them a little more enjoyable.

Taking inspiration from such classics as Silent Hill and Resident Evil, “The Evil Within” does a nice job creating a creepy and intense nightmarish atmosphere. That feeling of hopelessness and desperation was an ongoing theme throughout. Just a like a good horror movie where all your instincts are telling you to turn around, “The Evil Within” forces you to push forward through some of the nastiest enemies you will see in a horror game. 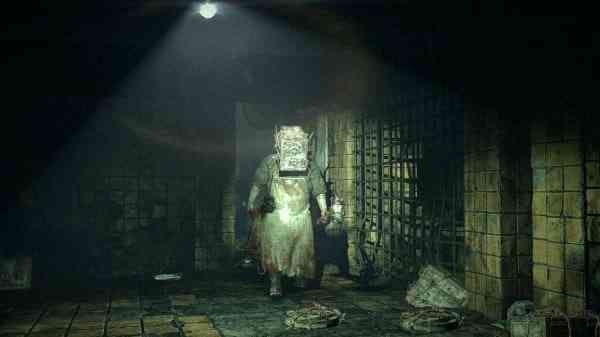 Right from the get go Detective Sebastian Castellanos (the games main protagonist) finds himself responding to an incident at the Beacon Mental Hospital with his partners. When they arrive on scene all the police cruisers and other emergency vehicles at the front of the cathedral-like hospital have been abandoned. Right away you know nothing good can come from heading into the hospital. So what do you do? Of course, you head right on in!

Soon after they crack the front doors they notice a grizzly scene with bodies strewn about the massive corridor. Sebastian and his partner soon come across one of the facility doctors who is looking scared beyond belief having seen something he clearly could not handle. Sebastian then wanders over to the hospital security cameras where he watches armed police officers shooting at an unseen enemy. Suddenly a hooded ghost figure flashes in view swiftly taking down all the officers. This figure then slowly looks up at the security camera right at Sebastian and suddenly appears right behind Sebastian, who then quickly blacks out.

After I changed my underwear, Sebastian wakes up hanging by his feet from the ceiling only to see a nasty looking mad butcher chopping up human corpses. After he gets himself down and navigates his way around the butcher, Sebastian realizes he is caught is some kind of mysterious world where creatures wander around like zombies and he is haunted by that ghostly hooded man. And so begins Sebastian’s journey to uncover the evil force that haunts him and the world he now sees himself in.

As far as the story is concerned, “The Evil Within” had plenty of potential but in the end the pace of the story left a little to be desired. I just found myself forgetting what was going on as nothing was explained for large chunks of gameplay. Likewise the character development was lacking considerably. I wanted to care about Sebastian and gain some kind of understanding for what makes him tick. I just didn’t get that, so I never really felt connected to the games storyline.

The 14-20 hour single player only campaign takes you through an outdoor abandoned farm, mental hospital, mansion, underground tunnels and villages. It is an intense journey where ammo is sparse and coming up with creative ways to take down the enemy is essential for your survival. You will use the games environments to your advantage as you lead enemies into trip wires, exploding barrels and other medieval booby traps. Of course there are other times where running for your life is necessary. Even set in the games easiest difficulty mode (casual) “The Evil Within” is not an easy game. There are no hubs, waypoints or other beacons to help navigate you through the games 15 chapters. You will die and die a lot, to the point it can become frustrating, tedious and a chore.

Much of that frustration rests with the lack of areas to save your game and checkpoints that are spaced too far apart. A few more checkpoints and a save system that saves your game as you go could have gone a long ways towards reducing some of those frustrations. Having to listen to the same enemies grunts and groans repeatedly; and watching the same cut scene over and over every time you die just cut into my overall enjoyment of the game. Needless to say, my advice to anyone who picks up the game is to visit Nurse Tatiana in the Asylum Hub frequently as you will want to save your game as much as possible. 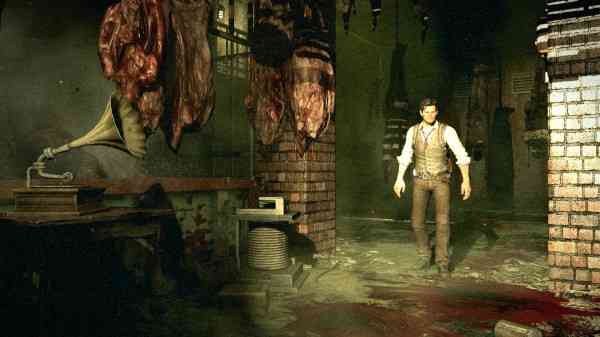 Combat in “The Evil Within” can be equally frustrating. For starters, don’t bother using melee combat – it’s mostly ineffective. Even after you have upgraded your melee abilities it still takes far too many blows to take down most creatures. Fortunately the weaponry in the game is decent with a Resident Evil-like aiming and control system. You can choose from a handgun (which often feels like a pellet gun), shotgun, sniper rifle and the most enjoyable of all the weapons the Agony Crossbow where you can load it up with exploding, freezing, electric and harpoon bows. You can also pick up axes and torches along the way that manage to kill most enemies with just one blow. Headshots with a shotgun are particularly memorable as you will witness some of the most gruesome gory scenes you will ever see in a video game; definitely not for the squeamish.

As you progress along you will upgrade Sebastian’s various abilities, his weapons and pretty much anything that makes him better equipped to take on hordes of creatures, including some of the most memorable bosses you will ever encounter. You will gain parts for your bow by diffusing traps, bombs and trip wires. Scooping up green gel gains you points to use towards upgrading your abilities. It is nothing incredibly innovative but it does force you to explore the levels which slows down an experience which otherwise should not have taken as long as it did.

While the boss battles themselves are a challenge, and will undoubtedly punish you, it is also during these sequences where some of the games deficiencies rear their ugly head. For instance, frantically trying to find an escape route while a giant Samara-like (from the movie The Ring) boss comes hurdling towards me was intense but equally frustrating. Sebastian must be a chronic chain smoker or living off one lung because the dude gets gassed easily. You will sprint 15 feet before he hunches over completely out of breath while a maniac with a chainsaw is right behind you. Likewise attempting to run away from the Boxman boss was also hampered by Sebatian’s lack of cardio. 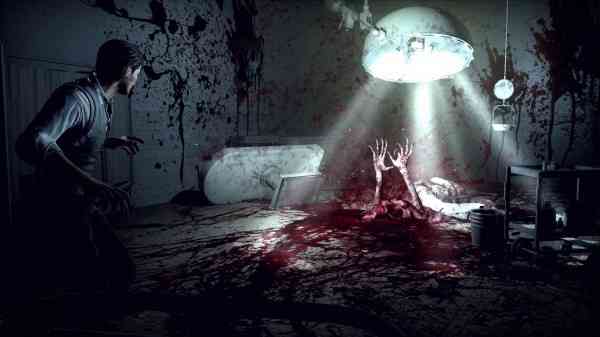 Visually, “The Evil Within” is not a bad looking game but it isn’t a great one either. It looks rather dated and something more last gen that current. Granted some of the daylight levels look sharp and the art design is impressive but some of the framerate issues and glitches hold it back from being considered one of the better looking next gen games. The audio is a repetitive mess. You will literally hear the same grunts and groans over and over and over. It’s flat out annoying. The voice work is decent but it is overshadowed by a mostly forgettable soundtrack.

“The Evil Within” should have been the best next generation horror game we have seen to date. Shinji Mikami has the pedigree, credentials and budget to make it happen. Unfortunately “The Evil Within” falls short and doesn’t come close to living up to its billing. Granted, it creates a nightmarish atmosphere and will whet anyone’s appetite for an excessive amount of blood and guts. I experienced many scares and might have even pooped my pants a bit. Yet in the end a lacklustre storyline, uninteresting characters, clunky combat and far too many frustrating sequences hold “The Evil Within” back from being considered one of the greats.

***This game was reviewed on the Xbox One*** 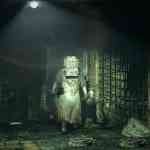 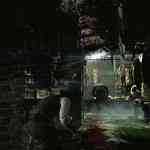 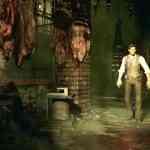 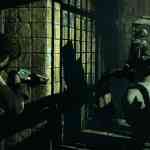 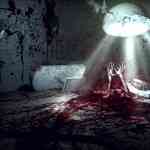 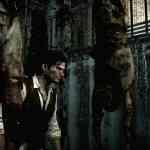