Hey, you. Yeah, you over there. You like to shoot virtual bad guys? Do you also like massive quantities of crazy loot? How about wacky characters and kaleidoscopic scenery? If you answered yes to any of the above, step right up, because you’ll probably enjoy Borderlands: The Pre-Sequel.

True to its name, The Pre-Sequel is set prior to the events of Borderlands 2. Prepare to grapple with your morals during the main quest line – Borderlands 2’s Handsome Jack plays a hero role here (hilariously, I might add). Together you’ll work to stop an evil empire from destroying Elpis – Pandora’s moon – with the help of exactly one boatload of zany characters. It provides interesting narrative as to how Jack became the scumbag villain of Borderlands 2, but it doesn’t feel particularly natural – you’re more of a spectator than the motivation for his metamorphosis. Presumably thanks to the influence of 2K Australia, pretty much everyone has a thick Crocodile Dundee accent, resulting in a few good chuckles if you’re familiar with Aussie slang at all. Even if you aren’t, you’ll probably laugh at the oddity of the dialogue. Some characters are more memorable than others, but you’ll certainly find at least a couple you appreciate having around. 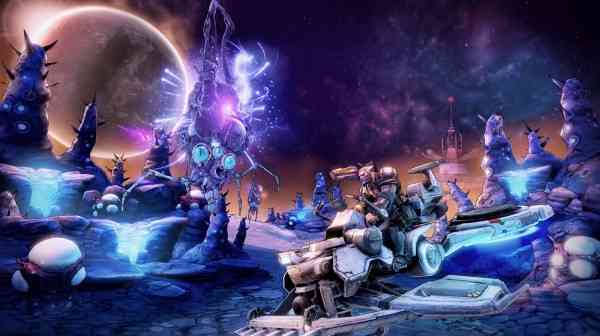 The main storyline is reasonably well realized, but the side quests are far more entertaining. In one area, Serenity’s Waste, an audio log triggered a series of last requests. The logs that follow are funny, flirt with breaking the fourth wall in the best sort of way, and have you track down an NPC specifically to call him a dick. It’s those sorts of moments that shine most brightly in an otherwise routine feeling mission structure.

Most missions follow a fairly standard formula, though the circumstances are infinitely more creative than this year’s other loot shooter, Destiny. Typically, you’ll need to complete a goal, but have to deal with being sidetracked a couple times by broken jump pads, locked doors, or evil twins. It’s predictable, but tolerable thanks to the writing – there’s some wonderfully weird commentary, lots of which comes from the player character.

There are 4 brand new classes to play in The Pre-Sequel. Wilhelm is a tank character, equipped with a pair of combat drones. Nisha is a gunslinger type character who utilizes a powerful slow-time, auto aim power. If you just can’t get enough Claptrap, you can play as him (it?) in a support role. Or, there’s Athena, who has a damage absorbing shield power. 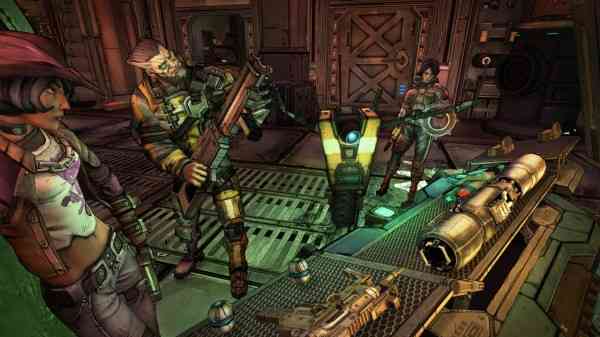 But the real reason people play these games is the loot. The Pre-Sequel definitely has loot. There’ll be loot coming out of your ears. Like previous games, there are boxes and bins full of stuff literally everywhere. Cash, guns, shields, class mods, and more can all be found in any container, from footlockers to garbage bins. You’ll feel compelled to clear out all the containers in an area almost to the point of obsession, because that one dumpster MIGHT have a sweet laser that shoots acid in it. Lasers are one of the new things in The Pre-Sequel, providing another class of guns to play around with, as if there weren’t enough guns already. The variety of weaponry is truly staggering in the game – you’ll rarely come across 2 guns that feel the same, and I really appreciate the way different manufacturers have different qualities. For the record, I tend towards the fast-firing Jakobs brand.

The way The Pre-Sequel plays has been tweaked substantially from previous games too. For starters, it’s set on a moon. A moon without an atmosphere and minimal gravity. Both of these things completely change how the game plays. Oxygen breathers are an equippable item, required to travel outside of air domes. Oxygen is a finite resource too, so some tactical planning is necessary – I’d often get part way to a destination and get ambushed by Kraggens (moon Scags), and end up scrambling to find a way to replenish my O2. Thankfully, bad guys frequently drop air canisters along with their usual loot, but Oxygen levels are certainly a consideration during play. Oxygen also plays into the low gravity mechanic, where you can use up some oxygen to glide at the height of a jump. That, along with super high jumps, makes for some interesting terrain traversal. It was often possible to get up high, take a running leap, and glide over an area I didn’t want to deal with.

When not gliding over top of it all, the action gets frantic in a real hurry. Encounters are rarely isolated, and it’s easy to get surrounded by enemies. That’s the perfect time to unleash the new ‘gravity slam’ ability. Anytime you’re airborne, the gravity slam is able to blast back enemies and cause big elemental damage – at the cost of Oxygen. At times, it’s the only feasible way of dealing with the swarm surrounding you. 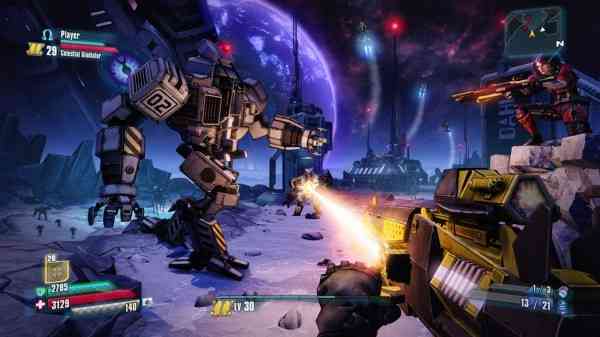 Visually, Elpis is a real treat. The moon manages to cover almost all the colours of the rainbow, complete with the requisite ice and lava areas. These do get mildly repetitive however, seeing as the setting is a moon, and you won’t likely find a dense forest. The cartoon style of the art has never looked better, with creative character designs and some really breathtaking vistas.

Unfortunately, I ran into lots of technical snags and rough edges during my play. It’s too easy to get stuck on some geometry or clip through walls. I was killed countless times by grenades or bullets coming through solid objects, and I cursed the heavens on occasion when a rare looking weapon fell out of a corpse, through the ground and down into oblivion. These glitches marred what was otherwise a blemish free technical experience.

While it doesn’t reinvent the wheel, Borderlands: The Pre-Sequel is tweaked sufficiently to warrant being its own entity. The oxygen, new classes, and gravity mechanics make gameplay feel fresh, while the story provides enough of a thread to tie things together. Sure, the missions and environments are repetitive and there are some technical hiccups, but The Pre-Sequel is fun to play, and well worth a look for fans of loot and/or shooting.

***This game was reviewed on PC via a STEAM code***

Borderlands: The Pre-Sequel is here and with it four new playable characters! They’re all charact… in Polls and Contests on LockerDome