The Disney Afternoon Collection Review – Wake Up and Smell the 90s

Wake up and smell the 90s everyone! This game collection covers the licensed games of the 4 cartoons I used to watch from 3pm to 5pm every day after Grade 2. But back in the day (and really, still most of the time today) licensed games are terrible, because they’re not developers’ passion projects, or they’re studio cash-ins with low budgets and quick deadlines. Well Capcom and Disney did something special during the late 80s to early 90s: they made incredible licensed games. I wrote one of my detailed Retro Review Series articles about DuckTales for the NES, but it goes over the history between Capcom and Disney during the gaming era of this collection, and all the games they brought out. Found here: Not only does this 6 game collection feature some of the best games for the original Nintendo, but it does so with lots of love, and a style that’ll make you wanna watch Saved By The Bell, and listen to New Kids On The Block.

The Disney Afternoon Collection includes the NES games DuckTales (1989), Chip ‘N Dale’s Rescue Rangers (1990), TaleSpin (1991), Darkwing Duck (1992), DuckTales 2 (1993), and Chip N’ Dale’s Rescue Rangers 2 (1993). The reason I presented these games chronologically is that from Darkwing Duck onward, these NES games were brought out after the release of the Super Nintendo, because of this they are all hidden gems. They didn’t sell much, and were overshadowed by any releases for the SNES. So for older gamers, who were around at the right time, it is still likely that you haven’t played these gems. And for retro game collectors like me, who have want to play them, it’s been difficult because they are all very expensive. A Darkwing Duck NES cartridge goes for around $80 online, DuckTales 2 costs around $250, and Rescue Ranger 2 costs around $400! The other three games can be bought for $20-$40, and are much more common.

DuckTales 1 and 2 are both A+ platformers. Scrooge can turn his cane into a pogo stick, and 90% of the time the player will be pogoing on everything. The level design is fantastic, and they can be played in any order, like in the Mega Man games. Both games have lots of secrets and are very well designed and balanced. DuckTales 2 is largely the same as 1, there are a couple tweaks, such as grapple hooking, and block dragging, and the graphics are a bit better, but largely it’s more of the same goodness from the original. The only complaint I have about 2, is that is just doesn’t seem as special as the first. I can’t even say why. Maybe it’s that I played and loved the first as a child, and the second game is actually just as good. Either way, they’re both phenomenal.

“All of these games have a “just right” difficulty. They’re not of the NES soul crushing variety.”

Chip ‘N Dale Rescue Rangers 1 and two are also excellent platformers. They can be played as 1 or 2 players, and heavily involve picking up and throwing mechanics. The levels are all very well designed, and like in the case of DuckTales, 2 is really just more of the same excellence from 1.

TaleSpin is very different from the other games in this collection; it’s not a platformer, it’s a shoot-em-up. It’s also not very good. You are the slowest plane in the history of shmups, and when your plane moves up or down, it fires on a diagonal. Baloo can also only fire one bullet at a time, so if the player stops moving, to fire at something in front of them, and the plane hasn’t straightened out, there’s a long wait time between the bullet going off screen, and the player’s ability to fire again. TaleSpin would be a difficult game if your plane was quick, and the controls were precise, but they’re not. It’s just not fun. 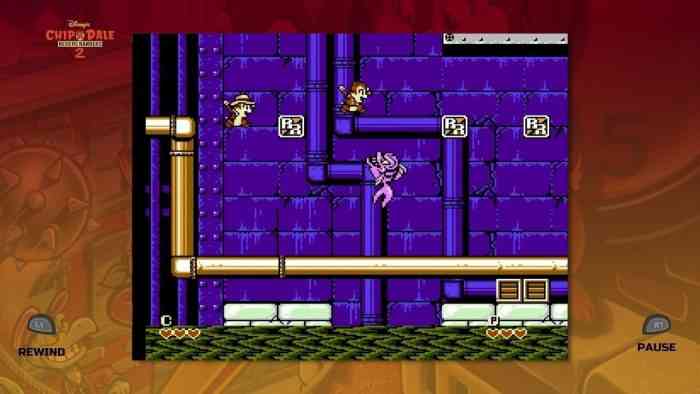 Thankfully Darkwing Duck is another gem of a platformer. Darkwing has a gun he can fire as much as he likes, right from the beginning of the game. The mechanic that sets this game apart from the other platformers is an emphasis on attaching to ceilings and grappling hooks. It’s another gorgeous game, and it allows players to choose the order of what levels they’d like to play, but this time in chunks, as opposed to the “everything from the start” approach of the DuckTales games.

All of these games have a “just right” difficulty. They’re not of the NES soul crushing variety, and they’re easier than the Mega Man games. But they’re not too easy either, and harder than the Super Mario NES games. They’ll be tougher than your average gamer is used to, but I beat DuckTales and Rescue Rangers as a child, so they can’t be that hard, right? They’re still pretty hard.

These games are all exact recreations of the NES originals. They have original graphics, music, and gameplay; the DuckTales Remaster from 2013 they are not, but that’s not a bad thing at all, just something worth noting. Each game does feature Time Attack and Boss Rush modes attached to their menu screens, before the game is entered. There is also a beautiful, detailed digital instruction booklet for each game called “How To Play”.

“These games are all exact recreations of the NES originals. They have original graphics, music, and gameplay.”

In-game, there are several fun features, which can easily be ignored if the player wants the full NES experience. The biggest one, is there is a Prince of Persia/ Braid-like rewind feature, which can be used by holding down the L1 button. This way players can retry missed jumps, and make-up for mistakes quickly, without having to restart from the beginning of a level. There is also a pause menu (accessed by pressing R1) which gives access to the How To Play guide, button configuration controls, and screen settings (I recommend getting rid of the ugly border they put around the screen and making it full frame). Finally there is also a subtle, yet awesome filter feature that allows the player to adjust the graphics, based on what kind of old TV they had/ played games on.

The menus for this set are incredible! They’re obviously trying to capture the look of the Disney Afternoon brackets put on the cartoons. They’re complete with minty pastel colors, sprinkles, triangles, cones, squiggles, and all other manner of geometric shapes. It’ll either give you the feeling like you’re in the supermarket birthday party section, or that Saved By The Bell, Full House, Fresh Prince Of Bel-Air, or Power Rangers are about to come on TV. 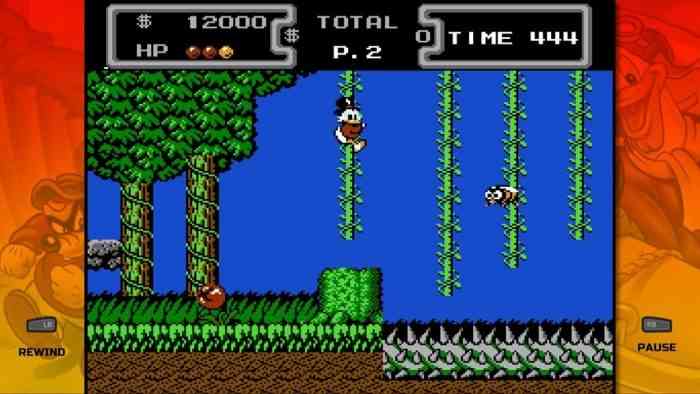 Right from the get go, full soundtracks are unlocked for each game. Listen to The Moon Stage from DuckTales, then make it your ringtone, like I did. There are also 4 art galleries showcasing pencil production art comparisons to game graphics, beautiful finished art from game boxes, magazines, etc., English language and Japanese language game boxes, and other random bits. All these extras are reminiscent of the excellent Mega Man Legacy Collection, and come together to create a fine package.

I’m the kind of retro game collector that buys game I loved when I was younger. I’m totally nostalgia driven. When I started my NES collection I put DuckTales and Rescue Rangers on a maybe 20 game short list that really only included the Super Mario games, The Legend Of Zelda games, the Castlevania games, the Ninja Turtles games, Final Fantasy, Dragon Warrior, and a few others. In this $20 collection you get 6 NES games, 2 of which are absolute classics, 3 of which are incredible hidden gems, and 1 which is a bit of a lemon. If you’re a fan of NES era platformers in any shape or form, pick up this lovingly put together package of Capcom/ Disney joy. 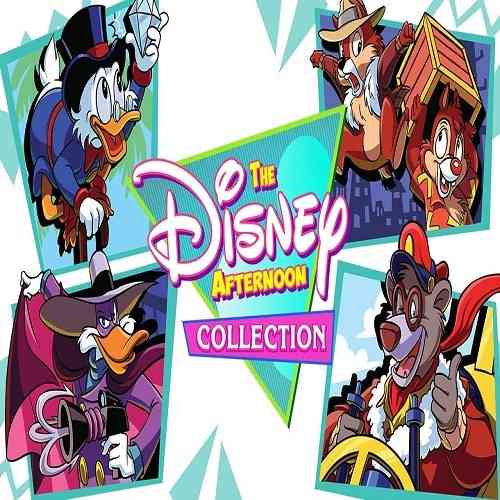