Terraria Review – Not Just a 2D Minecraft Clone, but a Good Game on Its Own

People’s first impressions of Terraria is that it is a 2D Minecraft clone, but this is far from the truth. Though it is similar, it really does stand on its own with a number of enjoyable features earning it more respect than I first gave it. Sure, the basics are pretty much the same, digging up stone and dirt searching for rare resources to build better equipment and fighting a range of different baddies; day turns to night and enemies grow in numbers and strength. However, there is more to it then just that, because somehow spending 10 hours + in a single sitting with Terraria is something that can happen more than once, without you even realizing it.

Being a 2D game, its graphics are quite simple but the simplicity does give way to massive environments that are fully explorable. These lands contain all sorts of surprises, even huge monsters that aren’t worth your time until you actually have some decent equipment. As such it’s recommended that you make a home for yourself. By doing so you’re able to create a bit of defense against creatures, and you can begin using your new home as a sort of Terraria HQ. Besides the added bonus of defense, your home also helps attract NPCs. These NPCs can offer goods that you’ll likely want to purchase, and with time you can eventually build a village of sorts. One of the main objectives of Terraria is to gain enough power from gathering, building and crafting so that you can ultimately defeat the boss situated closest to you. Once you’ve done this you gear up and continue on to the next one. Though simple this system works quite well and it keeps you trucking along while working on building up your character and your HQ. 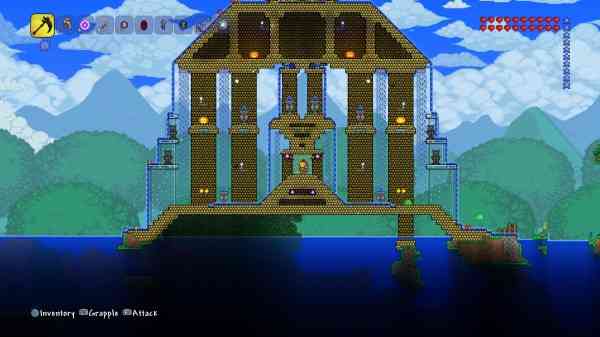 Controls in Terraria are easy to pick up. All in all your options are pretty basic in terms of mobility. Walking and running works the way you probably have already imagined, and digging and fighting is executed with simple button presses. Combat is straightforward as hacking and slashing monsters that attack you is handled in a fairly basic action combat system. The depth in the game comes from the deluge of items you can create and the structures that you can build. Given that the PS4 version has recently been released, all of the patches that have updated the PC version have come along with it. As a result loads of content is available. Upgrading your character becomes increasingly addictive as you get cooler equipment, like wings and awesome weaponry.  You’ll get that “want-to-play-a-little-more” feeling quite often as you try to get cooler and more powerful gear.

I was happy to see that when crafting items in Terraria everything is clearly displayed detailing exactly what you need to make an item. You’ll never run into any confusion as to how you can make an item or piece of equipment. Building a house with chopped wood is simple enough, and as is melting different ores to create deadly new swords. At some point your goal will be to gather enough gold to make gold equipment, which you need to surpass a certain level of depth into the world of Terraria. This is another concept borrowed from Minecraft, but I still like it nonetheless. 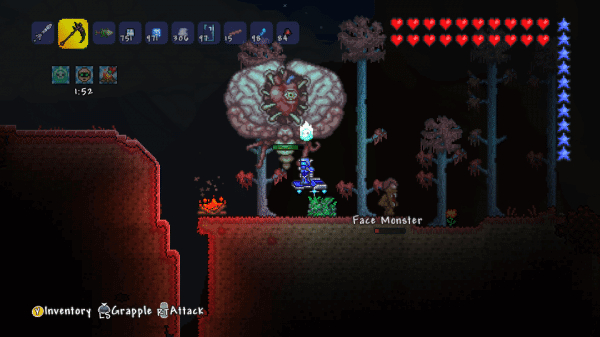 I do own Terraria on the PC and I can say that the PS4 version plays nearly identically. About the only difference I really noticed was that when generating a fresh world, the worlds were larger then the ones I found in the PC version of the game. The graphics look the same, just simple 2D sprites, nothing particularly fantastic in the visual department, but they have a certain charm that fits the gameplay. The touchpad on the Dualshock 4 can zoom the display, which was a nice little touch if you want to adjust how your interface fits for you.

Though I do enjoy playing Terraria, it is beginning to show its age, and not just because of the old school graphics style. In seeing it on the Vita, it seems perfectly at home with just the right amount of content and the style of gameplay suiting a handheld console. On a machine like the PS4, it feels like so much of the power available is just being ignored. If you have the PC version of Terraria, I wouldn’t jump on the PS4 instalment, but a handheld version could definitely be a nice addition to your library of games. That being said, if you haven’t played Terraria at all, the PS4 is a great place to pick it up. It offers a huge amount of bosses, items, and collectables, and couch co-op to boot. If you like Minecraft or anything of the sort, Terraria is definitely a game worth a look or two. 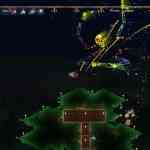 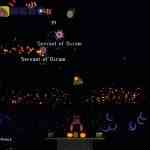 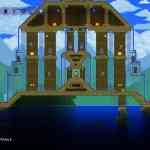 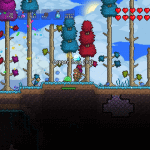 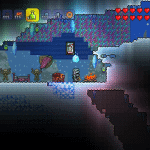 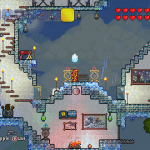 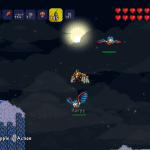 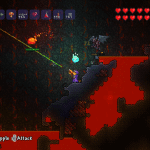 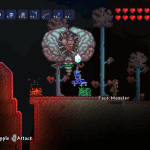