With the release of the PS Vita in 2012 here in North America, finding a game that truly shows its capabilities has been quite a struggle. Personally, there hasn’t been a game that’s made me feel like the PS Vita was completely worth my purchase. That is, until now. Media Molecule, creators of the innovative Little Big Planet, has swayed my heart yet again with the latest game, Tearaway. As their creations are known to be full of creativity and innovation I couldn’t resist getting my hands on their newest title. Not only was I thrilled to experience Tearaway’s peculiar world and delightful narrative, I was also ready to be part of it, literally. Will Tearaway make heads turn and finally show naysayers what the PS Vita is truly capable of? Let’s see, shall we?

The story begins with the voices of two people intrigued and excited by your presence. With the front-facing camera your face suddenly appears on the screen and phrases like “they’ve switched it on!” and “it’s a You!” are thrown around while selecting various settings for the game. Eventually you’re given a choice to control Atoi (the female) or Iota (the male counterpart) to be the trusty messenger throughout the game. Who you pick is entirely based on which is more to your liking, as gameplay isn’t affected.

As soon as you pick your trusty messenger your face appears in the sun and enemies called “scraps” come sprawling in from it to attack the messenger. It’s then your job to take care of those scraps and save the messenger. As you place your fingers on the rear touch panel they ‘tear’ into the digital world destroying the nasty scraps. When the scraps are alleliminated the messenger looks up at the sun in awe where your face is peering in catching their gaze. It’s now the messenger’s job to deliver the message, and their self, to you and for you to guide and protect them from danger. The goal: Get the messenger to the sun! 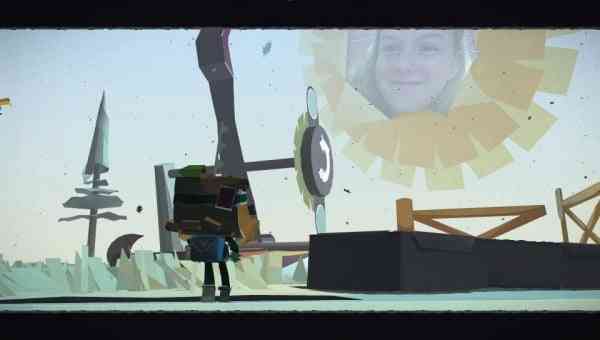 Just from this simple and charming introduction, a special bond is formed and I found that I wanted more than ever to have the messenger reach me. Even more so, my world, and the digital world the messenger lingered in, was intertwined and we needed each other. This interaction allows you to truly experience something unlike anything before. I was overwhelmed, overjoyed, entranced, and immediately sucked in. It was an adventure and world I never wanted to leave.

To make it even better, almost every function of the PS Vita is used. Both the front touch screen and back touch panel are used to interact with the paper craft environment. The front and back cameras are used to display your face in the in-game world or take pictures of in-game objects. The motion sensor is occasionally used to shake the world about and the microphone is used to give a voice or sounds to certain characters.

AI in the game is only implemented in the scraps that you battle and occasional gophers that run around in the world. That said, the scraps will usually just charge or shoot things at the messenger. No complicated or over-the-top events occur. Gophers on the other hand, well, they just walk around and wait for the messenger to pick them up. 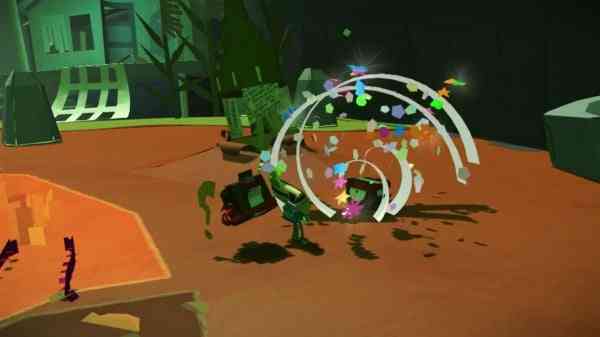 Even though there’s only a single player campaign mode there are more than enough activities to keep you busy. You will use various unlockable decorations such as eyes, mouths, and noses, to customize the messenger to your liking. Even cooler, you can make you own decorations to customize the messenger with. Take pictures of the messenger, surroundings, or even yourself, with the unlockable lenses and filters for you own pleasure or to unlock real-life paper crafts. To unlock specific decorations, lenses and filters, a certain amount of confetti must be collected. Confetti can be found throughout the messenger’s world by opening up presents and fulfilling specific character requests.

Another amusing feature of Tearaway is the ability to interact with the community via the game’s website www.tearaway.me. Just like lbp.me for Little Big Planet, Tearaway players can upload their own creations or view other player’s creations to inspire or be inspired by the amazing work done by others around the world. Also, all the real-life paper crafts collected in-game can be accessed through tearaway.me as well.

With plenty of activities to partake in, the game can take a good twelve hours if you’re aiming to ‘100% the game’. Having the capability to freely create and decorate the messenger, and even the world at times, can easily extend past twelve hours. Being able to create decorations gives the game quite a replay value, as the possibilities are endless. For those just planning to breeze through on the other hand, and play as quick as you can, you’re looking at around six hours. 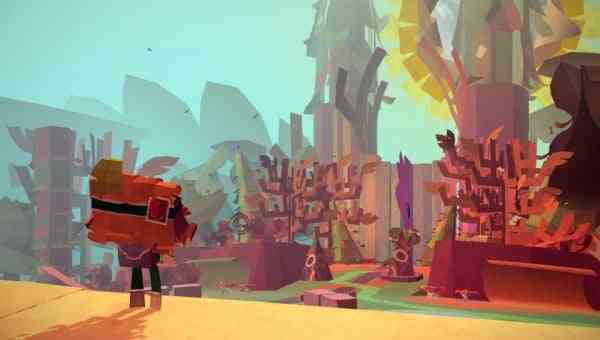 With a paper craft environment, Tearaway does a more than amazing job creating the animations of waterfalls, rivers, and crackling fires, as well as the movement of characters and enemies. From every jump to every gopher picked up, the animation is smooth and fluid and is far from choppy. Colours are vibrant and the black outlines make important things pop while the game’s lighting engine gives the sky life and truly makes the environment emit a warm and relaxing feeling. With the quirky level and character designs the graphics are sharp and crisp and one of the best I’ve seen on the PS Vita in my opinion. Everything blends in beautifully and stays consistent throughout the game. There wasn’t a moment that I felt a scene or area was neglected or not paid attention too.

In terms of sound, the soundtrack is enchanting and on par with the theme and atmosphere. It made the most unique and deepest of feelings arise which truly makes the game’s soundtrack one of a kind. It’s quirky, charming, and loveable, just like the visuals. The voice acting is mainly focused on the two narrators who do an extraordinary job when its their time to shine. The narration feels as if it was made specifically for you; genuine and real. The voices of Atoi and Iota, as well as various other characters in the game, speak a whole lot of gibberish; even so, it adds the wondrous and fun aspect to the game. The proverbial ‘cherry on top of the cake’ are the sound effects. Not only do they enhance every step you take, but they also bring the environment to life. Whether walking through a puddle or hearing birds chirp in the sky, the sound effects make the commonly unappreciated elements notable and grand.  Of course all is enhanced through a set of headphones.

With its innovative and creative aspects, Tearaway shows how the PS Vita can go beyond the mere touch screen and fully utilize its functions. Moreover, not only is Tearaway a quirky platformer, it’s an interactive world that players ‘tear’ into and are a part of. Whether it’s the story, visuals, or sounds, Tearaway has proven to be an extraordinary game indeed and is definitely a title PS Vita owners should consider picking up.