My relationship with Kinect 2.0 is off to a shaky start. You see a couple of weeks ago I was tasked with reviewing Ubisoft’s ‘The Fighter Within’. It was a terrible experience. An awful motion based fighting game that, dare I say, should have never been made. It left a horrible first impression with the Xbox One’s Kinect. Up until a few days ago, I avoided using the Xbox One’s Kinect functionality altogether. Sure I yelled “Xbox On” here and there; however, since that disastrous Fighter Within experience I was turned off by the whole ‘not so optional’ peripheral. In fact, I still remain a little puzzled why Microsoft insisted on bundling it up with every Xbox One.  But hey they can’t go back now.  Over the last few days I have come around a bit.  Ubisoft has redeemed themselves a little with Just Dance 2014 for the Xbox One. This motion based dance game is a lot of fun and shows us that maybe this Kinect 2.0 wasn’t a mistake after all.

Just Dance 2014 is not a technical powerhouse of a game. The visuals won’t impress you like say perhaps Dead Rising 3 or FIFA 14 may have. In fact, I am still not convinced Just Dance 2014 looks any better than Dance Central 3 for the Xbox 360. There is just something about the animations and overall look of the game that doesn’t look incredibly ecstatically pleasing. Some may disagree with me but in my view Just Dance 2014 is nothing special in the graphics department. Yet what it does have going for it is the fun factor and with the right group of people Just Dance 2014 is a blast. Even if you don’t have the ‘moves like Jagger’ you should be able to enjoy Just Dance 2014 for your shiny new Xbox One console. 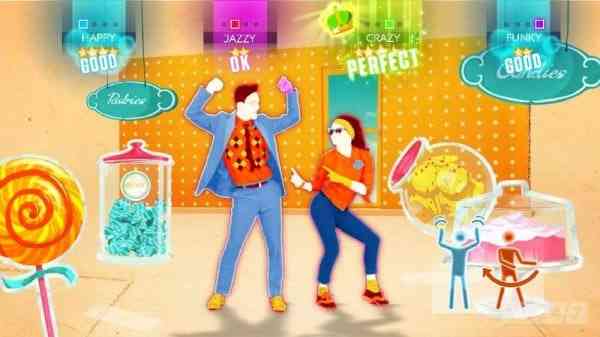 One of the best things Just Dance 2014 has going for it is how easy it is to navigate the menus and I loved how quickly I could jump into a song. Also, there were no lag issues when navigating the various screens which was really nice. In fact, even as the game was downloading onto my Xbox One’s hard drive I was able to dance to a few of the tunes which had already been downloaded. Everything in the game is accomplished with the Kinect’s motion controls. Raising one of your hands allows you to flip the songs on the screen and select which one you want to jam to. It really is as simple as that. You can also use the Xbox One’s wireless controller to jump into a song if you prefer to go that route. I have to admit at times I preferred sitting back using the controller as it was simply quicker to flip through the selection of songs. Besides I like to grab a seat and relax in between songs anyhow.

For those dance floor challenged folks like me Just Dance 2014 is a very forgiving game. For starters, you don’t have to be completely accurate with your dance moves. You can cheat a bit if you want to. Yes, you are supposed to use your full body as you follow the on screen dancers. Yet I did find that as long as my arms were moving where they should I was pulling off good scores. That is of course if you are all about the scores and you don’t care how good you look. The intent of the game however, is to dance and have some fun. Looking terrible while you try to pull off some of those complex dance moves is where the game becomes a charming. Watching your buddies, daughters or girlfriends looking absolutely ridiculous while they try to follow the on screen dancers is where you will have some of your best times with the game. Trust me.

Just Dance 2014’s songs range from Daft Punk’s “Get Lucky” to Disney’s Aladdin “Prince Ali”. Here is where I take some issue with the game. The song selections seem all over the place. The Disney song and George Michael’s “Careless Whisper” don’t fit with that general top-40 Just Dance vibe. Perhaps it is just me but there are about 10-15 songs I could have done without. The game shines when the top-40 pop and hip hop tunes are playing but not so much when, for instance, that god-awful “Aquarius” song is playing. Also, I would have preferred a few more songs as well. When a game like Guitar Hero Warriors of Rock includes well over 80-songs, 40 seems a little thin. This being said, the amount of songs you do get out of the box is on par with dance games already on the market. 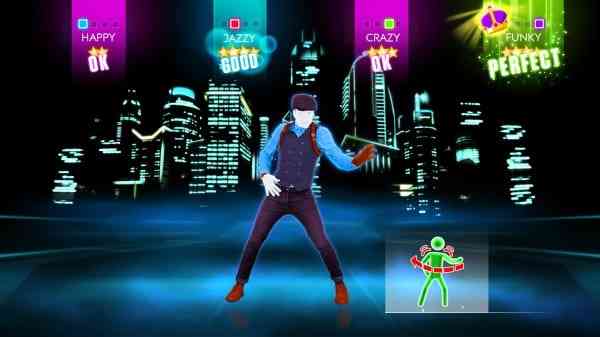 In terms of modes, the Classic free-dance mode from previous Just Dance games returns. Battle and Just Sweat mode also return. The Just Sweat mode is exactly what the doctored ordered for me as I can burn some calories while dancing away to some tunes. In terms of new modes there is an On-Stage mode where one player dances the lead role and two other players dance to the back-up routines. World Dance Floor is where you can dance with others from all around world. Players from all countries can meet new dancers, dance together and compete with each other. You can also upload some of your autodance videos on Just Dance TV. You can view videos from your friends or the Just Dance TV community. You can also share some of you clips on your Facebook and Twitter accounts as well. All in all the new modes are nice little additions and only serve to enhance an enjoyable dance simulation game.

Fortunately for Ubisoft, Just Dance 2014 is the only virtual dancing simulation available for your Xbox One. It is not that it is a bad game; in fact, it is quite the opposite. The game shines when playing with a room full of people and it is one where anyone at any skill level can jump in and have some fun. It is a rock solid virtual dancing experience but one that doesn’t really push or even come close to maximizing the Xbox One’s potential. It is a valiant effort for a launch game but the franchise will need to see some sizable improvements if it wants to sustain any kind long term success on the Xbox One.

Next World of Warplanes (PC) Review – Flying the “Unfriendly Skies” for the Win…Pew, Pew, Pew.
Previous Tearaway (PS Vita) Review – An Unforgettable World in the Palm of Your Hands