Crimson Dragon, you wicked temptress. You promise dragons with homing missiles. You promise a good time. What you deliver though, is freight trains with wings. Why must you offend with tired tropes and oceans of text instead of giving me fast, frenetic action? Your promise goes unfulfilled, and I am left to wonder what could have been.

Crimson Dragon wasn’t always meant for Xbox One. In fact, it was supposed to be released in June on the Xbox 360 before mysteriously disappearing. In short, its roots show. It feels rushed. I frequently thought to myself; “Self, maybe all rail shooters are actually this bad. Maybe your fond memories of Star Fox 64 are false?” Sadly, no. I revisited Star Fox 64, and rapidly disproved my hypothesis. Where Star Fox feels responsive and satisfying, Crimson Dragon feels like a chore. 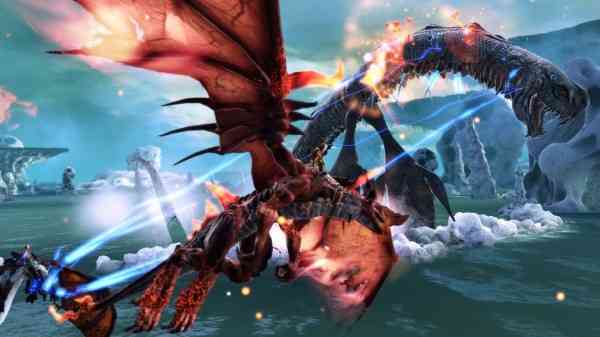 The on-rails mechanic is partially to blame. The camera continuously forces your dragon right into the danger you’re trying to dodge, making guiding the dragon seem pointless. While the camera is busy pitching about in a disorienting fashion, the targeting reticule does not maintain a position relative to the dragon. In other words, the giant snake dragon you had lined up in your sights is now behind you. An option to change this behavior would be welcome. On rare occasion and for brief periods you’ll be given full control of your dragon, and these sections serve to highlight how limiting 90% of the game is. It’s like a rollercoaster that’s devoid of tension or imagination.

The story is poorly conceived, spinning a yarn about humans living on planet Draco and riding Dragons, while a deadly virus threatens to destroy all civilization. At least, that’s what the talking heads told me before I started doing other activities during  dialogue to avoid committing harakiri. The plot has zero bearing on your actions, which are themselves tired and repetitive. 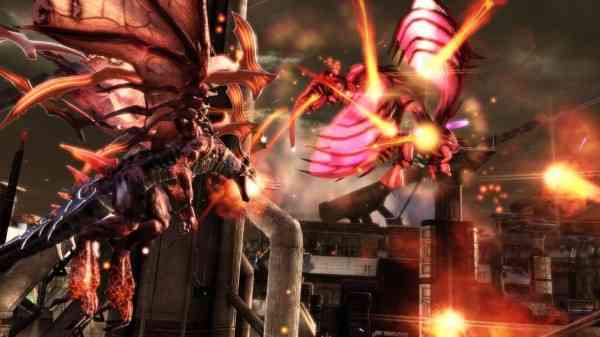 When you picture a dragon, you likely think of a strong, swift, majestic creature. Crimson Dragon’s denizens are anything but. The dragons change direction in about as much time as it takes the Death Star to fire, and generally have a life expectancy similar to crystal stemware shipped by UPS. Dragons can barrel roll side to side to avoid enemy fire, but the bumpers on the Xbox One controller make for an inconsistent experience. Because the bumpers are unwilling to click unless pressed on the extreme outer edges, it makes shifting from trigger to bumper a much larger jump than on the 360 (or PS4 for that matter). Shooting isn’t terribly precise either, but doing the joystick equivalent of button mashing usually results in enough target locks to get by.

Fortunately, there are a wealth of dragons to choose from. Unfortunately, I couldn’t find any reason to switch from the default dragon. New dragons are unlocked for purchase over the course of the story, but they all start back at level 1, making them completely useless without massive level grinding. There’s a rudimentary elemental weakness system in play too, but any dragon can learn skills of any element, thus removing most of the strategy from the proceedings. The RPG mechanics in general are much the same as the rest of the game – a half baked tease. Skill learning, stat boosting, and dragon evolving ought to be exciting and stimulating, but they provide minimal reward for the amount of work they take.

Crimson Dragon employs the worst current trend in gaming – paying to beat the game. Dragons can be upgraded with extra experience etc. provided you’ve earned enough credits to do so, unless you want to spend real money. “Jewels” can be purchased from the get go – you could max your dragon’s level before even flying a mission, for a price. The thing is, the game is just enough of a grind to make jewels seem like an attractive option. I sincerely hope that Microsoft (and others, *cough* EA *cough*) take a hard look in the mirror and realize those tactics do nothing but alienate the audience. 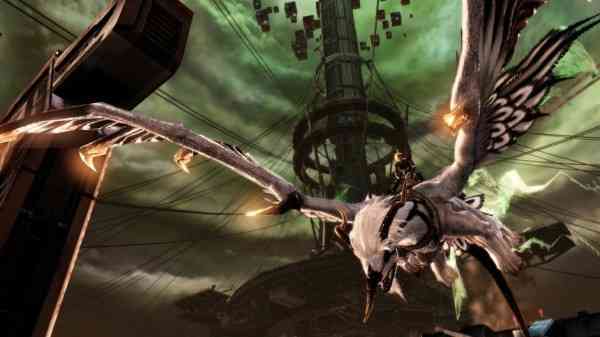 Aesthetically, Crimson Dragon’s origins show. The dragon designs are passable, but the game could hardly be called good looking, even if it were still an Xbox 360 title. Cutscenes consist of static images on a static background, combined with lifeless voice acting.

The music on the other hand, is far better than the game deserves. The high quality tunes would be right at home in a new era Final Fantasy game, and feel high-fantasy and whimsical on a level the visuals and gameplay do not match. Big kudos here.

Crimson Dragon isn’t the worst Xbox One launch game, but it’s far from good. The RPG elements have promise but lack the polish, while the gameplay and visuals fail to resonate on any level. It’s a title that feels devoid of passion, and not even the great soundtrack can save the game’s flying 18 wheelers from utter mediocrity.

Next Tearaway (PS Vita) Review – An Unforgettable World in the Palm of Your Hands
Previous Xbox Fitness (Xbox One) Review – Get Off Your Butt , You’ve Got Some Calories to Burn