Tales of Hearts R Review – A Heart of Gold? Well, Not Exactly.

Spiky hair: check. Teenaged protagonists: check. Anime style: check. Random battles: check. Mystical connection between the soul and magic powers: check. Confirmed: Tales of Hearts R is a Japanese RPG in the truest form. The glowing pedestal JRPGs sat on in the 90’s is gone — does Tales of Hearts R defibrillate the genre?

Let me first prepare you – this game is extremely Japanese. Ready? Good. Tales of Hearts R tells the Story of Kor Meteor (yep!), a young man living in a small town. Early on he happens upon Kohaku and Hisui Hearts, a brother and sister who are embroiled in conflict with an evil sorceress. During a battle, Kor accidently shatters Kohaku’s Spiria (the game’s analogue for a soul or magical essence), leaving her an emotionless husk. From there, you can probably guess where the story goes; an ever expanding ragtag band of heroes are tasked with rebuilding Kohaku’s spiria while also beating back the forces of evil. 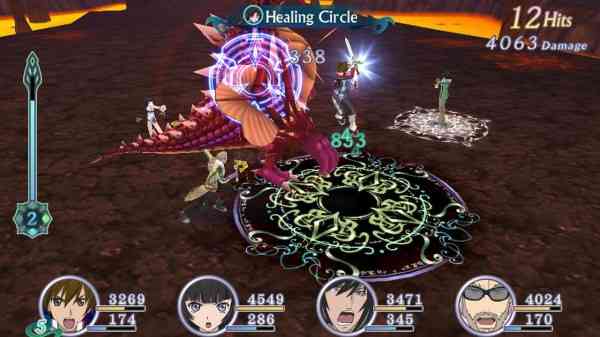 For a genre that usually deals with the end of all existence, Tales of Hearts R tells a surprisingly restrained story. Unfortunately, it isn’t successful in developing the characters in a meaningful way, who are generally one dimensional. The dialogue is something of a mixed bag. It made me equally chuckle, face palm, and scratch my head. While there are plenty of clever one liners, they are outweighed by juvenile, groan inducing ‘jokes’ (hint: boobs). When the games industry is already under intense scrutiny regarding gender equality, I question the wisdom of reinforcing antiquated industry stereotypes with eye-rolling japes every few minutes. Beyond that the quality of translation is suspect, but only sometimes. Most of the time the characters exhibit proper grammar, but there are a few lines here and there that just seem wrong. The voice acting is exclusively Japanese. I’m no expert on Japanese, but I found the voices grated on my nerves – everyone seems to be constantly yelling. The voice volume quickly found itself near zero.

Many aspects of the game are super traditional. There’s a substantial overworld to run around in, treasures to find, towns to visit, and NPCs to interact with. There are random battles too, but there’s no archaic turn based battle system to be found here. What we find instead is the most interesting aspect of Tales of Hearts R, and the reason I kept engaged in the game. Each character wields a soma – a mythical weapon that takes a form based on the person who uses it – and has access to a variety of skills. When a battle begins, there is a complete sense of freedom. You’re free to run around the environment in any direction, but can also stay in a single 2D plane and utilize a control scheme reminiscent of a fighting game. While movement is unlimited, a character has a limited number of actions they can take, whether they are physical attacks, spells, or item uses. A handy meter keeps track of how many actions you can take, and it refills over the course of time. I liked the strategic spin the meter put on what would otherwise be a complete free for all. Only one character is directly controllable during battle, but control freaks can tweak battle behaviours extensively to satisfy their inner urges. This system reminds me a lot of the Gambit system in Final Fantasy XII, and is both simple and robust. It offers a lot of options for approaching battles, though I didn’t find I needed to play around too much to be successful – the game isn’t terribly challenging. 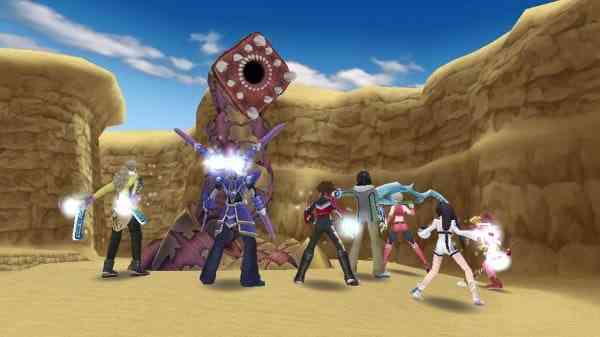 Between battles, points can be allocated to a variety of skill categories like Fight, Endurance, and Sincerity. The names of the categories give some indication of the skills they contain, but there is no way to see what skills might lay much further down the tree. Fortunately, points are plentiful, and most skills are at least occasionally useful. Upgrading adjacent categories leads to the acquisition of skills that synergize the two trees. It’s an interesting system, and it allows for massive flexibility in how you decide to build characters.

Technically, Tales of Hearts R closely follows the traditional Anime aesthetic. Spiky hair = hero of course, and female figures are often comically shaped. It runs smooth as butter though, and I appreciate the use of vibrant colors when most games are rather drab. The hand drawn anime cutscenes are very well done, with quality similar to most high end anime out these days.

While Tales of Hearts R succeeds in providing interesting gameplay, it fails to offer a compelling storyline. The battle and upgrade mechanics are sound, but the juvenile dialogue might turn some people off trying it. It doesn’t break new ground or advance the genre in any significant way, but fans of anime or JRPGs looking for a new romp could certainly do worse.

Next MotoGP 14 Review – Not Quite A Crotch Rocket For The Ages
Previous Randal’s Monday Review – Clerks’ Jay, Silent Bob and Randal Unite One More Time