My first introduction to Mutant Blobs Attack (MBA) occured at PAX 2011 where we had a behind the scenes look at the game during its development.  It also happened to be my first hands on time with the Vita hardware.  I enjoyed the game enough that once I got my hands on a Vita this was the first downloadable title I purchased.  With a quirky appearance and comedic tone, MBA is a solid title that offers several hours of fun for a great price.

Tales From Space: Mutant Blobs Attack tells the story of a mal-adjusted blob that is released unexpectedly from a blob research center.  One can only imagine the sorts of wrongs done to the blob population in such a place.  With you in control of the blob it is your job to wreak havoc on the world as you seek revenge on your captors through 24 platforming style levels.  What MBA does really well right from the introductory cut scene is pit your character (the blob) as the good guy.  Even though his intentions are ill against the human race it is a lot of fun to play from this point of view.  In order to progress through the levels you must consume things which make you grow in size, a little bit like Katamari Damacy.  You begin the game only centimeters big and by the later levels you’ll have grown to an impressive scale.  As much fun as the game play is (and it is great), I had equally as much enjoyment following the story.  MBA also has a fantastic ending that I would rank in my top three to five game endings.  It is one that is well worth spending a few hours to play this one through to completion. 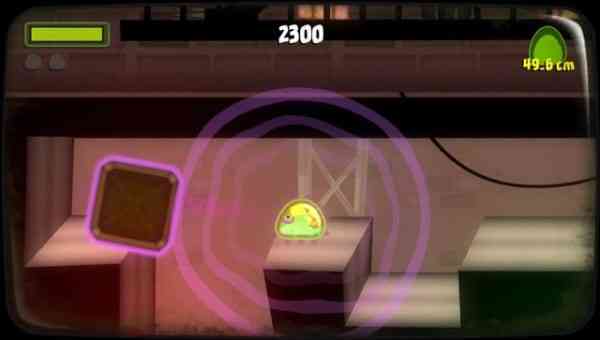 The game play and controls are simple and precise.  Standard platforming elements such as wall jumps and stomps are present but you aren’t limited to those controls.  You will have to employ other control elements such as using the front touch screen to manipulate objects, using magnetic attraction and repulsion to propel yourself avoiding bad things.  Also, you use thrusters during low gravity segments to get through levels.  The variety in use of these control elements is well balanced and serves to keep things feeling fresh throughout.  Some of the controls have been tweaked since my play time with an early build of the game at PAX for the better.  You no longer use the front touchscreen for the thrust controls.  I found this difficult and imprecise and am glad to see it was changed.

Each level isn’t simply completed by making it to the end but also measured by the time you take to complete it, the score you earn and whether or not you collect one or two of your blob “friends” who are hidden within each level.  This adds a nice sense of replayability to the game in that quest to get gold medal scores or to find all of your blob friends.  The level of difficulty never gets overly hard either.  I’m a casually skilled player and got through the entire game in just a few hours.  That’s pretty good value for the price and I’ve already found myself going back to either find a blob friend that I missed or try for a gold medal score.  Getting all golds will likely take some chops though, and luck!

As I touched upon earlier, MBA never takes itself too seriously.  There are frequent nods to gamer culture, comedic moments and sights that should incite at least a giggle out of gamers including a nod to a TV personality or two.  Whether it is intentional or not the likeness is obvious enough for me to think it is.  MBA strikes a great balance between great game play and presentation style. 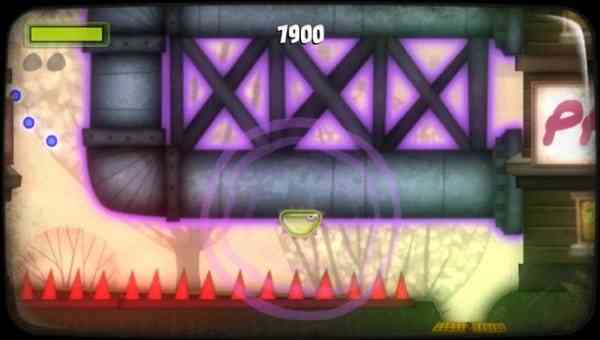 If measured from a technical standpoint, MBA may not win any awards for its graphics but don’t let that sway you.  MBA has a terrific, comic-style look to it that is all its own and really fits well with both the game’s overall theme and campy humour.  Your blob demonstrates simple but fun physics as it oozes and squishes into various shapes depending on what you are doing.  The real star for me is the environments.  As your size grows and the levels progress so do the scale of the environments.  Starting out as a teeny blob, you will find yourself playing through a college dorm eating little things like screws and erasers.  Later on you will find yourself in rocket ships and city scapes eating vehicles, cattle and more.  All in all, the game looks decent but barely pushes the limits of the Vita hardware.

Overall, the sounds in the game are fairly decent as well. I will not go as far as to say the sound effects and musical score give everything a B-movie feel but, like the graphics they are campy, quirky and fun all in a good way.  Characters in cut scenes natter away in their own language and still manage to further the story.