Everyone’s favorite Dragon Ninja is back with the latest Ninja Gaiden!  It was great to hear that Team Ninja was bringing back Ryu Hayabusa.  The series is legendary for its unwavering difficulty, intensely gory animations, tons of enemies, platforming and precision.  Ninja Gaiden has been around since the days of the NES and has created a number of trademarks for the gaming community including cinematic cut-scenes and controller throwing difficulty.  The first 3D version of Ninja Gaiden was released in 2004, with Ninja Gaiden II released in 2008, and now we have Ninja Gaiden 3.

Ninja Gaiden 3 is a hack and slash action platforming game which follows Ryu through numerous levels of varying environments and terrain.  It offers up a story that develops his character further than many of his previous adventures.  Through the use of his trademark Dragon Sword and Kunai, Ryu hacks through copious amounts of soldiers, psychic telepaths, and even a virtual reality world.  The narrative is viewed through an objective view of the events, and includes many plot twists that keep the game interesting.  The story is broken up over a period of five days and incorporates unique boss battles and levels.  Ryu is again tested and pushed to the very limits of the human body, his Ninja abilities. and even to his past.

The story campaign is a singular one; Ryu is contacted by a government agency for his safety and asked to complete numerous tasks.  In carrying out these missions Ryu comes into contact with an Alchemist who curses him, giving Ryu only a few days to live; hence the 5 day campaign timeline.  This affects the gameplay as during the course of the curse (did I just say that) you learn more about Ryu’s past and his strange weapon mechanic.  Moreover, due to the curse, you will be subject to watching chaos and horror through a first-person perspective.  It is a lighter story than most games which put you behind the mask and bloodshed, but it was enthralling as I was truly curious to see who the masked men were and why they wanted Ryu.  Though one could see Ninja Gaiden 3 as a continuation of the previous games, it is a stand-alone game and doesn’t need much back story to explain the bloodshed. 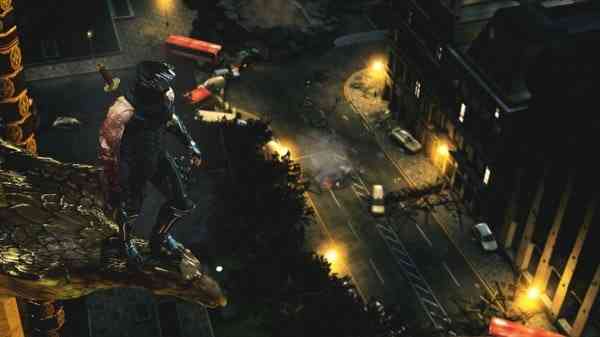 The campaign takes about 10-20 hours to complete.  This is dependent on your skill and the difficulty setting you play on.  Overall, the game was worth playing as I felt like I had accomplished something by beating each day.  Although it was enjoyable on the surface, I couldn’t help think that it lacked some of the depth that the Ninja Gaiden franchise is known for.  With this latest instalment there are now more enemies on screen and each are deadly on their own, but when compared to the enemies of the previous games they are not to the same degree as enemies you have battled before in the franchise.  I did find that bosses are excessively difficult on the higher settings, with the Act 3 boss having a huge area of damage and one-hit kills.  Although Ninja Gaiden 3’s experience is more streamlined for the casual gamer this time around, it still offers up a challenge for hard-core fans of the series.

The controls are your normal hack and slash setup: light attack, heavy attacks, ranged attack, and jump buttons.  These are supplemented by the use of a bow, Ninpo (Ninja Magic/Summoning attack) and a curse attack.  There are also quick time events, which are required to get to a new area or to dispatch an elusive enemy.  These QTE’s can break up the monotony of button mashing and eviscerating your enemies.  By pressing R3, which is the right analog stick, the proper path through a level is displayed, making the entire game very linear and reducing the gameplay to a series of battling 40-50 enemies, then some level progression or quick-time events, and then back to another bout of enemies.

Ninja Gaiden 3 supports the PS Move, but it is quite shaky and is really only available in ‘Hero mode’.   There are a number of problems with sensing button inputs, and the motion detecting sensitivity is set so high that it is hard to detect vertical versus horizontal motions, especially with the vibration.  The PS Move also inhibits camera control as it can only be centered behind Ryu.

In addition to the story campaign, there are trials and online multiplayer.  The trials can be played cooperatively.  These pit you against a number of enemies with certain bonuses coming from completing certain criteria (e.g. steel on bone attacks, finishing an enemy with a Kunai, etc.).  The bonuses you get from completing the trials make it somewhat worthwhile as you can entirely customize your ninja with shin guards, a head place, colour, Kanji and even eye/skin colour.  You also get experience to level up, unlocking more bonuses for your ninja.  These are immediately transferable to the multiplayer arena, as you can fight in team battles and pit your ninja skills against others online.  I didn’t experience any noticeable lag when heading online, which could be a by-product of dedicated servers or the download code.  Interactions online are great and skill testing as attacks and blocks are crucial for survival, but be careful as there are numerous spawn campers waiting to kill you.  I thought that it would be nice if there were an auto-balancing system to make sure the teams were equal which in turn could make some of the online matches a little more enjoyable. 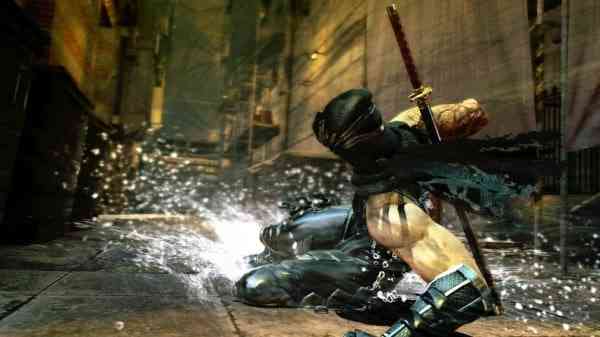 Visually Ninja Gaiden 3’s graphics are pretty good.  The terrain and level design is spot on, ranging from jungles to a desert setting, and even a virtual world within the game.  Pools of water interact and look as they should which only highlights the graphic engine.  As for the character design, everything is crafted with excellence; you can distinctly see each of Ryu’s armor plates, his sword and helm, and even the kunai’s on his leg.  Enemy character design was a mixed bag as it was either just as detailed as Ryu with armor and weaponry or very simplistic.  The game supports 720p, which explains a little bit of the perceived choppiness of the textures that I noticed.  The cut-scenes were also not as good as they could have been as motion and focus really did not shine through and facial movements were completely underemphasized.

Your sword is also a large part of the game and you will watch it impale, slice, dice, and eviscerate your enemies.  Ninja Gaiden 3 is a really bloody game; you need to be able to handle senseless violence and gore to be able to withstand some of the brutality.  This includes approaching lone soldiers after their surrender, listening to their stories and finishing them off in a gruesome fashion for emphasis.  The red veins on Ryu’s arm are his curse, and a gameplay mechanic is based on this.  Moreover, his ninpo attack summons a golden dragon that catches all of your enemies up and destroys them with a giant crunch.  Overall, the graphics are up to the series staple, and although they did not truly improve them over the last four years I believe that they are still superior to many games on the market today and are considered above average at worst.

The sound in Ninja Gaiden 3 can be deafening at times; the musical score is either really cheesy metal or sounds like it could be taken out of a Metal Gear Solid game.  Either way, it pumps you up and excites you to slaughter your enemies!  Background music is noticeable, but stays in the background and does nothing but compliment the game.  The music adds very well to the overall feeling and is consistent with action on screen.  The use of silence is such that one can sense a shift in tone that adds to the atmosphere the music creates. 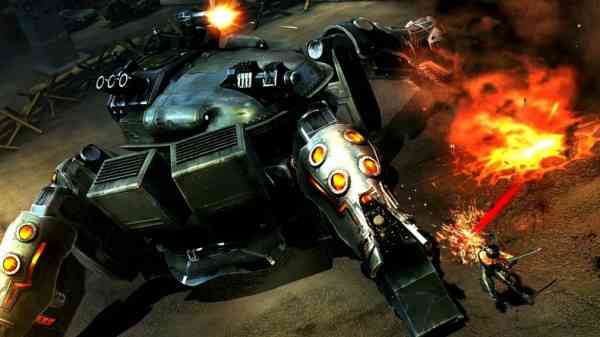 For the most part the voice acting gets the job done.  It can seem monotone at times and there is certainly a lack of urgency, rage, anger and emotion for a controlled, calm and accepting vocal mood,  but a Ninja is supposed to be calm, so emotion-laden vocals would seem out of place in a game that attempts realism.  Overall, one could do without the voice acting as a whole as for the most part as it doesn’t really add too much to the game with the exception of the red-cloaked alchemist boss.  His voice is akin to V from V for Vendetta and truly impacts the story through his words.

As for the sound effects, they are perfect.  From a sword clanging when hitting a metal object to plunging your weapon into someone’s abdomen, all the sounds convey the on-screen action quite well.  Explosions do not sound louder than everything else on screen and gunfire does its job.  It truly sounds as if you are running about; slicing down your enemies in the midst of a gun battle while all sorts of crazy stuff goes on around you.  Overall the sound is great and really sets the tone  for the game.

Although there is not as much urgency or emotion as in the previous games in the series, Ninja Gaiden 3 is efficient in setting out the pace of battle with some memorable fights.  That being said, I did find that it could become long and drawn out at times and the lack of extra weapons (the bow being the only one) and a decreased emphasis on voice acting and CGI cut-scenes dampened down some of the experience for me.  At the end of the day though the trademarked blood and gore combined with new features and more backstory have made Ryu’s latest adventure one to be played and remembered.