The classic arcade rhythm game is back, and this time for PS4 and Switch owners! Despite being released on the same day, the two games are slightly different from one another – they even have different titles with the Switch version being called Taiko no Tatsujin: Drum ‘n’ Fun. For this review, I will be focusing on my experiences with Taiko no Tatsujin: Drum Session!, the PS4 version of the game.

One of the first things I wondered was if I would need a drum controller for Taiko no Tatsujin: Drum Session!, and whether or not I could find a bundle for it if I looked. It would be fun to have a drum accessory to play on—I mean, the amount of coins I’ve fed into the arcade machine could have bought me one by now. However, as of this moment, there isn’t a bundle readily available that includes the drum controller, and if you want it, it is not easy or cheap to get. Fortunately, it is also not necessary to own the accessory to still have fun.

If you have played Taiko no Tatsujin in the past, it’s just as you remembered, but with extra challenges. And if you haven’t played it before, the game is extremely easy to learn. When a red drum (“don”) appears on the screen, you hit the face of the drum; when a blue drum (“ka”) appears, you hit the rim. If using the Dualshock controller, you have the option to select which buttons you would like the face of the drum to be, and which buttons you would like the rim of the drum to be. There is also a helpful tutorial at the beginning that shows you the basics of Taiko no Tatsujin. You can choose your level of difficulty after selecting a song, and you can also switch up the speed and score-counting system for different experiences. 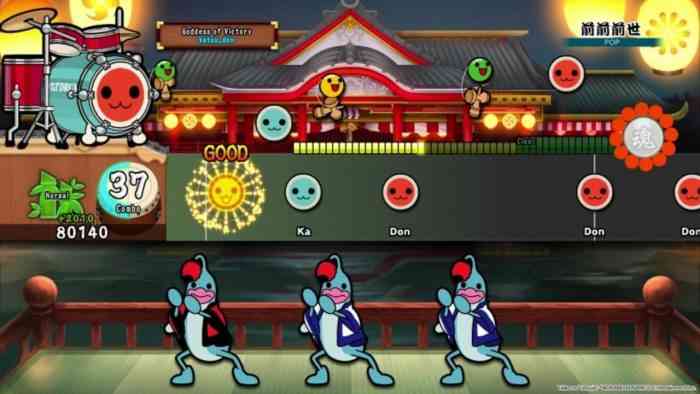 There are also fun challenges in the game where you fill out a Bingo card for each song. Each field in the Bingo card is a goal you want to reach for your song, including things like completing the song with zero mistakes, achieving a certain score while playing it at twice the speed, and so on. Once you complete your Bingo card, you can choose to receive a more challenging Bingo card with fields that can only be completed if you play at least level “Hard.” There are three rows and three columns in each Bingo card, and each line you complete earns you a coin. These coins allow you to shop in the in-game store where you can purchase a mystery box that will give you a surprise product, like clothes and accessories (and sometimes, nothing at all).

There is also a unique online mode where you can play Ranked Matches against other players’ “ghost” performances, which are really their past attempts at a song. With this, you don’t have to wait to be matched with a current online player and there is practically no lag since you’re playing against someone else’s previous efforts. There’s also a scoreboard where you can see who the top players are, and if you’re ambitious you can spend a lot of time playing against many ghost performances.

Can’t Hold It Back Anymore

Of course, we need to talk about songs. Some of its classics make a return and some new songs were added as well. Finally, we can play old songs like “Linda Linda” and “A Cruel Angel’s Thesis,” and then choose “Let It Go” right after (yes, the Frozen song). It’s a great game for all ages since kids will recognize the newer songs and adults will rave over the oldies we played as children. Plus, the visuals are extraordinary and the animation is smooth, colourful, and syncs well with the rhythm. I only wish there were more songs available in the game without having to buy DLC songs, as there was a surprisingly large number of songs for purchase. That’s not to say the current song list isn’t enough, but it would be nice to have more songs included versus songs for purchase. Of course, each DLC song is only the price of your morning coffee, so it is affordable if you see one you really like.

All in all, there’s enough happening in Taiko no Tatsujin: Drum Session! that can keep you entertained for a long time. If you’re looking for a challenge, you can try filling out all the Bingo cards, beating your own high scores, and playing with friends and strangers online. There are fun rewards and lots of familiar songs that make this game feel nostalgic yet new at the same time. While there was opportunity missed by not having the drum controller available here, Taiko no Tatsujin: Drum Session! is still enjoyable by itself.