I’m a sucker for a good shoot ‘em up (shmup) game. The original Geometry Wars was one of my favorite Xbox 360 titles and I’ve probably sunk in more hours into it than I should admit. Since then there have been a few great twin stick shooters to come out, including the sequels to Geometry Wars and Super Stardust for example, and now Eclipse Games brings us yet another game in the genre, Tachyon Project, but does it do enough to stand out on its own two sticks or will it simply be remembered as a knockoff?

Sure, if you’re simply looking at Tachyon Project at a surface level you’ll instinctively think that it’s simply an imitation of Geometry Wars, but there’s more to it under the surface that I feel makes it stand out among its competition. Shmups aren’t for everyone, as you need twitch-like reflexes and have to be in a hyper sensitive ‘zone’ to truly do well in these games. Luckily I’m quite good at these, so Tachyon Project excited me as I wanted to see if they were going to further the genre. 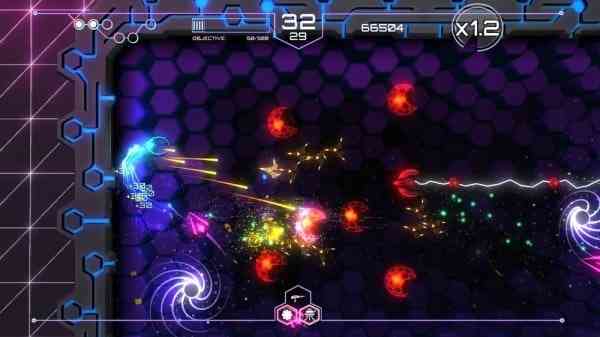 Generally, the goal in a shmup is to either rack up a high score or simply survive for a set amount of time while you try to progress to harder levels or difficulties. What Tachyon Project does different from the immediate get-go is that it includes a story. Yes, narrative in a shmup game, I was taken by surprise too. Now, don’t go in expecting anything amazing plot wise, but the story revolves around your little ship actually being a visual avatar of Ada, an AI created by her ‘parents’. She was created to hack into servers and something happens to her ‘parents’, so she wants to find out what happened to them; to do so she will have to hack police servers and even larger corporations to solve the mystery. As a whole, the story feels unneeded, as a narrative isn’t why you play the genre, but kudos to Eclipse Games for at least finding a somewhat interesting way of adding a story to the gameplay. Don’t expect much from the writing, and it’s presented in storyboard-style, so there’s no voice acting either.

If you’ve played Geometry Wars, or any other title in the genre, you’ll instantly feel right at home and know exactly how to play without much explanation. There are some variants to the core gameplay though that makes Tachyon Project more than a simple imitation. You play in a 2D top-down view where your left stick controls Ada’s movement and the right stick controls the direction she shoots, just like any other shmup. Defeating enemies will drop little pickups that increase your multiplier which are used for increasing your high score, and if you get hit your multiplier counter goes back to 1.0, as does not killing enemies in rapid succession.

Again, simply by a quick glance it will seem just like Geometry Wars, as you’re attacking various shapes like squares, circles, and triangles, but after a few levels you’ll notice that they start to become more elaborate as they have tricks to try and defeat you. Stationary mines, for example, eventually have a variant where spikes comes out to try and hit you if you get too close, or an enemy might put on an impenetrable shield which can cause havoc with your current strategy.

“Tachyon Project does enough things to make itself stand out against the bigger names in the genre and be competent, but falls short on doing much else to really rise above and beyond the kings of the category.”

The campaign consists of 10 levels, each of which has multiple stages that need to be completed in order to progress further. Early on you’ll simply have to defeat a certain amount of enemies, where as the latter stages have you trying to survive for a certain amount of time to progress further. Each wave is timed, and what Tachyon Project does very cleverly is tie your health into that time limit. In Geometry Wars you simply had a certain amount of times you could get hit, but in Tachyon Project the game ties your ‘health’ to the actual timer. Get hit and you lose a few seconds of precious time to complete the level. The same goes for when you use your special weapons or bombs. I really like this alternate mechanic, as you don’t always have to have a ‘perfect’ run, but the risk versus reward is still present, as you need to weigh the cost of getting hit or using a special attack to losing precious time.

Before each level you can customize Ada with any new weapons or upgrades you’ve unlocked by completing certain levels or obtaining a specific score in stages. You start out with a basic shot that shoots low and does little damage, but you can eventually upgrade your ship to have a shotgun blast, laser, or other types of shots and power-ups to suit your playstyle or the type of level you think it would be best suited for.

As I mentioned above, visually it looks much like anything we’ve seen in the genre before, but having the new types of enemies, visually and mechanic wise, is a welcome change. It’s not as visually appealing when compared to Geometry Wars, as that game tended to add a little more flair, such as the grid seeming to warp, but for a small indie developer, and specifically for this genre, the visuals are more than adequate. As for the audio, it’s also typical to what you’d expect from a game like this. Tracks will vary from more mellowed rhythms all the way to some hyper-dance electronica, both of which suit the background and gameplay appropriately. 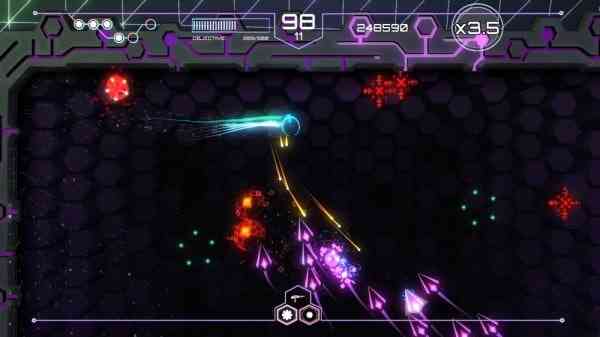 If you’re a completionist there’s content here to keep you coming back at least for a little while, as many of the unlocks are tied to reaching specific scores in the harder levels, as are some of the achievements that require you to kill a specific amount of enemies with a certain weapon or load out. There is a secondary Challenge Mode, but it’s disappointingly minimal and most likely won’t have you keep coming back for more unless you’re a leaderboard chaser.

Even if you’re quite skilled in the genre like myself, be warned of an extreme spike in difficultly in the last few levels. I found myself stuck on one of the levels where the difficulty ramped up completely out of nowhere and it was incredibly frustrating. Once you do complete the campaign, the lack of compelling extra modes really does hinder the title as a whole, again, unless rising up on the leaderboards are your thing. Tachyon Project does enough things to make itself stand out against the bigger names in the genre and be competent, but falls short on doing much else to really rise above and beyond the kings of the category.

Next Legends of Eisenwald Review – This Mix of RPG, Strategy and Turn Based Combat Falls Short
Previous Rocket League Review – The Servers Stink But That Should Not Stop You At All