One of this month’s free games for PlayStation Plus subscribers is Rocket League, an exciting new combination of soccer and RC cars that’s easy to learn but difficult to master. Rocket League feels like an old Tyco commercial meeting modern day gaming, and quite frankly it’s awesome. Customize your car, get it out on the pitch to battle for possession of the ball, and do as many crazy wall rides and flips as you deem necessary to out-manoeuvre the opposing team.

The rules are simple: teams consisting of 1-4 players ram a soccer ball into the opposing net to score points. The most points at the end of the match wins. While I found 1v1 to be a little boring, any other player count was really fun and allowed for some very dynamic games. In Rocket League, you don’t always need a goalie. Shooting on target isn’t always simple, and regularly requires jump and spin shots to get the angle just right. Because of this, possession can change rapidly in a match and rebounds can look incredible.

The entire aerial aspect of the game allows for elaborate set-ups and shots, with some talented individuals on YouTube posting insane goals. It’s surprising just how much finesse is actually required to master such a simple game, and that is very good design. Even a couple hours later, Rocket League is still fun and challenging. Whether you’re playing through a season against bots, against friends, or playing with them as a team, there’s always a nice sense of satisfaction when you jump just right and challenge an opponent for a goal.

“Normally priced a little higher than twenty dollars, Rocket League is still worth the buy if you either miss out now or just don’t have a PlayStation Plus membership.”

Playing online can be a little intimidating, but grouping up with friends is a total blast and is very reminiscent of other less serious sports titles like NHL Hitz, Blitz: the League, or NBA Jam. Overall it’s a very friendly atmosphere, with having fun being more important than winning. It’s kind of hard to be mad if you lose when your opponents are pulling off epic saves and impressive long shots. Often times, even with skilled players, there are fluke goals where an odd bounce sends the ball across the pitch and you simply can’t catch it in time. All of the mayhem really makes for a fair playing field, and even less-skilled players can feel like champions.

As for the customization and ranking up system, it offers a lot of variety. You can gain access to a couple handfuls of car bodies rather quickly, and slowly unlock rims, paint, and hood ornaments. With a few other options thrown in as well, it’s hard to come across the exact same car once you’re past rank eight or so. It would be nice if you could save a few configurations; having three slots to choose from would be an easy way to keep a style you like and then try something new without having to change it back. 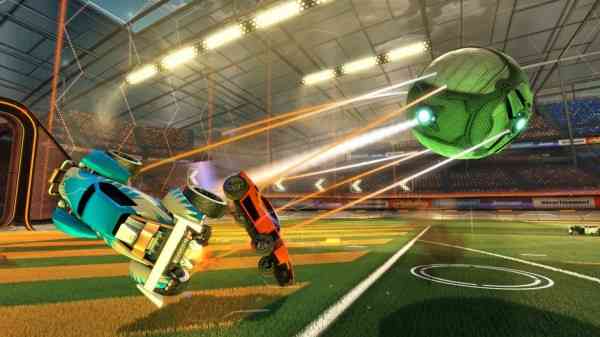 There aren’t a lot of problems with Rocket League and that is a great thing in a free game for PlayStation Plus members. Normally priced a little higher than twenty dollars, Rocket League is still worth the buy if you either miss out now or just don’t have a PlayStation Plus membership. Sure the servers have been hit and miss given the massive popularity of the game but we are confident this will improve over the coming weeks. For those of you who grew up with some of the more outrageous sports games like NFL Blitz and NBa Jam, Rocket League can offer some invaluable fun and playtime. It’s hard to beat solid mechanics and a sense of camaraderie you usually only get from playing sports. So gear up, head out to the pitch, and score some goals for all the kids who wished they owned Tyco RC cars years ago.

Next Tachyon Project Review – A Shoot ‘Em Up that Can Hang with the “Big Boys” in the Genre
Previous Grey Goo Review – Can a New RTS Manage to Catch PC Gamers Attention…We Think So.