Sword of the Necromancer Review – A Rogue-Like With Heart

Sword of the Necromancer Review

You had one job. You were hired to protect her. It was just a job, but it became something more. Now she lay lifeless in your arms. But what of that tomb that holds the necromancer? Could she be brought back from the brink? Are you brave enough to delve into the tomb of the dead to save her?

Developed by Grimorio of Games, Sword of the Necromancer is packed with a lot more surprises than your typical rogue-like. Most games of this sort offer minimal narrative and instead toss you into the familiar gameplay loop which most certainly is what you came for. In Sword of the Necromancer, however, you’ll play the good-hearted scoundrel Tama, who has been hired on by the young priestess Koko, on her journey to discover and understand the world she is one day sworn to serve when she takes her place as high priestess. The unlikely duo form a unique bond on their journey – told to us through cut-scenes – and it’s here that Sword of the Necromancer stands out. Tama and Koko are fully voiced during these interludes and the quality of their acting is far greater than you might expect.

A Tale of Heartbreak and Sacrifice

As with any story involving a necromancer, the game begins when tragedy has struck. Tama has failed to protect Koko, and the priestess has been slain. She brings her friend’s lifeless body to the temple of the necromancer and seeks the power to bring her friend back from the dead, and so begins your quest. Tama must survive the trials of the dungeon and face off against the necromancer to revive Koko, and the farther you progress, the more you learn about the journey these two took together leading up to this point. 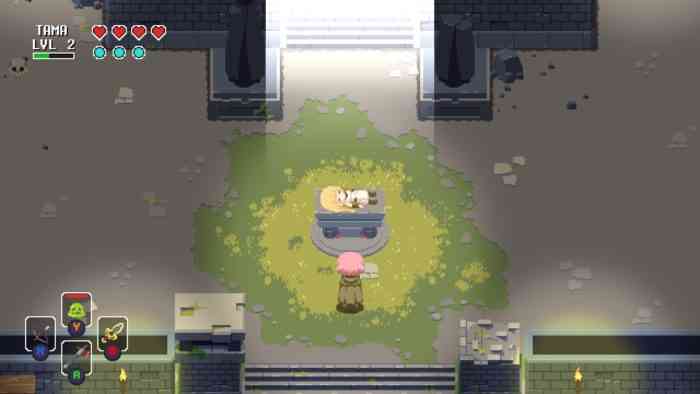 After the tutorial, Tama comes into possession of the titular sword. Upon slaying an enemy, the sword can be used to resurrect the creature under your command and summon it into battle like a morbid little Pokémon. These monsters can even level up after successfully defeating other monsters, making them stronger and unlocking new powers. Rogue-likes often need something unique to hook the player and building yourself a little squad of minions is a great way to lean into the necromantic narrative. One of the game’s core designs, however, also ends up as one of its most confusing and disappointing aspects: inventory.

Tama can use four items at any time; one for each face button. One of these is dedicated to the sword of the necromancer, so the other three comprise random weapons or items found in the dungeon, as well as any resurrected monsters. There is an update that introduces a backpack, allowing Tama to carry more items, but those items will not supply their passive effects, nor will monsters held in the backpack heal over time. While this makes for tight inventory management to make the player choose their loadout more carefully, it is also incredibly flawed. Upon defeating a boss you can choose to send any of the items you have back to the item chest in the lobby or continue to progress further in the dungeon.

In the original version of the game before this latest update, If you decide to leave the dungeon at any point – be it returning to the lobby to end the run or if you fall at the hand of your enemies – you will lose any item you are carrying except for the sword. You also will have your character level cut in half. Let’s say I have resurrected a mage and leveled him up a few times. I get to the end of a floor. I can either send him back to the lobby for a later run and now be without the character I leveled, I can return to the lobby and automatically lose him, or I can press on and if I die, I automatically lose him. None of these options appeal to me as I lose any sense of progress. Since items are random in the dungeon, I might find a spear or shield I really like, but my options are to lose it now or save it to lose later and hope I might run into it again. I understand the point of losing something when you fall, but losing everything in a game with such strong RPG elements and having to ignore all those items simply because you can only hold four (or eight with the backpack) feels like a net loss. The latest update does now feature options to toggle item loss off as well as offer other settings to make for a more customized experience, however, these should have been included at launch.

I also feel more could have been done to lean into the idea of becoming a necromancer. Of the four shoulder buttons, they only perform two actions in total. One of them could have been dedicated to an alternate face button menu exclusively for summoning monsters. This would let the player have four summonable monsters at a time as well as holding four items. Instead, if you want even one monster, you have to sacrifice an item slot. 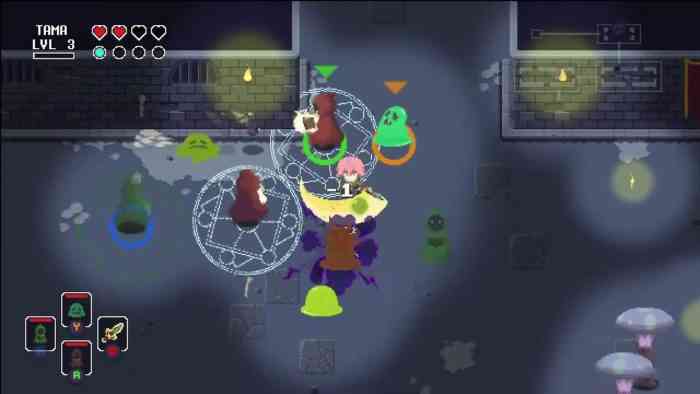 What Sword of the Necromancer does have going for it is its diverse enemies and combat mechanics. Dodging is key to survival (unless you find a shield.) it is swift and effective. Each weapon type handles differently, with swords being short-range and faster, polearm weapons having a longer range but slower, etc. You also can’t simply spam the attack button as Tama needs a moment after each combo, so it becomes necessary to pay attention to your enemy and their patterns. Each enemy type has unique attacks and patterns to watch for which keeps you engaged with every room you enter. Is there a bat? Be prepared to dodge out of their charge attack. Those cute little plants? They spit a long-range, barbed tongue that deals huge damage, so wait until it attacks before you move in. I will say the randomly generated stages can get a bit formulaic and repetitive, but the real treat here is entering a room with a diverse mix of enemies and trying to employ all the proper tactics to survive against them at the same time.

Sword of the Necromancer is a neat, engaging, and surprising rogue-like with some great ideas and a curiously deep narrative. The mechanic of reviving enemies to fight for you is a great concept, and general features like diverse weapons and effective combat maneuvers feel superb, however, this strange inventory design feels like a huge setback. The inclusion of the latest update which allows for a more customized experience is an improvement, but it did sour my enjoyment of the game just a little to not have it from launch. As it stands, you can’t really let yourself get attached to anything other than the titular sword which directly contradicts the key point of the narrative; that Tama has grown attached to Koko. If you are looking for a nice, light rogue-like to jump into that doesn’t feel mindless, this is the game for you. 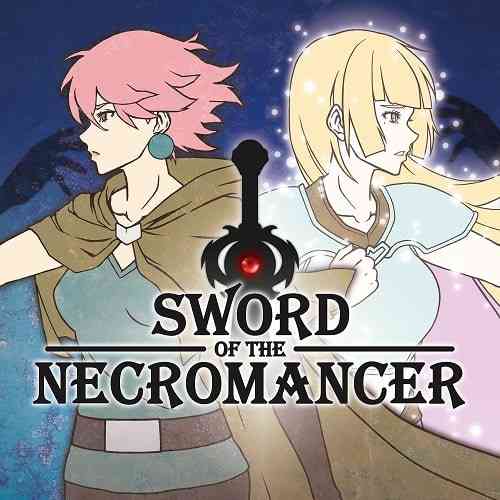