I’m going to try my best to not gush about Super Mario 3D World, but my goodness it’s been a long time since I’ve enjoyed a game this much. A fan of Mario since the days of the NES, I’ve played pretty much every game he’s appeared in. I have journeyed through the Mushroom World, spray painted my way around Isle Delfino, and travelled through many galaxies, all the while encountering Koopas, Goombas, Cheep Cheeps and Bloopers. But I daresay no Mario game has excited me as much of this newly released Wii U title.

Super Mario 3D World begins with fan favourite characters Mario, Luigi, Toad and Princess Peach (who for once is not the damsel in distress) who have all gathered together to watch some fireworks, only to find themselves whisked away down a pipe after an encounter with an adorable fairy princess and the infamous Bowser. Finding themselves in Sprixie Kingdom, they travel throughout different lands to rescue the seven Sprixie Princesses who are held captive in glass bottles so Bowser can steal their treasure. 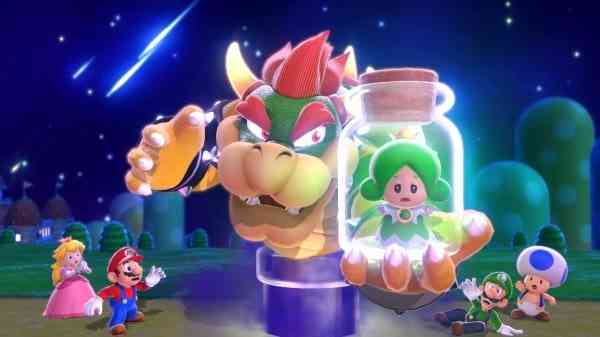 All four characters are playable, something that hasn’t been possible since the days of Super Mario 2 on NES. Mario is the same Mario we know and love, he can do a bit of everything, whereas Luigi can jump high to grab the stars that are out of reach, Toad can run super fast to grab coins just in the nick of time, and Peach delicately floats across platform to platform. I had a tendency to favour Luigi and Mario as I found Peach too slow and Toad’s voice downright irritating at times, but really, they are all quite enjoyable to play. There are platforms and puzzles that you’ll find in the game that are made for a particular character, unreachable by others, but there is always an alternate route, and levels can be completed regardless of your character choice.

Super Mario 3D World can be played alone, but is an absolute blast when playing with friends. It offers four player local co-op, using the Wii U GamePad and up to three Wii Remotes or Wii U Pro controllers. Fun, frantic and at times downright frustrating, things can get a bit crazy, but thankfully there is plenty of room for each player to fumble and bumble around the level. With points awarded at the end of each level (which reminded of the end of a Mario Party round) there is a fair bit of friendly competition. A crown is awarded to the player with the most points at the end of the level and it is wearable in the next level. Quite often you’ll find that you’ll attempt to knock it off to wear it yourself. You can also pick up and playfully hurl your friend off a cliff too (like my daughter did to me repeatedly). And, if a player strays too far behind, and the rest of the group progresses, they will be automatically moved up, much like previous Mario games. Players can drop in and drop out after completing a level, which is something that is quite handy for when the younger ones in your family grows tired of playing. Characters can also be switched before the start of each round giving everyone a chance to play as a different character if they so choose.

The controls are quite simple to master, using only two buttons throughout the majority of the game, which makes playing on the Wii Remote quite comfortable. Super Mario 3D World also makes great use of the Wii U GamePad. With a touch of an icon on the touch screen you can physically turn the GamePad to change the camera angle allowing you to check out what lies ahead or help you locate a star that you might not otherwise find. Platforms and blocks can be moved using the touch screen too, or they may require the player to blow into the GamePad’s microphone to raise them. 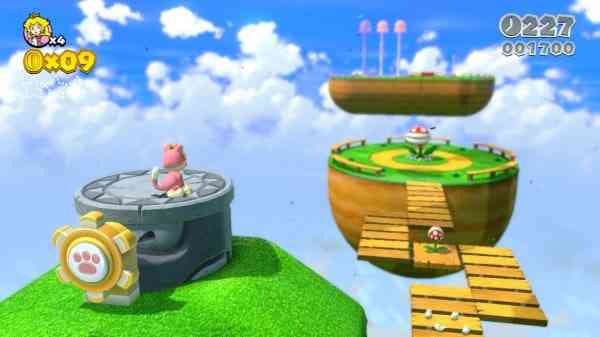 NES gamers most likely fondly remember the maps in Super Mario 3, and perhaps like myself, wonder what it would have been like to stray off the beaten path or to go off in any direction. The maps in Super Mario 3D World pay homage to these maps, following a linear path with a number of different levels to complete before reaching the end castle for that level. The really cool thing though is that the maps are meant to be explored so you can stray from the ‘path’ that leads you to the next level and find hidden surprises like 1Ups or try your luck at slot machines that randomly pop up throughout the world.

The levels themselves are cleverly designed and I can’t help but to wonder how the developers continue to come up with such creative and unique ideas. Regardless, they never grow tiresome and it is 3D platforming at its finest. You’ll recognize the themes of each world from previous games including water, ice, desert, and beach, but every single level feels unique and they are all extremely fun to play. I think of Level 2-3, Shadow Play Alley, where you see only shadows and silhouettes and has you rescuing a Toad cowering in fear from the shadow of Bowser, which ends up being a paper cutout. It is great. As is Level 5-6, Cakewalk Flip, where platforms turn with every jump and Bowser World, in World Castle 2, a not so amusing amusement park filled with Bowser’s minions, lighting torches to open a door much like you would in a Zelda game. My personal favourite though is Level 6-3, Hands-On-Hall, a Japanese inspired level filled with paper screens and Japanese music. Bottom line, there is never a dull moment and both my daughter and I constantly found ourselves in awe of all the cool things happening in every level, the weird and wonderful ways of reaching the next platform or defeating a boss. In addition to the regular levels, there are also puzzle based bonus levels found on each map, named “The Adventures of Captain Toad”, which reward the player with 5 stars when completed.

Speaking of stars, there are three to collect on each level. Taking cues from Mario Galaxy they are not really required to finish a level, but they are needed to unlock each world’s castle, and if your first play through is anything like ours, no doubt you will find yourself backtracking after discovering you are short stars to enter the final castle, which really isn’t a bad thing. There is so much to do, so many secrets to unveil, hidden rooms to find, walls to scale, and surprise boxes hidden in the shadows that going back to play through a level again is a pleasure. There are also a number of stamp pads to find throughout each world which can be used to post to Miiverse while in game, something that I absolutely love! The completionist in me is determined to go back and find each and every one of them. It’s great that a platformer such as this offers so much exploration, but that darn timer really put a damper on that. I frequently found myself rushing to the end after hearing the dreaded tone indicating you’re running out of time. Perhaps a more time, or elimination of the timer all together, would have been best for a game that offers so many things to discover, but then I suppose it wouldn’t be as challenging.  And my goodness, when you get into the later levels, it certainly can be tough! 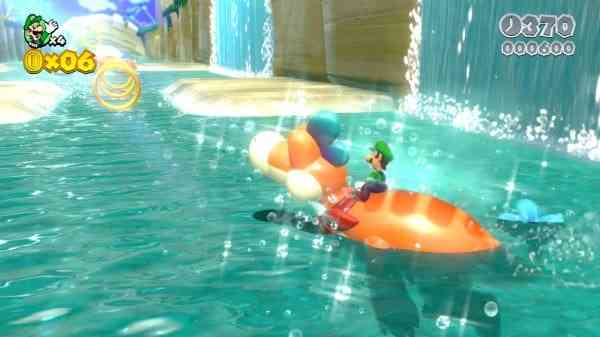 To aid your quest to rescue the pixie princesses there are a number of awesome power ups to use. Not only do the classic Super Star, Fire Flower and Super Mushroom suits return, but also the beloved Tanooki Suit and Invincible Tanooki Suit, which appears after you die repeatedly. There is also the newly added double cherry power up that when activated adds another Mario (or whatever character you may be playing), and when stacked adds up to four characters. There are also things that are dropped from enemies, such as a Goomba costume to fool your enemies, Koopa Shells that can smash through the enemies, and an Ice Skate that you jump into and glide along icy surfaces with ease. The best power up in the game, and quite possibly the entire Mario series, is the Cat Suit. When equipped, Mario and company can cling to and climb walls, pounce and claw at enemies, and paw at wheels to raise platforms. It is also quite handy when you reach the flagpole at the end – you can climb up to the top for an easy 10,000 points!

Mario games are widely known for their colourful and happy graphics, and Super Mario 3D World is no exception. Using a palette of beautiful vibrant colours the game’s environments are at times jaw dropping. I noted that the water effects are beautiful and I’ve never seen it look so spectacular or so realistic in a Mario game before. While Super Mario 3D World can be played Off TV on the GamePad, and it looks good, it just doesn’t do it justice. The game should be played on a TV to truly appreciate the beautiful HD graphics. As for the soundtrack and sounds, they are as vibrant and cheerful as the environments with some very familiar themes, and the careful ear will notice that it pays tribute to previous Mario titles and other Nintendo games like Zelda. I really like how the music becomes somewhat muted when a character is underwater, even in a little puddle, and it is only one of the many little details that made this game so amazing.

From beginning to end Super Mario 3D World is a whirlwind of clever level design, beautiful and vibrant visuals, insane four player co-op action, and extremely entertaining platforming gameplay. The newly added power-ups are a welcome addition and the Cat Suit is sure to be a fan favourite for years to come. There is no doubt that this is the best game available on the Wii U system to date, and in my opinion it may just be the best game in Super Mario history. Make no ‘ifs’ ‘ands’ or ‘buts’ about it, Super Mario 3D World is a must buy as it is the game Wii U owners have been waiting for.

Next LEGO Friends (3DS) Review – All I see is Friends, where’s the LEGO?
Previous Ratchet & Clank: Into the Nexus (PS3) Review – Can this Duo Do it One More Time on the PS3?